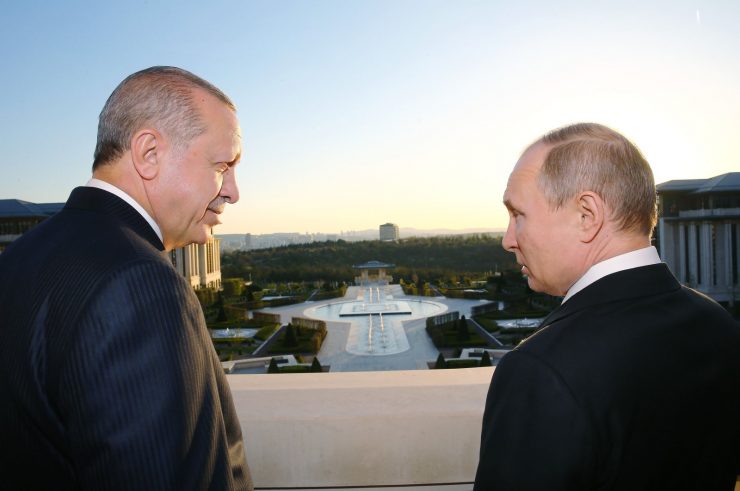 Russia – Turkey relations in the South Caucasus after the 2020 Karabakh war: View from Armenia

Russia – Turkey relations are probably among the most discussed topics of Eurasian geopolitics. Experts and pundits are frantically searching for the correct terms to describe them – cooperation/competition, the marriage of convenience, and frenemies – all these words are used in endless efforts to grasp reality beneath the surface of high-level meetings and smiley handshakes of the leaders. The two countries interact in different regions – Middle East, Northern Africa, Black Sea basin, Central Asia, Western Balkans, and South Caucasus. In all these areas, they have overlapping and colliding interests, which have created a complex web of relationships. Add to this an emerging great power competition between the US, China, Russia, and others and rivalry for regional hegemony in different regions between second-tier states – Iran, Turkey, Saudi Arabia- and we will have a rather complicated environment for Russia – Turkey relations.

Furthermore, all this is not only about geopolitics, but geo-economics too. For example, Russia supplies a significant amount of gas to Turkey via the web of pipelines – Blue Stream, Turkish Stream, Transbalkan pipeline, while using Turkey as a transit hub to export gas to Greece, Bulgaria, North Macedonia, Serbia, and later to Romania via Turk stream. In addition, Russia constructs the first nuclear power plant in Turkey, and before the COVID – 19 Russian tourists were flooding the Turkish resorts.

The complete analyses of the complex web of Russia – Turkey relations probably require a monograph or at least a particular dedicated volume. Meanwhile, in the last months of 2020, the focus of the bilateral relations was shifted from the Middle East and North Africa to the South Caucasus. On September 27, 2020, Azerbaijan launched a large-scale offensive along the whole line of contact with the unrecognized Nagorno Karabakh Republic. The war lasted 44 days and ended with an almost complete victory of Azerbaijan. From the very start of the war, Turkey was fully supporting Azerbaijan. Turkey’s President and ministers made multiple statements endorsing the war and criticizing the international community, which called for a ceasefire. Turkish support to Azerbaijan was not only verbal. Before the September 2020 war, Azerbaijan and Turkey organized large-scale joint military drills; Turkey provided modern offensive weaponry to Azerbaijan, including Bayraktar attack drones. Turkish military advisers and operators were directly involved in the conflict, and according to multiple sources, Turkey deployed Syrian mercenaries to the Nagorno Karabakh battlefield, who proved their usefulness several months ago in Libya. Since the beginning of the war, many in Armenia were looking to Russia. Armenia was a member of Russia-led military and economic organizations and signed a mutual defense treaty with Russia back in 1997. Russian security guarantees legally did not cover the unrecognized Nagorno Karabakh Republic; however, there was a widespread perception in Armenia that alliance with Russia would prevent the involvement of Turkey in the war in Karabakh, while Armenia should contain Azerbaijan. From the beginning of the war, Russia made public efforts to stop the war. Russia invited Armenian and Azerbaijani foreign ministers to Moscow to negotiate over the establishment of a ceasefire on October 9. However, the ceasefire agreement was broken by the Azerbaijani side minutes after taking into effect. Russian President Vladimir Putin discussed the Nagorno Karabakh issue with his Turkish counterpart several times. The last such discussion took place on November 7, 2020, three days before the signature of November 10, 2020, tripartite Armenia, Azerbaijan, and Russia statement, which put an end to the hostilities, opened the way for the deployment of the Russian peacekeepers into the Nagorno Karabakh and envisaged the opening up of transportation routes between Armenia and Azerbaijan including passage of goods from Western regions of Azerbaijan to Nakhijevan Autonomous Region via Armenia. January 11, 2021, Russia, Armenia, and Azerbaijan’s trilateral statement envisaged additional steps to push forward the opening of communications.

Since the end of the 2020 Karabakh war Armenian expert community and political circles have been hotly debating the role of Russia and Turkey before, during, and aftermath of the war. Two contradicting narratives prevail. The first argues that the war resulted from some Russia – Turkey – Azerbaijan understanding to change the status quo in Karabakh. According to this logic, the status quo was hindering the growth in Russia – Azerbaijan relations. As a result, Azerbaijan sent explicit messages to Russia that it was ready for deeper cooperation with Kremlin, but only after the status quo would be changed in favor of Azerbaijan.

Meanwhile, Armenia did not offer any long-term agenda to Russia, simply demanding from Russia to protect the current status quo because of Armenia – Russian alliance and Armenia’s membership into Russia-led economic and military organizations. Meanwhile, Russia was not satisfied by only having substantial influence over Armenia in the South Caucasus and desired to increase its connections with Azerbaijan. Simultaneously, Russia wanted to deploy only Russian peacekeepers in Nagorno Karabakh as was stipulated in the “Lavrov plan”, while OSCE Minsk Group Co-chairs elaborated basic elements of the settlement required the deployment of an international peacekeeping force.

This narrative argues that probably Russia and Azerbaijan reached an agreement on implementing the Lavrov plan in 2019. It envisaged the withdrawal of the Armenian forces from the five regions outside of the former Nagorno Karabakh Autonomous Region, deployment of the Russian peacekeepers along the new line of contact, withdrawal of Armenian forces from other two regions after a while, and continuation of negotiations to fix the final status of Nagorno Karabakh. However, after Armenia rejected the Lavrov plan in spring 2020, simultaneously refuting the OSCE Minsk Group Co-chairs proposed Basic Principles of the settlement, it paved the way for Azerbaijan to start the war.

The initial understanding was probably reached between Russia and Azerbaijan, and then they briefed Turkey about the deal. The proponents of this theory argue that Russia was the state which benefited the most from the war. Russia increased its military presence in Armenia, deployed additional Russian troops in the Syunik region, established its military presence in Nagorno Karabakh, and got rid of the biggest obstacle to foster a strategic partnership with Azerbaijan. It may envisage Azerbaijan’s inclusion into the Eurasian Economic Union, or at least using Azerbaijan to have railway connections with Turkey circumventing Georgia through Russia – Azerbaijan – Armenia – Nakhijevan Autonomous Republic – Turkey link. Meanwhile, Russia keeps the necessary leverage to cut Azerbaijan from Nakhijevan and Turkey anytime it wants, as the communications through Armenia will be controlled by the Russian border troops.

Meanwhile, Turkey also benefited from the war. It increased its influence over the Azerbaijani military establishment and significantly improved its image among the Azerbaijani society while getting additional railway and highway connections with Azerbaijan in parallel with routes passing through Georgia.

The second narrative argues that the war resulted from Azerbaijan – Turkey agreement probably endorsed by the UK to defeat Russian regional ally Armenia, trigger anti-Russian sentiments there, and increase Turkey’s role in the South Caucasus at the expense of Russia. The proponents of this argument believe that the 2020 Nagorno Karabakh war was the first step in the long–term strategy to push Russia out of the South Caucasus. Then emboldened Turkey will destabilize the Russian Northern Caucasus and the Iranian territories inhabited by the Azeri-speaking population spreading Panturkism ideology there. Meanwhile, according to this narrative, the final goal of increased Turkish influence in the South Caucasus is to provide Ankara a launchpad to use the region to spread Panturkism ideologies in Central Asia to further pressure China by stoking extremism in Xinjiang. The full implementation of this scenario envisaged the complete control of Nagorno Karabakh by Azerbaijani forces, removal of all Armenians living there, using the loss of Nagorno Karabakh as a tool to trigger anti-Russia sentiments in Armenia by accusing Russia of having a secret deal with Turkey and Azerbaijan. The second step would be the denunciation of Armenia’s membership into the Collective Security Treaty Organization and Eurasian Economic Union, which would end the Russian influence in the South Caucasus.

Thus, Russia was caught by surprise watching active Turkish involvement in the 2020 Karabakh war. However, Kremlin prevented the implementation of this scenario. Instead, Russia did now allow the complete invasion of Nagorno Karabakh by the Azerbaijani army. Furthermore, it forced Armenia and Azerbaijan to accept the deployment of the Russian peacekeepers in Nagorno Karabakh and pressed Armenia to allow Russian additional military presence in Armenia. The only uniting theme in these two contradicting narratives is the acceptance that Russia increased its influence in both Armenia and Azerbaijan after the 2020 Nagorno Karabakh war. As a result, the war had three beneficiaries – Russia, Azerbaijan, Turkey, and Ankara got only third place in this list after Moscow and Baku.