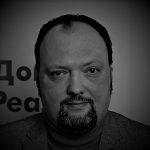 Head of the Strategic Modeling Section