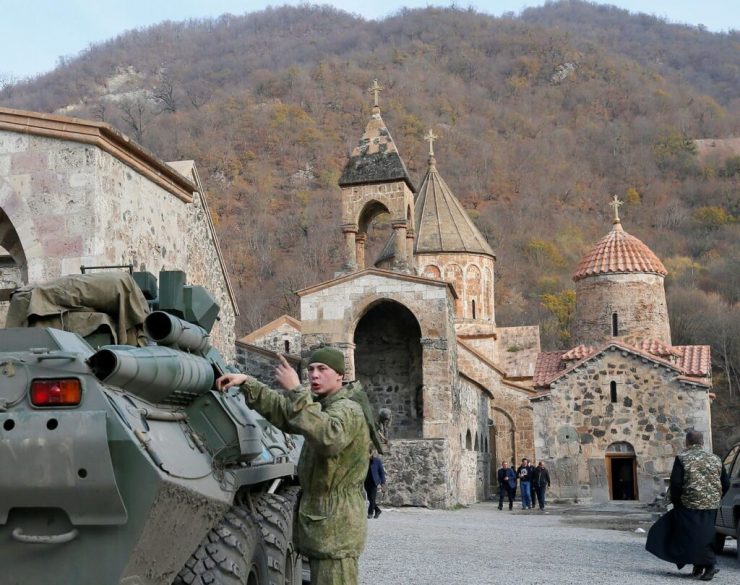 The future of Nagorno Karabakh

The 2020 Karabakh war has significantly changed the geopolitics of the South Caucasus. The new variables are the more influence of Russia and Turkey and less role for the US and EU. Moscow and Ankara continue their partner relations. Their significance for Kremlin was emphasized by the statement of the Russian Ambassador in Turkey and by the comments of the official spokeswoman of the Russian MFA Maria Zakharova on the occasion of the 100 anniversary of the 1921 Russia – Turkey Moscow Treaty. The Russian Defense Minister Sergey Shoigu, in his recent interview, stated that Russia – Turkey relations were complicated because of Turkey’s membership in NATO. However, the two sides were able to implement joint de-escalation operations in Syria and, most recently, in Nagorno Karabakh.

The part of the unrecognized Nagorno Karabakh Republic, which was not taken by Azerbaijan during the recent war or not given to it after the November 10 Russia – Armenia – Azerbaijan trilateral statement, is under strong Russian influence. We cannot use the term control while describing Russian role in Nagorno Karabakh as local government bodies such as President, Parliament, Government, National Security Council, and local municipalities continue their activities. However, Russia’s position in Nagorno Karabakh tatters between strong influence and actual control; all security-related issues are being solved through consultations with the Russian peacekeeping force’s leadership.

All conflict parties except Nagorno Karabakh and Armenia are satisfied by the recent war’s outcome, albeit the degree of their satisfaction differs. The ideal solution for Azerbaijan could be Azerbaijani control over the entire Nagorno Karabakh with no Russian peacekeepers there. However, ideals usually do not materialize, and the current situation is the best possible scenario for Azerbaijan. Most probably, at the beginning of the war, Azerbaijan could not hope to retake not only all regions outside of the former Nagorno Karabakh Autonomous Oblast but also 30 percent of territories of the oblast itself. Turkey would like to see numerous Turkish peacekeepers deployment along the new line of contact instead of sending mere 60 Turkish soldiers to serve along with Russian colleagues in the joint Russia – Turkey monitoring center located outside of the former NKAO. However, as a result of the war, Turkey has significantly increased its influence over Azerbaijan. If Turkey forces Armenia to cancel the Armenian Genocide recognition campaign and open up Armenia for Turkish investments and businesses, it may soon get economic and later political influence in Armenia too. Russia perhaps could be unhappy with Turkish soldiers officially being deployed in Azerbaijan, but in general, Russia has fulfilled all its strategic goals in Karabakh.

What lays ahead for Karabakh? According to November 10 trilateral statement, Russian peacekeepers will stay in Karabakh at least until November 2025 but may leave after if Armenia or Azerbaijan demands their withdrawal. Before seeking to analyze the possible future of Nagorno Karabakh, let’s first understand which states may shape the region’s future. First and foremost, it is Russia, which has boots on the ground and different ways to stay there after November 2025.

Turkey also has the capabilities to impact the situation. Turkey has a much broader agenda with Russia, which covers Syria, Ukraine, the Black Sea basin, Libya, and in all these issues, Turkey has leverage on Russia. Azerbaijan may apply to the international community if, despite its clearly stated intentions, Russia refuses to leave Karabakh after 2025. The US may influence the situation, albeit to a lesser extent than Russia and Turkey, using its Minsk Group Co-Chair position. However, the US lacks serious tools to shape the developments. The most tangible way for the US is to act through Turkey using Ankara’s capacities in the region if there is some US-Turkey rapprochement. The EU has no ambitions to play geopolitical role in the region. It does not view South Caucasus and Nagorno Karabakh in particular as an arena for geopolitical competition with either Russia or Turkey and believes that the EU will find its niche in the region alongside Russia’s and Turkey’s presence. EU will continue its support to Armenia within the CEPA framework and seek to sign a new agreement with Azerbaijan. EU will increase funding for humanitarian assistance and numerous confidence-building initiatives seeking to involve Armenian and Azerbaijani NGOs.

Armenia has the least possibilities to shape the future of Nagorno Karabakh. Being defeated and forced to sign capitulation, Armenia lost the little geopolitical significance it had before the war. Since November 10, 2020, President Aliyev has publicly insulted the Armenian Prime Minister and Armenia as a state many times, receiving zero response from the Armenian leader. The international community and powers involved in the region have fixed the behavior of the Armenian leadership. They have come to a clear conclusion – Armenia has no ability to defend itself, Armenian leaders have accepted the capitulation and are ready to implement every single whim of the Azerbaijani President.

May the situation change if leadership change takes place in Armenia? Some changes are possible. President Aliyev may receive tough answers for his personal insults. Armenia may propose using Ghazakh – Ijevan – Yerevan – Nakhijevan railway and highway to connect Azerbaijan with Nakhijevan and Russia with Turkey instead of using the territory of Syunik, but no changes are possible at the strategic level. Regardless of the results of the upcoming June 20 snap parliamentary elections in Armenia – Pashinyan keeps Prime Minister’s position or Armenia has a new Prime Minister, Armenia’s dependence on Russia will not decrease. Some hope that the snap parliamentary elections may end the political crisis in Armenia, and a new government will be formed with a new mandate. However, most probably, the real battle during the campaign will be between Pashinyan and the second president, Kocharyan, with the participation of forces associated with the first president, Levon Ter Petrosyan, and the third president, Serzh Sargsyan. Armenia’s problem is that all these four figures are deeply polarizing political actors. Defeat in the recent Karabakh war has only increased the animosity between their supporters.

After the 2020 war Armenia has abandoned its obligation to guarantee Nagorno Karabakh security and de facto has transferred to Russia the authority to protect the Southern Syunik region’s security. In this context, Armenia’s dramatically decreased agency will be kept in its current lowest point, and Armenia will be mostly a pawn in Russia-Turkey or Turkey-US negotiations.

The future of Nagorno Karabakh is unclear and murky. If Russia leaves Karabakh after November 2025 for any reason, new Russia – Turkey deal, US successful efforts to push Russia out from the South Caucasus, internal instability in Russia, Armenians will be forced to leave Karabakh and resettle in Armenia or other countries.

If Russia remains in Karabakh – several options are possible. Russia may prolong the November 2020 statement with the same conditions, and Russian troops will remain there for another five-year term until November 2030. Let’s suppose significant deterioration of Russia – Turkey relations happens, akin to November 2015 crisis, and Azerbaijan, under Turkey’s pressure, refutes Russia’s offer to extend Russian troops’ deployment in Nagorno Karabakh. In that case, Russia may recognize NK independence within the current line of contact and sign an agreement with NK authorities to deploy a permanent Russian military base there. Russia’s best scenario is the prolongation of the Russian peacekeepers’ deployment in Nagorno Karabakh for another five years with the same conditions. In all scenarios, however, the key variable is Russia’s vision and Kremlin’s capabilities to protect its interests in the South Caucasus.