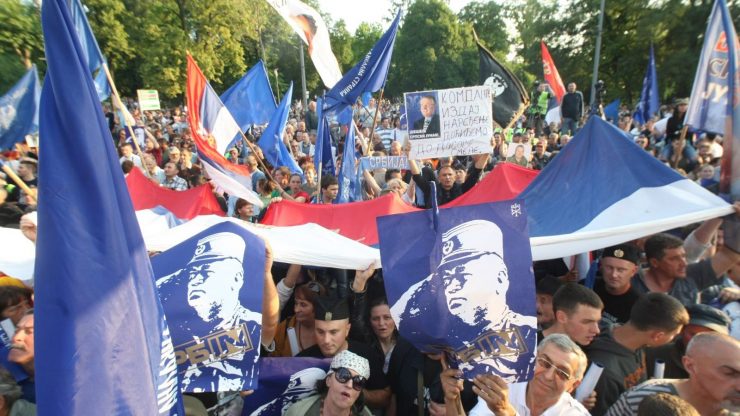 Bosnia and Herzegovina as well as Serbia are at an early stage of preparation in the area of judiciary transformation of civil service. There was no progress on ensuring a professional and depoliticised civil service and a coordinated countrywide approach to policy making. These countries  have no legal restrictions to prevent people who were convicted of war crimes from working in the country’s public services or administration. This situation causes fear among war victims and undermines the rule of law.

Trouble in the Balkans is never far away, with the peninsula crisscrossed with religious and ethnic fault lines. But one more revolting problem is appointment to state offices of former war criminals.

The details of the crimes of Blagoje Simic, the Bosnian Serb politician in the Bosanski Samac municipality during the war were clearly set out in the in the guilty verdict issued by the International Criminal Tribunal for the Former Yugoslavia in The Hague in 2006. Simic was sentenced to 15 years in prison for assisting in the prosecution of non-Serbian civilians in in Bosanski Samac in 1992 and 1993. The UN Court said that the civilian population had been illegally arrested, imprisoned in inhuman conditions and and made to do forced labour.

In addition to Simic, personnel involved in human rights violations in the former Yugoslavia have returned to public office in BiH. The impunity of these civil servants has a detrimental effect on the rule of law in local communities. Another of the accused in Hague who was dismissed is Simo Zarichev and who was tried along with Blagoe Simic. After his release, Zaric was elected Deputy Mayor of Bosanski Samac in 2008. The Hague Tribunal sentenced Zaric to six years in prison for crimes against humanity in Bosanski Samac, including inhuman treatment, torture and beatings of non-Serb civilian prisoners.

Branko Grujic, who was sentenced to six years by a Belgrade court for wartime crimes in Zvornik, also returned to politics after his release, running as a candidate for the 2012 Serbian Democratic Party elections. During the Bosnian war, Grujic headed the provisional government of the so-called Serb Municipality of Zvornik, which imprisoned more than 900 Bosniaks from several villages near Zvornik in detention centres.

In accordance with the BiH legislation, after serving a sentence in prison, former convicts return all their civil rights, and no measures prevent them from participating in politics or public service. The law says that even those who are suspected of war crimes, if they voluntarily surrender to the Hague Tribunal, can run for elections. Similar provision is included in Law on Civil Service in the Institutions of Bosnia and Herzegovina: “A civil servant shall lose his civil service status in the following cases: (…) conviction against him/her for a criminal offense and due to his/her serving of the prison sentence must be absent from work in the civil service for more than six months”.

A Serbian commander in the Kosovo War Vladimir Lazarevic has been offered a job teaching at Belgrade’s military academy. The government is not bothered by the fact he was jailed for war crimes. The UN Tribunal in The Hague handed him a 15-year prison sentence in 2009, which was reduced on appeal. The court was convinced that Lazarevic and other high-ranking officers had organized and participated in systematic and massive “ethnic cleansing”. Lazarevic was granted early release in 2015 after having served two-thirds of his sentence.

Another war criminal who has essentially been rehabilitated in Serbia. Veselin Sljivancanin, whom the Hague court convicted of war crimes perpetrated in the Croatian city of Vukovar, regularly participates in panel discussions organized by Serbia’s ruling Progressive Party.

The legal aspects of the situation are not in dispute in Serbia: a person is tried and convicted, serves time, is released and is supposed to become a full-fledged member of society once again.  According to the Law on civil servants of Republic of Serbia, requirements for employment to civil service, among others, include: : “…a person who is legally an adult, has the nationality of the Republic of Serbia, has prescribed professional qualifications and fulfils other requirements prescribed by law, other legislation or Regulation on internal organisation and systematisation of job positions may be employed as a civil servant, if his or her employment relationship was not earlier terminated due to grave breach of obligation from the employment relationship and if he or she was not convicted by prison sentence of at least six months”.

The conditions for access to public service are objectively different in different countries, however, a number of requirements can be distinguished that are common to most countries. The preconditions are, in particular, that the applicant has no criminal record for a position in the public administration. In the overwhelming majority of cases, this requirement applies only to persons who have committed intentional crimes. The absence of restriction or deprivation of the right to hold public service positions, as determined by court, can be equated with the absence of a criminal record.

At the same time, the restrictions imposing a de facto lifelong ban on running for office are excessive. The state has the right to prohibit the exercise of the right to be elected outside the served term of punishment; to impose restrictions on persons with a criminal record for a certain period (taking into account the degree of danger of the crime committed) to hold public office. So, restrictions can be implemented, the state has the right to impose them, based on one or another basis, but they should not be indefinite. Such conclusions were made on the basis of the requirements of international legal norms, in particular, the UN Convention against Corruption, the United Nations Convention against Transnational Organized Crime, as well as the Council of Europe Criminal Law Convention on Corruption. Similar conclusions are contained in some decisions of the European Court of Human Rights, adopted on the claims of citizens of Belgium, Great Britain, Austria, Lithuania and Italy.

So, the appointment of people previously convicted of war crimes runs counter to EU principles that Belgrade and Sarajevo are seeking to join. In addition, the EU has repeatedly expressed hope to see that political leaders respect the victims of past conflicts and sincerely promote reconciliation in the Western Balkans. Allowing freed war criminals and individuals indicted for war crimes to be candidates for public office has serious implications for political reforms in the Western Balkans.These networks of former local level officials have the ability to influence reform processes, particularly with regard to war crimes and organised crime. Moreover, the continued presence of perpetrators of wartime crimes in public office make refugees reluctant to return to the homes they left during the 1992-95 conflict.