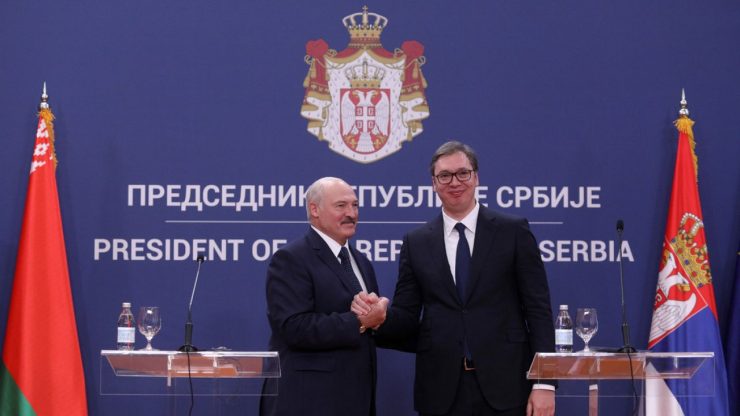 A title on nova.rs, one of Serbia’s most read portals critical to the government, from 21 June 2021 says “Serbia introduced sanctions to Lukashenko secretly”. And indeed, following what were years of intensive economic and political cooperation, the news that Serbia had joined on 26 August 2020 the European Union (EU) highly critical positions against Belarus, came as a surprise. At the time, both Serbia’s government and the Ministry of Foreign Affairs made no public reference to the decision, which stated that during the election campaign, the citizens of Belarus “showed a desire for democratic change, but that the elections were neither free nor fair.”

At the time, the news of the imposition of sanctions on Belarus came just days after Serbian Armed Forces ended military exercises with the Belarusian army. Prime Minister of Serbia, Ana Brnabić, stated that she hoped that President of Belarus, Alexander Lukashenko, “would not hold it against us (Serbia)”. While this statement was seen as an example of, either, naivete or duplicity in international relations (depending on who was commenting) when taken against government’s key interests it is really not that surprising, as we shall see.

Observed in chapter 31 of Serbia’s accession process, and primarily driven by concerns over its Kosovo policy, harmonization of Serbia’s foreign policy with the EU has fell to 56% as of 2020 (51 out of 91 foreign policy declarations). Yet when it comes to Belarus, right up until now, the state has supported EU’s positions. Brussels has so far imposed three rounds of sanctions against Minsk, enforcing a property freeze and a visa ban on 88 individuals and seven entities. Serbia however did not support sanctions of 21 June against 78 Belarusian citizens and seven entities for serious human rights violations and repression of civil society, the opposition and journalists, and for forced landing of EasyJet plane. One of the reasons might be that Lukashenko’s son Dmitry and the wife of his eldest son, Lilia, are also on this list. It must be noted that among candidates for membership Serbia is the only country that did not support this set of sanctions. However, Council’s second decision, also from 21 June, adding another entity to the list of persons and entities-imposed sanctions – the state-owned air traffic control company – Serbia did join. Also, in connection to this, Belgrade supported the decision of the EU Council, made on 4 June, to tighten the existing punitive measures by introducing a ban on flying to all Belarusian airlines through EU airspace and a ban on access to EU airports.

Why is Belgrade so reluctant to talk about its relationship with Minsk? In the words of Serbia’s long-serving former Ambassador to Minsk, Srecko Djukic, while Brussels is being informed that Serbia is joining, it remains to be seen how strictly its authorities will apply the regime, having in mind the closeness of relations. Since 2012, the government has been supporting the Belarusian authorities in international forums and Serbia has not voted against Belarus. In result, harmonization of Serbia’s foreign policy has fallen from 78% to 56% – not only because of the support for Belarus, but also for Russia, China and other countries that are on the EU agenda.

Djukic points out that this is only the first round of sanctions that the EU has imposed on Belarus. According to him, there are as many as “10 measures that Brussels plans to introduce, step by step” towards Lukashenko’s regime, including holding “an international conference on Belarus”. There is, continues Djukic, a “set of economic measures, including a ban on the export of very important items, such as gasoline and oil products, which can greatly affect the economy of that country”.

It is hard to imagine Belgrade joining sanctions that would be even more punitive. There are economic interests – Serbia is a market for a number of Belarusian producers, i.e., heavy machinery, transport vehicles and agricultural equipment. Since 22 February 2019, refurbishment of Serbia’s MiG-29 fighter jets has been ongoing in a Belarus state-owned “Aircraft Repair Plant No. 558” in Baranovichi, with the last four airplanes arriving just a month ago. Belarus has not recognized Kosovo, and with the prospect of the conflict “freezing”, allies will be needed even more than now. Furthermore, Belarus is one of the countries with which Belgrade is developing intensive bilateral relations, partly to counterbalance difficulties it faces in the region itself and a way to – somewhat paradoxically, taking Lukashenko’s regime image – avoid international isolation. You need friends in international forums who will not ask unpleasant questions about the internal organization of your country.

On the other hand, if there is one issue Belgrade would be ready to compromise over, in order to increase its level of harmonization, it just might be its relationship with Minsk; just as long as not being pushed to follow the EU on every single point of the renewed or enlarged sanctions regime. Relationship with Russia and China, as permanent members of the United Nations Security Council remains more important. Belgrade will therefore make a calculated choice; explaining to Minsk, at the same time that they had not lost an ally. This does present country’s foreign policy as opportunistic or “principally unprincipled” and when the time comes, Belgrade will have to do a lot of explaining. We assume there will be understanding in the capital of Belarus as well: holding a joint military exercise (with armed forces of Serbia, Belarus and Russia participating), less than a year after previous exercise was cancelled at the last moment, presents a strong signal of commitment than agreeing to join resolutions adopted by EU institutions.

Executive Director of the Belgrade Fund for Political Excellence