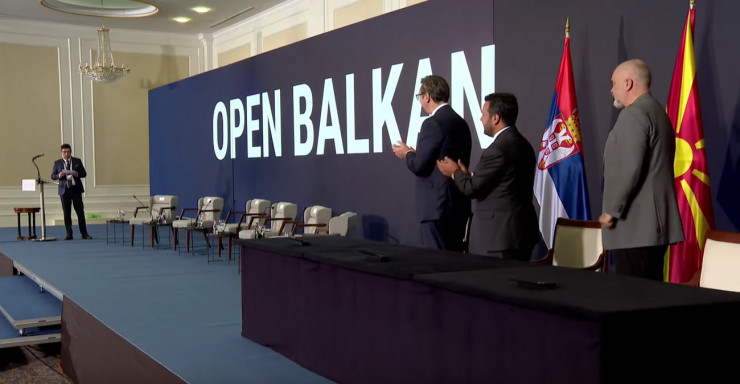 The “Open Balkan” instead of a closed EU

Against the background of an actual stalemate in the question of EU enlargement, a parallel integration processes are taking place in the Balkans. Serbia, Albania and North Macedonia who look “offended” by Brussels, are intensifying the cooperation between them within the framework of the “Open Balkan” initiative. In addition to the purely economic motives for participating in the initiative, which are declared by their leaders as the main ones, they also pursue their own domestic and foreign policy goals. At the same time, there are weighty arguments to believe that the political motives of the leaders of the “Open Balkan” member states, in particular, the desire to express their displeasure to the EU, prevail over the economic ones.

As a result of the forum, the three countries signed three documents, one agreement and two memorandums. The agreement envisages regional cooperation on natural catastrophes, allowing the three countries to cooperate closely not only in prevention, but also in giving and coordinating mutual aid during earthquakes, storms, fires and other disasters. The first memorandum refers to easing trade, scrapping unnecessary paperwork and speeding up the transport of goods at border crossings. One idea discussed was opening special fast tracks at border crossings for Balkan citizens so that they have priority to pass. The third memorandum envisages practical unification of labor markets, by more easily issuing work permits for citizens of one country in the other two, mutual acceptance of diplomas and job qualifications, all making work forces more flexible and available and hopefully so attracting more investment.

The very name of the “Mini Schengen” initiative has been changed to “Open Balkan”, and it was stated that it is open to all other countries in the region.

Apart from the purely economic motives for participating in the initiative, which were emphasized by the leaders of the member countries, in particular, that this is being done for “economic, regional development and a better life for every citizen of the Western Balkans”, their statements and comments on the EU were still interesting. Those contained quite noticeable note of grudge against Brussels and revealed other motives of the countries to participate in the “Open Balkan”.

Thus, the North Macedonia’s Prime Minister Zoran Zaev expressed disappointment that “the EU is not fulfilling its promises”. Zaev stressed that EU’s failure to fulfill its promises because of the bilateral issue with one EU member, even though both North Macedonia and Albania have met all entry criteria, is “against the European idea, against the interests of the EU itself” and that Western Balkan countries “cannot wait for all of the EU’s internal problems to be solved” in order for the region to move forward. He was also supported by the Serbian president: “We know there’s enlargement fatigue in the EU. We need to see what we can do for ourselves instead, what we can do for our people, how we can expand our markets”. In addition, while in Skopje, Aleksandar Vucic decided to play on the feelings of Macedonians, saying the following: “We have nothing to ask from the citizens of Macedonia, except friendship and brotherhood. We do not need your territory, and we do not tell you that you speak our language. It is only important for us to have the closest and best possible relationship”. This was a clear sting towards Bulgaria, whose veto in the EU is the main reason for postponing the question of North Macedonia’s joining the EU for an indefinite period of time.

For his part, Albanian Prime Minister Edi Rama compared the cooperation with Brussels to Samuel Beckett’s play “Waiting for Godot”.

Such statements by Western Balkan leaders have once again given many reasons to regard the “Open Balkan” as a response from the three countries to the disappointment with the stalemate they have found in the question of their EU integration. In the context of an uncertain European future, the leaders of the initiative’s member countries – primarily Serbia and Albania – are trying to use it as a lightning rod from the actual “European failure” and to strengthen their international and economic positions. For Serbia, who being an EU candidate simultaneously concludes a free trade agreement with the Eurasian Economic Union and develops close relations with China, the participation in the “Open Balkan” initiative goes in line with its foreign policy strategy, which is often characterized as sitting on different chairs.

As for North Macedonia, it quickly joined the Serb-Albanian initiative, as after a series of disappointments in relations with Brussels, Skopje has seen a great opportunity to finally show its citizens a real foreign policy success. In addition, the leadership in Skopje believes that in this way they will show both the EU and Bulgaria that despite the latter’s veto, North Macedonia, which is striving for development, is not going to sit in its hands and is looking for alternative ways.

As for other Western Balkan countries, in particular Bosnia and Herzegovina, Montenegro and Kosovo, despite Alexander Vucic’s statements about the openness of the “Open Balkans” to everyone in the region, they are currently not showing much desire to join the initiative. Each country has its reasons for this. Bosnia and Herzegovina, for example, because of its constant internal turmoil, and Montenegro because of the fears that it may in some way jeopardize its status of a leader (compared to others) in the EU integration process. Kosovo, on the other hand, flatly refuses to be part of the initiative and sharply criticizes it. Even before the meeting in Skopje, Kosovo Prime Minister Albin Kurti called the idea of ​​“Mini Schengen” as “visionless”, and called for the region to enter a trade agreement with the European Union instead. For her part, Kosovo Foreign Minister Donika Gervalla ruled out the region’s need for such initiatives, saying that “It creates the idea of conveying a message that there is another alternative apart from the region’s joint path to the EU, which is as dangerous as delays in European integration”.

Some also believe that the reason why three other countries have serious reservations about the initiative and are in no hurry to join it is that they see the “Open Balkans” as Belgrade’s attempt to return to the former Yugoslavia and increase Serbia’s influence as the region’s strongest economic player.

It is also interesting that not everyone in the initiative’s member countries is happy about participating in it. For example, Genc Pollo, former Albanian Minister of Innovation and Information Technology and one of the founders of the Democratic Party of Albania, notes that all six Western Balkan countries are already members of the EU Common Market (which is supported by the EU). The fact that Kosovo, Bosnia and Herzegovina and Montenegro refuse to participate in the “Mini Schengen” (“Open Balkans”) makes it a factor of division in this region with a difficult past, which is not useful at all. Therefore, according to Pollo, “Mini Schengen” (“Open Balkans”) is “a useless replica of the Common Regional Market”.

The opposition VMRO-DPMNE party in North Macedonia has also harshly criticized Prime Minister Zaev for participating in the initiative, calling it an alternative to EU membership. “Macedonia belongs to the wider European family of countries and such attempts of Zaev to show a multilateral cooperation of the Balkan countries as a huge diplomatic success is in fact a diplomatic failure to achieve the goal – EU membership”.

Therefore, the more active the cooperation within the framework of the “Open Balkans” is and the more active the initiative is promoted by the leaders of the participating countries, the more it feels like this is nothing more than the intention of three “offended” countries to exert political pressure on Brussels in order to make him finally open his door to them. Will the EU fall under such a kind of “Western Balkan blackmail”? – It is unlikely. After all, Brussels is primarily interested not in the maneuvers of Belgrade, Tirana and Skopje around the “Open Balkans”, but in the implementation of the reforms, necessary for joining the EU. And here the members of the “Open Balkans”, especially – the main ideologist of the initiative, Serbia – actually have very modest success. Therefore, the Western Balkan trio may continue to develop and promote the “Open Balkans”, but this is unlikely to facilitate or accelerate their accession to the EU. Although, for the domestic consumers, in the conditions of blocking European integration, the participation in the initiative, of course, will be presented as a great foreign policy victory.