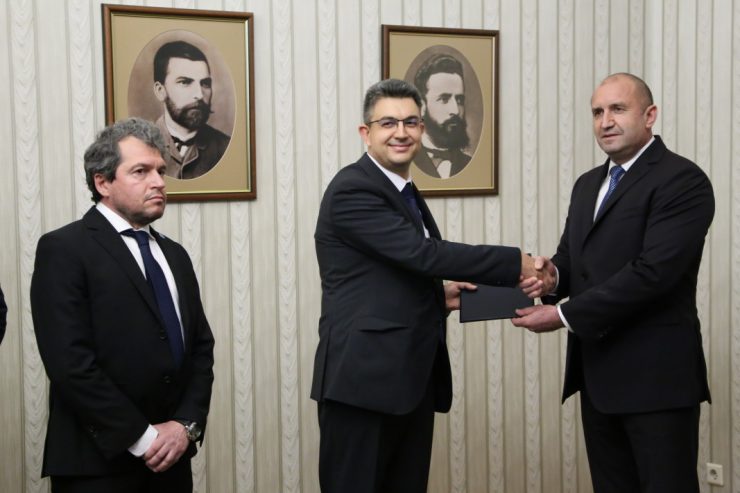 After these negative public reactions, Trifonov and his men took a slight step back, withdrew their nominee for Prime Minister and promised to comply with the criticism. However, after their election victory over GERB, although minimal, was confirmed by the official results, they apparently decided to act from a position of strength, saying they would form a minority government, relying on floating majorities on various issues and topics. However, they entered into negotiations with their potential allies to negotiate support for specific common priorities, declaring that they would not negotiate only with GERB.

This behavior charged the new consultations with tension and mistrust from the very beginning, especially after the ITN people also met with MRF representatives, with whom the other protest parties refused any contact due to MRF ties with the young oligarch and former MRF MP Delyan Peevski. The latter owns large companies in various industries and enjoys obvious privileges and favors in winning public tenders for huge contracts. He also controls a number of media outlets and has recently been subjected to severe US sanctions under the so-called Magnitsky Act.

Both sides in these consultations, but especially ITN, flatly refuse to talk about a governing coalition. Fearing the unpredictable behavior of the ITN, however, the DB and IBG as well as BSP are pushing for the agreed political priorities to be written down in some form of agreement. They also insisted on knowing in advance who the people in the future government of the ITN minority would be, and that made perfect sense, because it was these ministers who would have to implement the agreed priorities and make the profound and difficult changes the country needed and voted for.

But ITN refuse to sign an agreement, arguing that they expect support for policies and do not want to bargain. In response, they detonated a new “bomb”, accusing their potential partners of looking for “warm positions” and even allowing themselves to bring out dubious compromising information against Finance Minister Asen Vassilev, a key figure in President Radev’s caretaker cabinet. There were hints in the media that the compromising material in question was supplied by the MRF.

The ITN frontmen in parliament used their “disclosure” as a motive to deny any inclusion of caretaker ministers in their government. This obviously overflowed the patience of the president, who surprisingly invited ITN parliamentary leaders the same day and handed them a mandate to form a government, thus forcing them to reveal their candidate for prime minister and forcing the constitutional procedure that binds the candidate to present within 7 days the structure and composition of the government, which will be proposed for approval by the parliament.

This was an obvious demonstration of the irritation of the president with Slavi Trifonov’s party and exposed the growing rift between them.

Another surprise followed – ITN brought to the president as a candidate for Prime Minister their MP Plamen Nikolov – a 44-year-old little-known businessman, a high-ranking employee in an international company. Several days earlier, the name of another young constitutional lawyer from Sofia University, Petar Iliev, was linked to this key position with mixed reviews.

Thus, ITN and DB got into a dispute again whether Iliev was really ITN’s original nomination for prime minister and whether Trifonov’s team did not decide to replace him as prime-minister nominee at the last moment with Nikolov after Iliev was accused to have plagiarized texts from a colleague’s book into his monograph on the competences of the People’s Assembly.

Now, both political observers and many ordinary voters are wondering why ITN is acting in the dark and putting its potential partners in front of fait accompli. Is this only an expression of political inexperience or of some unannounced intentions and hidden political dependencies of Trifonov’s party, and isn’t Trifonov himself, who has for quite a long time disappeared from public view and his whereabouts are not even known, a tool of behind-the-scenes forces? Is such behavior reasonable for a party that has only 65 members in the 240-seat parliament and clearly needs parliamentary support for its minority government? Can ITN afford to act that way?

Thus, the question of whether a parliamentary majority for a profound change can be achieved remains open. Intensive political consultations are under way, but in the atmosphere of suspicion and mutual reprove there are not many grounds for optimism. DB, IBG and BSP, the three parties that ITN could count on to support a minority government constructed by Trifonov’s party alone, have already stressed that they will decide on their attitude after seeing the proposed cabinet and its political priorities agreed in some form of written consent.

The exotic option of forming a government even without the support of the protest seems likely, because almost all parliamentary forces are interested in having one, no matter what they say.

For GERB and the MRF, the main thing at the moment is to get rid of the caretaker government, which has exposed their financial misdeeds, power abuses and incompetence and started dismantling the corruption model imposed by GERB with the behind-the-scenes participation of the MRF. Let us not forget that the protest parties consider as one of their main priorities the removal of the Chief Prosecutor Ivan Geshev whose office is persistently covering up those deeds and whose actions so far unequivocally indicate his connections with Delyan Peevski and the MRF. That is why a government without the participation and support of Democratic Bulgaria, which would stop further corruption investigations, suits them.

GERB leader Boyko Borissov even openly admitted that his deputies could leave the hall at the time of voting the future cabinet, so that it could be approved with far fewer votes, as in this case a simple majority of those present is needed. However, he later changed that position and said that GERB would still be in the hall and would vote against the ITN government. The GERB leader however is known as someone who often changes his mind and his final decision will be opportunistic according to the circumstances at the moment.

If the parties of change refuse en bloc to support the minority government of ITN, it can be elected directly with the votes of GERB and MRF, arguing that the country needs stable governance. This, of course, would be a catastrophic image and moral blow against the ITN, which would expose it in the eyes of voters as partner of the forces of status-quo.

It is no coincidence that BSP was the party that was the first to easily find a common ground and agree on priorities in the negotiations with the ITN. A government with the support of the Socialists and with agreed priorities will clear the image of the BSP leader Korneliya Ninova, whose position has been severely undermined after the two catastrophic election failures. She would hardly want new elections, leading to a third and fatal failure.

Even President Rumen Radev would prefer that the upcoming presidential election in the autumn, in which he will be standing for a second term, be organized by a regular government in order to fend off GERB’s accusations that the caretaker cabinet is acting as his campaign headquarters. If this regular government shuns the widely popular reforms started by the caretaker one, it would only increase Radev’s influence among the electorate.

If, despite this logic, the minority government does not pass parliament, the president would find himself in a difficult position to use his last option by assigning a third exploratory mandate to form a government, after GERB said that due to their apparent isolation they would give up their mandate. Then Radev has the right to choose, but it is difficult to assume that he will ignore the BSP – the third strongest party and the one which nominated him for president. The Socialists decided to bargain to the last moment with ITN in an attempt to sell all their priority demands to the future government. But they also suggested that if they could not reach an agreement with ITN and get a mandate to try to form a government, they will propose the current caretaker government to be voted as a regular one. DB and IBG will almost certainly support such an option, but ITN will find itself in an awkward situation. If it refuses to support this government, designed by the president, Slavi Trifonov’s party will cause a third consecutive election, in which the behavior of the electorate is unpredictable. The question is whether in this way ITN can afford to block the reforms and how their voters will react?

For the reformist forces, this does not seem a bad option, because the changes and dismantling of the Borisov model will continue through the ministers elected by Radev, probably with some small changes in the caretaker cabinet, and this time the voters will probably punish the ITN and strengthen the positions of the real protest parties.

Whatever regular government is formed, it is unlikely to last long in this highly fragmented parliament, because gathering a majority on any serious issue will be a complex task. So political instability in the short and medium term seems inevitable, because the forthcoming reforms involve difficult and painful measures by any government, and they will affect its popularity and cause centrifugal forces and political squabbles among the reformist parties. The positions of critics and opposition forces will be strengthened. Boyko Borissov and GERB are already directing their efforts in trying to capitalize on that.

However, the Bulgarians showed by their two consecutive voting that they prefer the path of gradual reforms to the revolutionary outbursts that took place in the difficult three decades of the transition.