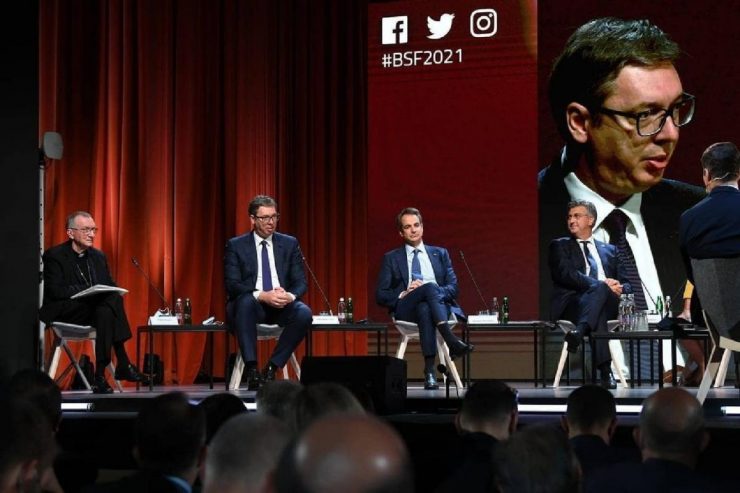 Western Balkans and the EU: no light at the end of the tunnel

“The problem is that 90 percent of the topics in the EU institutions are not dedicated to the strategic goal of enlargement. The topic Is how to expel some members and thus not expand the EU, but reduce it” These are the words of the Prime Minister of Slovenia Janez Jansa, he said during the Bled Strategic Forum, which took place last week in the Slovenian city of the same name. The frankness of the Slovenian Prime Minister and the existing problems in the Western Balkan countries themselves have once again proved that the question of their European integration is currently at a standstill, exit from which is not yet visible.

At the beginning of last week, the 16th Bled Strategic Forum took place in the picturesque Slovenian area on the shores of Lake Bled. In essence, the forum is an international conference organized since 2006 by the Slovenian Government and the MFA together with the Center for European Perspectives. The forum is traditionally attended by leaders of the Balkan countries and EU member states, as well as representatives of the European institutions. Despite a wide range of questions for discussion, such as cooperation in the Adriatic, decarburization of transport, the future of infrastructure competition and interconnections in South-Central Europe, climate change etc., the main topic of the forum is traditionally the future of Europe, in particular, the enlargement of the EU with the Western Balkans countries.

This topic has long been one of the most important and actual for the region. The high-ranking participants of the event have kept repeating and emphasizing the importance of EU enlargement to the Western Balkans.

Thus, Slovenian President Borut Pahor noted that “a change of borders cannot be done in a peaceful way. Only a swift enlargement of the EU with the states of the Western Balkans can strengthen the principle of territorial integrity and security in the region and beyond”.

For his part, President of the European Parliament David Sassoli said that “the postponement of the accession of the countries of the Western Balkans to the EU can give benefit to our opponents”.

Despite the above-mentioned consensus on the need for the integration of the Western Balkans to the EU, none of participants was able to say when it will be materialized in concrete steps by the EU to accept new members from the Western Balkans. On the other hand, the words of the Slovenian Prime Minister Janez Jansa, mentioned at the beginning of the article, became a kind of cold shower for all present and made it clear why Brussels is not very enthusiastic about enlargement to the Balkans.

Janez Jansa’s frankness gave the leaders of the Western Balkan states the opportunity to reiterate their disappointment and criticize the EU for such position. Most criticism has traditionally come from Serbian President Aleksandar Vucic. In particular, he has repeatedly complained that EU leaders have not provided his country with a precise schedule for accession. So, he said that although Belgrade remains committed to the European path, “enthusiasm for joining the EU has diminished in the Western Balkans”. “At one time, Serbia was very enthusiastic about the accession process, but now it is not”, the Serbian president said. Therefore, Vucic said, “they are looking for other ways, mechanisms and means to make progress”.

Such rhetoric by the Serbian president is nothing more than another attempt by Belgrade to take the position of “unjustly offended” and manipulate it in front of Brussels in order to obtain concessions from him. At the same time, the Serbian government rejects even the theoretical possibility of any changes in the questions which are emphasized by EU and for which the EU criticizes it. These are the lack of progress in improving the judicial system, strengthening the rule of law and fighting corruption, ensuring freedom of speech, and conducting fair and transparent elections. In addition, Belgrade has been showing no desire to establish relations with Kosovo, which is another condition for Serbia’s EU accession. In other words, the Serbian president presents the EU with a choice – either you accept us as we are, or we will do without you and develop other areas of cooperation, such as China, Russia or the Open Balkans initiative.

Belgrade believes that such blackmail can put pressure on the EU and force it to turn a blind eye to the above-mentioned problematic questions. However, so far Brussels has not fallen under such blackmail and it is unlikely that it will change its position in the future.

As for “other means to make progress”, the Serbian president was referring primarily to the Open Balkans initiative in which Belgrade plays a leading role. Vucic expressed confidence that the Open Balkans had a future and that no one can stop the peoples who want to cooperate, to establish all those principles on which the EU is based, such as the free movement of goods, services and capital. However, in his candid speech, he decided not to mention other important EU principles, such as the rule of law, the fight against corruption or media freedom, with which, as it was already mentioned, Serbia have significant problems and which are one of the reasons why Belgrade has not opened any new negotiating chapters with the EU this year.

Instead, the Serbian president said he understands the reasons why some oppose the initiative. According to him, after Serbia gained independence in 1878, the great powers tried to keep everything under control in the Balkans, limit Serbia and strengthen everyone else. And now, Vucic believes, some forces are trying to raise other countries and humble Serbia. “They feel that Serbia wants to dominate the Open Balkans project, and this is our attempt for everyone to benefit from accession”, the Serbian president said. By the way, the Belgrade’s dominance in the Open Balkans that was mentioned by Vucic is one of the reasons why other Western Balkan countries are wary of the initiative, as they see it as a means of strengthening Serbia’s influence in the region.

Hungarian Prime Minister Viktor Orban, who has good relations with Alexander Vucic, used the Bled Forum to do him a favor once again and support his position before the EU. In his speech, he stated that “without Serbia’s accession to the EU, it cannot talk about EU security and that European Union needs Serbia more than Serbia needs the Union”. By the way, this is not Orban’s first such favor to his Serbian colleague. In July, Hungarian Prime Minister published his open letter to the European public in several leading political magazines and newspapers of various EU member states, in which, in particular, he stressed the urgent need for Serbia’s integration into the EU. However, given Victor Orban’s lack of sufficient political weight in the EU and, in fact, the controversy of his own figure, there is little chance that Brussels will heed his calls.

North Macedonia’s Prime Minister Zoran Zaev in his turn was less critical of Brussels in his speech. He only reminded of his country’s European aspirations and that it has already done enough to become a member of the EU.

“We have implemented all the reforms envisaged at the stage of accession to the EU, as well as all the criteria established in accordance with the enlargement procedures in Brussels. We have 12 recommendations and a recent recommendation from the European Commission to the European Council that the country can start membership negotiations by holding the first intergovernmental conference… We have overcome the open challenges that opened the door for us to become NATO 30th member… and I hope we will finally start negotiations on the chapters on EU membership”, Zoran Zaev said. Besides, unlike the Serbian president, the Macedonian prime minister did not blackmail and tried not to irritate Brussels with his country’s participation in the Open Balkans initiative. It is clear that Skopje still hopes that the EU will still be able to influence Bulgaria to lift its veto, which blocks the process of North Macedonia’s EU integration.

Bulgarian President Rumen Radev also spoke about the interest in the European integration of the Western Balkans, and especially North Macedonia. However, he stressed that this will be possible for Skopje only if it fulfills its obligations, including: protection of the rights of people with Bulgarian identity, elimination of distorted image of Bulgaria in Macedonian textbooks, monuments, media and termination the hate speech in the country.

Such a statement by the Bulgarian president, as well as the fact that Bulgaria itself has not been able to form a government for six months, suggest that Skopje has little chance of starting such long-awaited accession talks with the EU in the near future.

For his part, the Albanian Prime Minister Edi Rama used the Bled Strategic Forum to support North Macedonia and ask Bulgaria to lift its veto. Addressing the Bulgarian president, he said:

“Bulgarians, please, don’t be such Europeans, be a bit Balkan, open the way”. Interestingly, a month ago, the Albanian prime minister was less diplomatic and said that Bulgaria is learning from “big fish” in the EU and uses local politics to blockade other countries. Edi Rama’s support for Skopje and criticism of Bulgaria is understandable, as Albania and North Macedonia move to the EU in a single “package”, so Tirana’s European integration is also blocked due to a Bulgarian veto.

In general, the Bled Strategic Forum reaffirmed that the process of EU enlargement to the Western Balkans continues to be at a standstill. The strong words that the EU needs enlargement to the Western Balkans were nothing more than an attempt to encourage the candidate countries from the region. More important, however, was the frankness of Slovenian Prime Minister Janez Jansa, which somewhat lifts the veil on the sentiment towards enlargement within the EU itself and gives the Western Balkans little causes for optimism. At the same time, the problems in the Western Balkans that block their European integration are still there. And while Skopje and Tirana still hope that sooner or later the Bulgarian veto will be lifted, Belgrade’s European future largely depends on resolving a simple dilemma: either carry out real reforms in the country and conduct concrete accession negotiations with the EU, or change nothing, blame everyone but themselves and threaten Brussels by seeking “other means to make progress”. So far, it looks like Belgrade has chosen the latter.