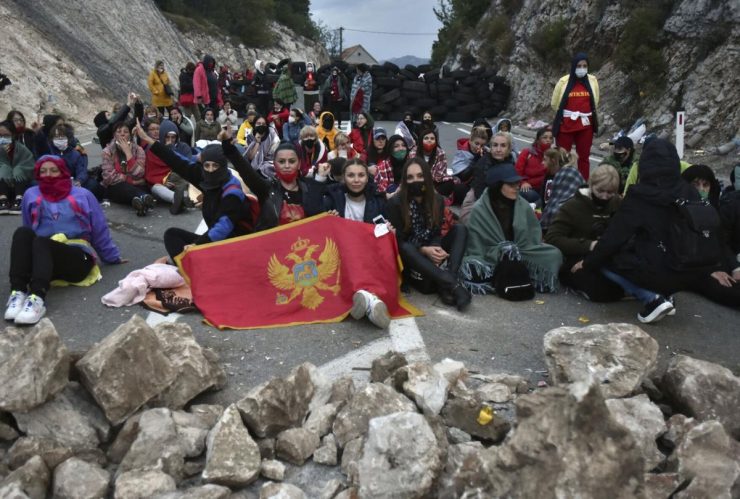 The Church is not out of Politics. The Case of Montenegro

At the end of the last week, Montenegro was on the brink of civil conflict. Tear gas, riots, masked protesters, women on the barricades, dozens of wounded and arrested were the result of what was supposed to be an ordinary religious act – the enthronement of the new metropolitan of the Serbian Orthodox Church. The unrest and the degree of tension in the town of Cetinje, where the enthronement actually took place, once again showed how divided Montenegro remains and how easy it is to shake up the situation using ethno-religious tools.

Everything began with a statement by the Serbian Orthodox Church (SOC) that the newly elected metropolitan of Montenegro and the Littoral, Joanikije, should be enthroned on September 5 at the Cetinje Monastery. The church did not take into account protests against this by local opposition parties and patriotic organizations. Cetinje is the cultural and historical center of Montenegro and a symbol of the spiritual, state and national identity of Montenegrins. At the same time, the city has a monastery, which is the center of the SOC metropolitanate in Montenegro.

The enthronement is a common ceremony, and like any other religious event, has never before caused such tension in Montenegro. However, everything changed after the SOC became one of the main factors in the change of government in the country last August. During 2020, metropolitan Joanikije himself, together with the late metropolitan Amfilochije, led the anti-government religious processions organized by the SOC because of a new Law on Freedom of Religion or Beliefs and Legal Status of Religious Communities. It allowed the state to become the owner of church property, which was taken away from it in 1918, when Montenegro lost its independence. These SOC-organized processions then led to the victory of the opposition in the parliamentary elections and the loss by President Milo Djukanovic and his Democratic Party of Socialists (DPS) of a long-standing monopoly on power in the country.

A few days before the enthronement, the mayor of Cetinje, a member of the DPS, suddenly asked the SOC and Joanikije to hold the ceremony not in the Cetinje monastery, but in the main SOC church in Podgorica. Otherwise, it would be seen as a provocation against the citizens of Cetinje, most of which consider them Montenegrins. Later, the information that on the day of the enthronement, various groups related to the so-called The Komitas Union will come to Cetinje to protest against the enthronement and “occupation by Serbia”, began to appear. The Komitas Union is a right-wing populist, anti-Serbian political party in Montenegro, which was formed after the 2020 parliamentary elections. It particularly fiercely defends the statehood of Montenegro, the Montenegrin language and the church.

Noting the rising of tension, the Interior Minister Sergej Sekulovic said on September 1 that the police could not guarantee the absolute safety of every citizen during the events in Cetinje. He also warned that there are radical sentiments on both sides, and that the riots are planned. However, despite all the warnings and appeals, violence was not avoided.

The enthronement ceremony of metropolitan Joanikije began with the arrival on September 4 of the SOC Patriarch Porfirije in the Montenegrin capital, Podgorica. Also, on September 4, president Milo Djukanovic arrived in Cetinje with his opposition supporters from the DPS to express support for the protesters and once again call on the authorities to cancel the enthronement ceremony. On the same day, protesters began blocking roads with stones, tires, garbage containers and vehicles to prevent official guests of the ceremony from reaching Cetinje. In particular, members of the Komitas Union broke through police borders and blocked entrances to the city from Podgorica and Budva. On the day of the enthronement, on September 5, the tension reached its peak: the clashes broke out in the streets. Protesters broke through the police border in Cetinje and started throwing stones at it, shouting “This is Montenegro” and “This is not Serbia”. Police responded by using tear gas and firing warning shots into the air. Four people were slightly injured in the clashes, and eight protesters were arrested. Among them was former police Chief Veselin Veljovic, who is currently an adviser to President Milo Djukanovic and a DPS member. Given the critical situation Patriarch Porfirije and metropolitan Joanikije had to be taken to Cetinje by army helicopters. The monastery itself was surrounded by soldiers of anti-terrorist units. In such close to combat conditions, Joanikije officially became the head of the Metropolitanate of Montenegro and the Littoral of the SOC.

The reaction of the Montenegrin opposition and the patriotic public to the enthronement of the metropolitan of the SOC in Cetinje was sharp and unequivocal: they considered the ceremony as an insult to Montenegro’s long struggle for sovereignty and independence from Serbia, with which it was united from the end of the First World War until 2006. According to Milo Djukanovic, the protesters defended the country’s national interests from attempts by much larger Serbia to impose its influence through the church. In addition, the Montenegrin president accused his country’s current government of “ruthlessly serving imperial interests of (Serbia) and the Serbian Orthodox Church, which is a striking fist of Serbian nationalism, all against Montenegro”.

For their part, government officials accused the oppositional DPS of attempting a coup, claiming that some of the protesters were armed. Deputy Prime Minister Dritan Abazovic claimed that former government and police officials incited the protests in order to destabilize and even destroy the country. Montenegrin Prime Minister Zdravko Krivokapic on Sunday called the riots in Cetinje an attempted terrorist act by the opposition, warning that an attack on the police was an attack on the state. “It is completely clear that the perpetrators and organizers are the highest leadership of the Democratic Party of Socialists in cooperation with organized criminal groups. The state will stop them”, Krivokapic wrote on Twitter. The response from Belgrade was not long in coming. Serbian President Aleksandar Vucic responded to his Montenegrin counterpart on local television: “Neither you, nor anyone else will be able to conquer Serbia as you did in the previous three decades. You have ruled this country in all possible ways, through crime, police and political officials… As long as I breathe, I will not let you rule Serbia”.

In addition, Vucic added sarcastically that no one in the West will react to the Montenegrin president taking the side of those who tried to prevent the enthronement of metropolitan Joanikije, because, according to him, everything is allowed against the Serbs. “You can imagine what it would be like if I did as he did – I would be hanged in Brussels and Washington at the same moment”, Vucic said. Supporting his president, the speaker of the Serbian Parliament Ivica Dacic expressed his conviction that, thanks to the protests, the Montenegrin opposition simply wanted to stay in power.

However, local political and religious experts point out that there was very little spirituality and too much politics in the enthronement of the new SOC metropolitan in Montenegro. According to them, the religious ritual was only a screen for political games, which was used by politicians, both from one and another opposing camp, in their personal interests. The enthronement in Cetinje became an extremely controversial act, which divided and set both parts of the Montenegrin society – supporters of Montenegrin independence and those who believe that the country should develop in close cooperation with Serbia – in acute conflict with each other. It could have been avoided if the enthronement had taken place not in Cetinje, but in any other church in Montenegro. The decision could easily have been made by either the SOC or the Montenegrin government, which could ban any activities in a city where Serbs are a minority and the SOC is a stranger. However, no one of them, despite the tension around the enthronement and the threat of confrontation in the streets, did not change their decision. That is why there are suspicions that this was done intentionally for a specific purpose. The main beneficiary in this case is official Belgrade, which has a strong influence on the current Montenegrin government and close ties with the SOC. According to some experts, the demonstrative public enthronement of the metropolitan of the SOC in Cetinje is the evidence of Belgrade’s revival of its behavior as a quasi-colonial state in the Western Balkans and a demonstration of its quasi-imperial ambitions. By using the church and interfering with it in Montenegro’s internal affairs, Alexander Vucic wants to drag the neighboring country back to his “Serbian world” from which it broke out in 2006.

Some believe that Belgrade’s motives are much more trivial: by provoking instability in neighboring Montenegro, the Serbian authorities simply want to divert attention from the problems at home. Given that parliamentary and presidential elections are approaching in Serbia, the demonstrative defending the interests of Serbs and the SOC in the neighboring state from attacks by “nationalists and radicals” will not be superfluous for the raise the rating of Alexander Vucic and his Serbian Progressive Party.

However, according to experts, not only Serbia and the pro-Serbian forces of Montenegro had political interests in the story of the enthronement of the metropolitan. Behind Milo Djukanovic and his party’s patriotic and anti-Serbian rhetoric very specific political interests also can be found. Their motivation to take part in the protests is caused, in particular, by the fact that they continue to gradually lose the support of the electorate.

Thus, the game on ethno-religious sentiments of the patriotic part of Montenegrin society is considered by the DPS and Djukanovic as an opportunity to prove its relevance and to preserve the adherence of supporters. In addition, it is possible that Djukanovic’s participation in the events in Cetinje is his desperate attempt to show that he still has power in the country, even if he is a president with limited authority.

In general, whatever the religious or political motives of the opposing parties in both Montenegro and neighboring Serbia are, the events in Cetinje have once again shown how ethnically and religiously divided the Montenegrin society remains and how vulnerable it is to those who want to play on this division. Moreover, after the coup attempt in 2016, this year’s events in Cetinje have once again shown that the situation in this part of the Balkans remains unstable and, together with internal discrepancies and de facto dysfunction of Bosnia and Herzegovina and the unresolved Kosovo issue, poses risks to security of the region and of the NATO’s southern flank.