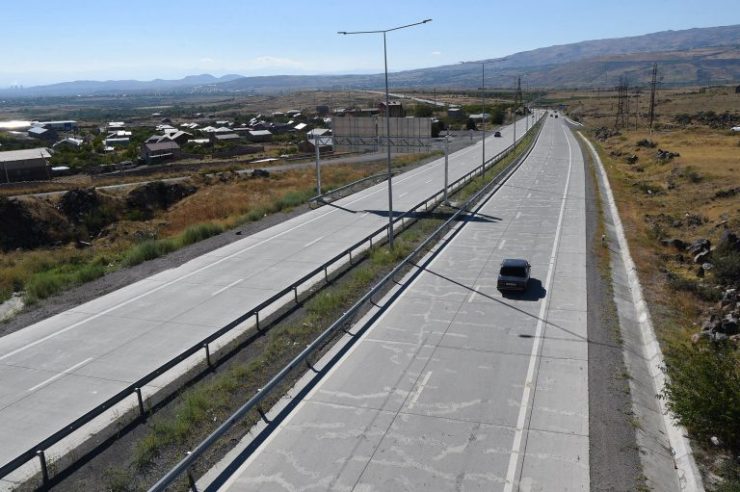 The Second Karabakh War and its aftermath have opened up a new geopolitical landscape and opportunities in the South Caucasus. Some of these opportunities are related to the proposed (re-)launching of regional transport and communication lines. The most discussed of these projects is a road line connecting Azerbaijan with its Nakhchivan exclave and Turkey through the territory of Armenia. Political circles and expert community in Armenia overwhelmingly believe that this project (also known as the Zangazur Corridor) actively pushed by Azerbaijan and Turkey and partially supported by Russia can further weaken Yerevan`s already fragile manoeuvrability and poses a serious threat to the country’s sovereignty. The Armenian leadership now faces a dilemma: to join the East-West projects and enable the implementation of the Zangazur corridor project, or to reject these projects and continue to be landlocked with its western and eastern borders sealed.

As much as it is economically harmful to Armenia to keep its borders closed, their opening also seems quite serious a threat. Negative narratives on the afore-mentioned project not only promote possible loss of sovereignty over Armenia`s southern province, but also pessimistic forecasts that the Turkish and Azerbaijani capital will enter the country and dominate the Armenian economy. Therefore, several forces in Armenia do not seem so much eager to open borders and develop relations with Turkey and Azerbaijan.

The closed border scenario may, however, receive a new opportunity: a large corridor between Bandar Abbas on the Persian Gulf and Georgia’s Black Sea ports. The launching of such a project will not only provide Armenia with an access to seas but also, according to Armenian political expert Benyamin Poghosyan, “will turn Armenia into a transit country for the first time since 1991.”

Although Tehran initiated a regional project on the Persian Gulf-Black Sea international transport and transit corridor in 2016, active consultations intensified in the spring of this year. Iran and Armenia seem especially eager and active in this framework. Armenia`s Foreign Ministry hosted in Yerevan on April 19, 2021 a meeting that followed several rounds of expert consultations in Tehran (2016), Sofia (2017), Tbilisi (2018) and again in Tehran (2019). The project envisages connecting Iranian ports with Georgian ones. In a wider picture, products from China and India can be transported to Iranian ports, and from there by road and rail to Georgia`s Black Sea ports of Poti and Batumi. From there goods can further be shipped to the Bulgarian ports of Burgas and Varna, as well as to Greece. The involved countries, particularly Iran and Armenia do not rule out that the Persian Gulf-Black Sea route may be part of China’s continental Road and Belt initiative.

Nonetheless, the proposed corridor should overcome infrastructure barriers to become operational. As Pogosyan notes, there is no direct railway connection between the southern province of Syunik in Armenia and Iran, while the functional M2 highway is located at a high altitude and is difficult to use in winter. Several parts of this highway between the cities of Goris and Kapan has been under the control of the Azerbaijani Armed Forces since December 2020, as they fall within the internationally recognized borders of Azerbaijan.

In 2012, Yerevan began constructing a new North-South highway to facilitate Armenian-Iranian transit and connect Bavra (near the Georgian border) with Meghri (near the Iranian border), but its construction is to be completed in 2028-2030. Another way to secure connection between Armenia and Iran is to use a highway and railway (Yerevan-Yeraskh-Julfa) via Nakhchivan.

Iran, along with Armenia, has also activated its effortsd in launching the corridor. Iran is especialy concerned about the post-Karabakh war balance of power in the region and the closer military and political cooperation between Turkey and Azerbaijan. Therefore, although Tehran formally recognizes the territorial integrity of Azerbaijan and congratulated Baku on the liberation of the occupied territories, it is more interested in cooperating with Yerevan.

As a traditionally transit country for communications between Azerbaijan and Nakhchivan, Iran sees Baku’s Zangazur corridor plan as a threat. Because the plan may diminish Iran’s leverage in relations with Azerbaijan. At the same time, Ankara’s growing military activity in the region and Azerbaijan’s cooperation with Turkey are sources of concern for Iran. Perhaps some in Tehran also consider the Zangezur Corridor as a bridge connecting Turkey with Central Asia, hence, as a first step towards Turkic unity. These factors push Iran to speed up negotiations with Armenia overthe Persian Gulf-Black Sea corridor. The facts that Nikol Pashinyan chose Iran as his first overseas destination after re-election as Prime Minister, and that one of the Armenian new Foreign Minister Ararat Mirzoyan’s first contacts was with his Georgian counterpart confirm the active phase of negotiations on the project is underway. Yerevan seems to pour its efforts to realize the project as soon as possible, so the recent activization of contacts between Armenian authorities with their Iranian and Georgian counterparts should be surprising.

For Armenia, which has lost the claimed territories since the 2020 Karabakh war, is demoralized and is cornered in the talks on restoring transport lines, the Persian Gulf-Black Sea corridor could be a new breath or new window of opportunities. Left out of energy and transport projects led by Azerbaijan, Georgia and Turkey since the late 1990s, Armenia can turn into a transit country thanks to the proposed corridor. The latter is seen as a real opportunity for Armenia to gain access to world ocean (the Black Sea and the Persian Gulf), to join international transport and communication projects (including the Belt and Road), and to mitigate the country`s heavy dependence on Russian.