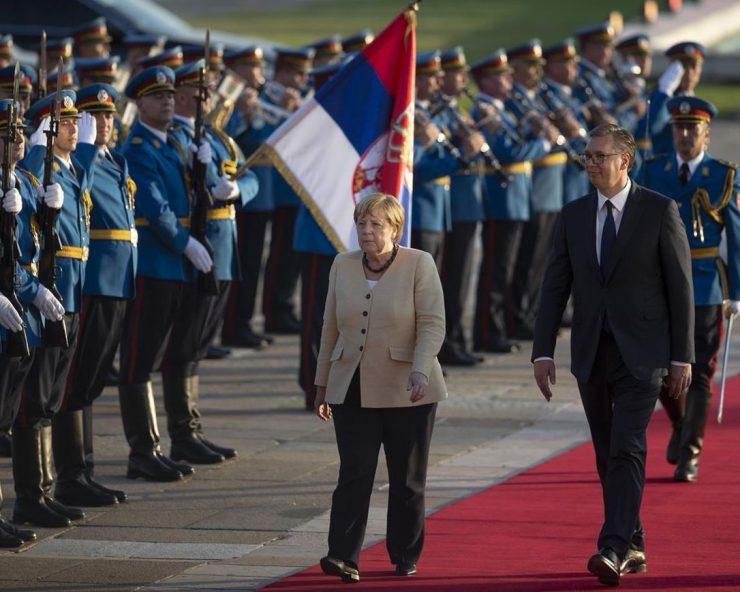 In line with her long-term mission, Angela Merkel used her last chancellor’s visit to the Western Balkans to say that it is in the European Union’s geostrategic interest for six countries in the region to join.

Merkel has undoubtedly been the Union’s most active leader in the Western Balkans for 16 years in power, but at the time she is saying goodbye, the enlargement process is on its breath and it is not known who is more tired of European politics: increasingly frustrated Balkan citizens or most Union leaders plus bureaucrats in Brussels.

With her personal engagement, Merkel managed to put the Western Balkans on the EU agenda, but at the end of a brilliant career, she still cannot boast of significant breakthroughs. While other players such as Russia, China, Turkey or the United States are at the gates of the region, Merkel used her visits to Belgrade and Tirana to reaffirm unequivocal support for the European perspective of the Western Balkans and send a message to Brussels and the future German government. Also she tried to save the Berlin Process – the initiative she personally launched seven years ago.

The Berlin process is designed for better coordination of the EU’s policy towards the Western Balkans and intensification of the integration process by bringing the region together around the economy, transport and energy. But, unfortunately, due to vetoes and blockades from Brussels, the process has stalled for years. The balance of the Berlin Process is meager. At the virtual summit of the leaders of the Western Balkans in July, Merkel confirmed that there are still many problems. So she did in Belgrade and Tirana.

People in the region have not received any signal that things will develop practically in terms of EU integration, whose reputation was undoubtedly damaged when the Union did not help the Western Balkans significantly in the fight against the pandemic. There is a fear that with Merkel’s departure, the energy with which Germany and the Chancellor personally advocated for the Western Balkan countries in previous years – with varying degrees of success – will disappear. Merkel bequeaths the leaders of the region to preserve the most important legacy of her Balkan policy, which is facing obstructions from various addresses.

This is especially true of the Open Balkans initiative, which is supported by Serbia, Albania and Northern Macedonia, and which is rejected by Bosnia and Herzegovina, Montenegro and Kosovo. Merkel fears that secondary regional initiatives could jeopardize the Berlin Process, and she openly told Serbian President Aleksandar Vucic in Belgrade that she sees perspectives only in the unity of all six countries on the membership list.

Four agreements on the Regional Economic Area were supposed to be signed in July, but that did not happen. Even then, the Chancellor announced that she expected this to happen by October 6, by the EU-Western Balkans Summit in Slovenia. So her visit was primarily related to sending the message that the process must be completed and that these agreements should be signed.

Merkel chose to travel to Belgrade, where rules the politician with whom she has established relatively close personal contacts. President Vucic is her natural conservative partner who provided investments to Germany, cooperated on migrants and on the Kosovo issue and she had to know that with all his marketing skills, he would use her visit in his presidential elections campaign, which is about to be held in the spring of 2022.

The Serbian pro-European opposition criticizes Merkel, claiming that she “kept Vucic in power”, and one of the leaders also reminds that the chancellor as a legacy left the promoters of illiberal democracy from Hungary and Poland through Slovenia to Serbia.

The critics do not stop repeating that Merkel knew how to close her eyes – all for the sake of dialogue between Belgrade and Pristina. Such an approach, however, did not lead to the expected results: key reforms in Serbia were not implemented, the country moved away from democracy and at the same time did not come closer to ending Kosovo crisis. Merkel said in Belgrade that the Kosovo issue must be resolved at the end of the accession process. Vucic pointed out that it was clear to him, but the fact is that both Belgrade and Pristina have plenty of time but little desire and interest in resolving the conflict any time soon, which itself has a latent threat of destabilizing the Balkans.

Merkel chose Tirana as her second stop. The Prime Minister Edi Rama is a socialist, whose political views are not shared by Frau Angela, but he is credited with supporting the Berlin Process.

Guided by the pragmatic caution, which is woven into her politics of compromise, Merkel bypassed Sarajevo. Bosnia and Herzegovina is far from any concrete accession perspective, and Merkel, even with her authority, has failed to prevent national issues from blocking the implementation of basic life policies. She has recently sent a new High Representative to Sarajevo in charge of implementing her political will, which did not really help to make Bosnia and Herzegovina a functional state, nor sanctioned Milorad Dodik’s separatism. What about the Bosnia’s electoral law?

Merkel also avoided going to Skopje, which was undeservedly pushed to the back of European integration. What about the EU’s initiative against Bulgaria’s policy of “interfering maneuvers” to force North Macedonia to recognize Bulgaria’s roots? At the end of her political journey, she would have to hear again how Prime Minister Zoran Zaev is saying that this is

“a huge failure of the EU and a bad message for the entire region”.

Another question is Merkel’s attitude towards the events in Montenegro – the hot potato of the Balkans these days. Despite her traditional aversion to Milo Djukanovic, she didn’t demonstrate the unequivocally strong support for Prime Minister Zdravko Krivokapic, who is under constant pressure from pro-Serbian forces operating from Belgrade.

While constantly supporting the Kosovo’s independence, she did not include Pristina in the itinerary. This may have happened because Berlin is distancing itself from the government of Albin Kurti. But what has she done to keep Kosovo visa liberalization from being postponed all the time?

For all those “bypassed”, a consolation lunch in Tirana was organized. During that event there was a lot of toasting for Merkel’s efforts to keep the Western Balkans a priority of German foreign policy and to prevent further growth of skepticism in the region towards the EU enlargement strategy, as well as to the so obvious lack of interest of the Union’s significant part to expansion to the Western Balkans.

What will happen from all that is uncertain. It depends on the composition of the new German government, which might not give up the region but could change its priorities on such directions, as the speed of resolving the identity crisis within the European Union, the future of transatlantic cooperation and the relations with Russia and China.

The key contribution, due to which the region must be grateful to Merkel, is that she put the Western Balkans on the Brussels agenda. The fact that the region is far from membership is a complex mix. Guided by the idea of stabilocracy and the ideology of the right, she was ready to look favorably on the growth of authoritarianism and the restriction of media freedoms and at the same time tried (in accordance with German political and economic interests) to be an honest broker of regional conflicts, from Kosovo to Bosnia.

The results are modest and the region is in worse shape than it was in 2005, but it is mostly due to the resistance of many leaders of the region to truly reform their countries in line with the values of liberal democracy. One era is coming to an end. If Angela Merkel had realized all her visions, the Western Balkans would have been a better place to live.