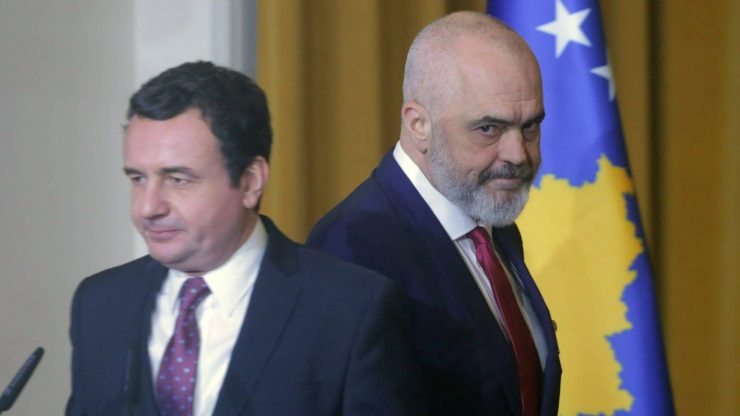 Albania and Kosovo to unite: what are the chances?

Kosovo’ leadership in the midst of escalation with Serbia continues to promote the thesis that they will consider the possibility of institutional decisions or a referendum on the unification of Kosovo and Albania.

Prime Minister Albin Kurti in an interview with Al-Jazeera spoke about the possibility of holding a referendum on the unification of Kosovo and Albania.

“We declared independence in order to distance ourselves from Serbia and not from Albania,” Kurti said.

He emphesised that the future referendum will be held in a peaceful democratic way and will become an expression of freedom for Kosovo. Not that a referendum looks likely anytime soon: it would require a change in Kosovo’s constitution which currently does not allow for the country to be joined to another.

Kurti also noted that Kosovo and Albania are complementary and if it comes to unification, it will benefit people on both sides of the border.

However, this is not a new idea. Such statement is not the first time the politician has hinted at unification. Previously former Albanian Vice Prime Minister proposed a plan for creating the office of Joint President of Albania and Kosovo, maintaining that “the time has come for our one nation, artificially divided in two countries, to have a single president”. This caused great concern at the NATO headquarters in Brussels, igniting a debate on whether that would mean that Kosovo would be protected by Article 5 of the Washington Treaty, exposing the Alliance to another intervention in the region.

Now the ideologues of the creation of “Great Albania”, born in the 19th century among Albanian intellectuals and taken into service during the Second World War by Albanian collaborators, are arising again. These ideas are actively supported by the Albanian prince Leka, who offers himself as the monarch of a united Albania. Thus, he said: “The unification of Albania and Kosovo, two states with one nation, must be achieved by the return of the monarchy”. The goal of national unification is widely discussed and has strong support among the people living in Albania and Kosovo who see themselves as part of a single Albanian nation. One poll from 2019 found 64% of Albanians in Kosovo and 75% of Albanians in Albania would vote in favour of national unification in any referendum on the matter.

These discussions would create problems with international acts that ensure Kosovo’s stability,  referring to acts that guarantee the presence of NATO in Kosovo and the Ahtisaari Package. Moreover, even more importantly, a prime minister cannot insinuate for a different status, because Kosovo is still in the process of being recognised by other states.

Meanwhile, Albania has been focused overwhelmingly on trying to join the EU, which does not accept the idea of Albanian national unification, meaning Tirana has not pushed the issue. Instead, it has pursued the idea of Albanian unification within an internally borderless EU, which is a safer and less complicated option, on the assumption both Albania and Kosovo eventually join the union.

In this context, speculation by political leaders about the unification of Albania and Kosovo until now has tended to be contingent: “if we can’t unite within the EU, we will have to unite outside of it”. Even former Prime Minister Haradinaj’s in his statement made clear his preference for a “Euro-Atlantic Kosovo, a part of the EU and NATO” and that a referendum would follow if this failed to happen.

However, these factors no longer apply. Kosovo cannot gain recognition from Serbia, foreclosing the option of independence, and Albania’s plan of joining the EU is practically stalled.

So, does this mean next stop Greater Albania? Not quite, because there is an obstacle in the way, namely Serbia, which opposes Kosovo’s unification with Albania as much as it opposes Kosovo’s independence.

As has been the case for the past three decades, when the future of the Balkans is debated, the question of a “Greater Albania” surfaces, as it is now, only to fade and resurface.

As long as the EU exists and assuming that it will follow through with its regional enlargement plans in the Balkans, a “Greater Albania” is not in the best interest of Albanians. It is not uniting that pays off in terms of bargaining leverage and institutional representation. Moreover, now it’s nothing more than fiction, which is actively used by politicians as an opposite idea to the euro integration.