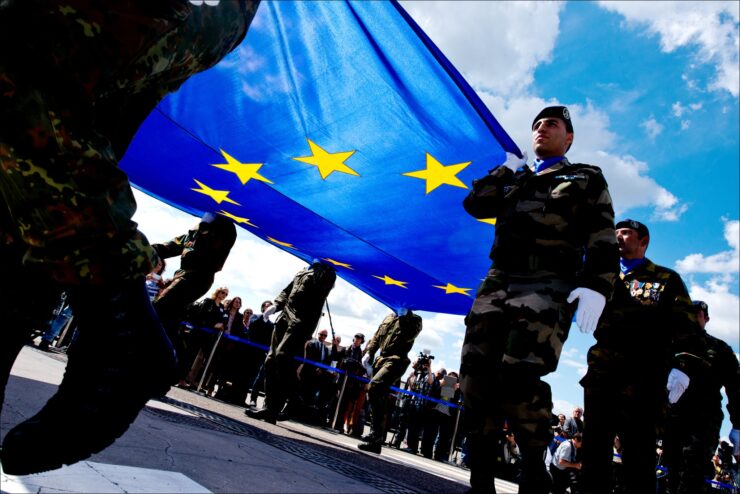 At the beginning of October, the agenda of the European Union included the discussion of question of its strategic autonomy. This is a question that is a priority for some of its members and is of concern to others. The desire to gain strategic autonomy and thus get rid of the “custody” of Washington has existed in some European capitals for a long time, but so far, such a desire ended only with talks and attempts to develop at least some common vision on this controversial question. Most likely it will remain so in the future. On the question of strategic autonomy of the European Union, The New Geopolitics Research Network spoke with former Bulgarian Defense Minister Velizar Shalamanov, who, in addition to not being optimistic about the EU’s attempts to become independent in defense, considers them dangerous and harmful to both the EU and NATO.

Fedyk: The strategic autonomy of the European Union has been discussed for quite a long period. Recently this question again was in the center of EU’s attention. What is the current situation with it?

Shalamanov: Currently the EU is reviewing its security and defense and the final document – the Strategic Compass – will be adopted during the French presidency. At the same time, consultations are taking place on NATO’s next Strategic Concept and on issues related to technology, Russia’s aggressive actions, climate change, China’s rise, arms control and terrorism. Also, the signing of the AUKUS agreement shows that the United States and the United Kingdom (which is no longer part of the EU) are deepening their commitments in the Indo-Pacific region, and the EU “global role” intentions also include action outside Europe.

In addition, in the EU’s leading countries – France and Germany – a change of state leadership will take place. In such circumstances, a number of important questions arise regarding the EU’s foreign and security policy. The main one – and no matter how much it is avoided within the EU – is the relations with Russia. What to do with its actions in Moldova, Georgia and Ukraine, new tensions because of Belarus with the Baltic states and Poland, as well as in the Black Sea region in general? What about Russia’s actions in Syria and the Middle East, gas supplies, cyber security and hybrid threats, human rights in Russia itself? The EU’s relations with Turkey will also be difficult. Will its efforts of gaining strategic autonomy be based on these questions? Will there be a security policy in the EU in the Indo-Pacific region, in Africa, in the Middle East, and will it be different from those of the US and the UK? Will relations with Russia and Turkey differ from those of NATO (where Turkey is a respected member and Russia is considered an immediate security threat)? Therefore, there are many difficult questions, without answering to which, the progress, except for words and documents, as well as wasted money, cannot be expected.

Fedyk: Despite frequent talk about strategic autonomy, no concrete steps have been taken in this direction so far. Why it is so?

Shalamanov: The European Union, which is primarily an economic union, is currently developing more and more politically. It has not been seriously engaged in defense so far, but now it cannot avoid including this question in its agenda. In addition, defense is the core of NATO’s mandate, and most EU countries are members of the Alliance. However, much of NATO’s capabilities outside its command structure belong to non-EU countries, i.e. EU protection depends on NATO and non-EU countries. This is not a very good situation. Therefore, before talking about strategic autonomy, EU member states must first strengthen defense and resilience within NATO and create a long-discussed European pillar there. And only then will it be possible to start some talks about the strategic autonomy of this pillar in NATO. In other words, the question of EU strategic autonomy is not of a real priority. Instead, there are more important issues that need to be addressed first.

Fedyk: Given the abovementioned, what should happen for the question of European strategic autonomy to finally start moving from constant talks to practical implementation?

Shalamanov: First of all, European Union needs to have strong political leadership, strategic vision, appropriate funding, competent and experienced military leadership, a multinational force with a full range of capabilities and a high level of cooperation. In addition, the EU must be a strong political union, politically and economically independent of Russia and China, such as the United States. In fact, European defense will be possible only when EU member states have a common vision and attitude towards threats in this area, are ready to act together, and their military are ready to protect freedom and other values ​​and achievements of the EU, as well as to die for them. The EU will have a capable army only when there’s a readiness at the political level and in the public consciousness to fight for its freedom without relying on the United States. So far it works in NATO, but it still doesn’t work in the EU.

Fedyk: Isn’t the EU’s desire to gain strategic autonomy an attempt to get free from the US “custody” in order to form its own foreign and security policy, in particular, to return to business as usual with Russia?

Shalamanov: Undoubtedly, Russia’s goal is to free the EU from US control, weaken NATO, and then weaken the EU by creating an East-West and North-South division. Russia sees its security and economic interest in a weak and fragmented Europe without a US presence. So, it is clear that the EU’s strategic autonomy without increasing its defense capabilities and readiness to use its defense capabilities is in Russia’s interests and poses a high risk to the EU, especially in Eastern Europe. Therefore, the EU first needs to gain serious defense capabilities in NATO, and then – start talking about it strategic autonomy. Let there first be a strong integration of armies within the EU, a strong European defense industry with zero dependence on Russia and zero tolerance for Russian hybrid attacks, and then there could be talks about strategic autonomy. We have a lot of work to do.

The EU cannot return to “business as usual” with Russia, because Russia will not stop blackmailing European countries and provoking them with its aggressive actions. This will create problems for at least some of the allies and will cause problems in the EU itself, which in turn will block normal relations with Russia. Also, the more Europe depends on Russia, the greater the risk of crises of various origins. The countries of Eastern Europe, in particular, Ukraine, Georgia, and Moldova, will suffer the most from this. This makes these countries a natural ally of the United States and makes it more involved in these countries, albeit with less force now due to the shift of their focus to the Pacific.

In short, NATO, thanks to Eastern Europe (Poland, the Baltic States and Romania) and the United States, will not naturally allow the EU to fail in its relations with Russia.

Fedyk: In which defense issues the EU could be autonomous from NATO, and in which – couldn’t?

Shalamanov: In questions not related to classic defense, that is, outside of Article 5 of the NATO Charter, the EU has the potential to do more. In questions related to Article 5, if the EU wants to do something outside NATO, it is, firstly, a violation of the Washington Treaty. If the EU wants to conduct the Article 5 related operations without the United States – let there be autonomy, but I hope that it will not be against the interests of the United States and the United States, in turn, will not act outside NATO against the interests of the EU. In fact, all this is written in the text of the Washington Treaty.

In short, the EU cannot duplicate NATO outside NATO. It simply does not have the necessary resources, especially “invisible” ones – a common vision, purpose, motivation. Can it gain them? – Maybe, but it won’t be anytime soon. That is, there is currently no need to allocate meager resources to autonomous, that is, parallel to NATO defense capabilities. The European countries can now do this only if they do not rely on NATO’s Article 5 for their own defense, or if they have a desire to solve problems by military means outside Article 5 without the involvement of the United States, which is against the interests of the United States, because it is still a global power and has interests throughout the world. Such EU action would destroy Article 5 and NATO, which, in turn, would mean the end of Europe’s defense that has guaranteed peace for 77 years. I am not sure that anyone in the EU wants this to happen now, which means that there can be a lot of talk about strategic autonomy in the future, but there are unlikely to be any serious steps. However, such talks hurt both NATO and the EU, making them vulnerable to Russia and China.

Fedyk: What main conclusions can you make as an expert in the field of security and defense regarding the question of EU strategic autonomy?

Shalamanov: In principle, increasing the EU’s defense ambitions is a positive step. At this stage, in my opinion, this should also happen in NATO, where European allies lag behind the United States and Canada, especially in Eastern Europe and have (especially in Bulgaria) a serious dependence on the defense industry of Russia and Belarus. This dependence must be overcome immediately, and new ones must not be created. Cooperation in other areas, including energy and space, is important, but Europe’s defense must be 100% independent of Russia and China.

I do not imagine a more reliable defense formula for EU countries than the one related to Article 5 of the Washington Treaty, and there are currently no indications that the United States and Canada, Britain, Norway, Turkey, Northern Macedonia or Montenegro want to withdraw from NATO. On the contrary, it seems logical to me that Finland and Sweden, as well as Austria and Ireland, should join NATO and that the Alliance should also expand to Ukraine and even Georgia.

In short, NATO Article 5 and the open door policy guarantee the protection of Europe. For operations outside Europe, the EU can develop capabilities (as part of NATO), but again, a natural ally in such operations is NATO countries as well as NATO’s strategic partners. Of course, if the EU does not decide to play with authoritarian regimes without consulting NATO. But this is not a good idea.

I see the EU autonomy only in competition with the United States in the interests of greater defense capabilities and a stronger Atlantic Alliance to protect free democratic institutions and our citizens from various threats that we cannot even fully foresee. Some of these threats are our weaknesses and dependencies, which we reduce by consulting with each other and expanding the area of ​​freedom and democracy.

Long and fruitless talks on the EU’s strategic autonomy could prove to be our serious weakness. And we must not allow it in any case.