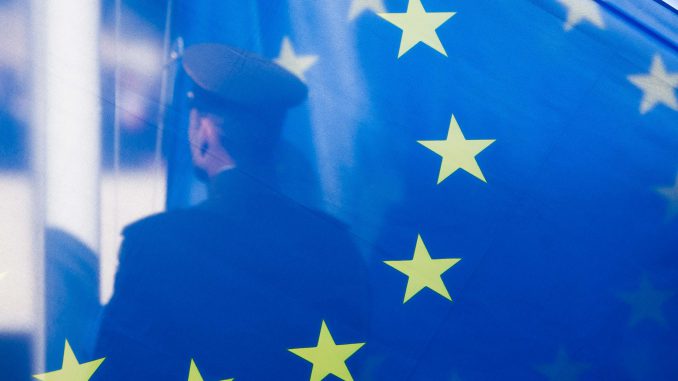 Main points of his speech:

Do we still really have Eastern Partnership? (Not formally but as a framework with clear goals?)

Should we perceive The Association Trio (Georgia, Moldova, Ukraine) as a development or ruin of the Eastern Partnership?

Ukraine’s partnership with the EU in the security sphere today is not systematic enough, focusing mainly on civilian security aspects, and is rather limited in the defence sector.

Ukraine-EU security partnership should be based on:

Interests: EU is focusing mostly on the civilian security and soft areas; Ukraine is trying to get support in the building defence forces (classical military forces – land, navy, air force). Ukraine is looking for practical cooperation in defence industry sphere; EU (Germany and France especially) is not ready for concrete steps in defence industry cooperation avoiding provocation of further crisis in relations with Russia.

Values: Ukrainians are on the war now and they are ready to fight against Russian aggression not only because of protecting of own territory but basic democratic values. Some decisions and steps by EU countries (Northern Stream II is the most fresh example) which are defined as Realpolitik or just explained by commercial interests – perceived in Ukraine as a betrayal of European values.

Readiness of Ukraine to be a security contributor to EU: Ukraine is obviously is ready. But EU (because of the difference in threat perceiving and motivations regarding Russia) is reluctant to absorb Ukrainian intentions.

Concrete spheres for potential practical partnership between Ukraine and EU:

• protection of the EU’s eastern flank from Russia’s aggressive actions;

• practical experience in countering Russian aggression in the training of EU forces;

• provision of forces and means for EU peacekeeping operations and missions;

Sure and obvious: Ukraine has to do a lot in internal reforms and fighting corruption.

Thus, cooperation with EU is one of the most effective instrument for providing reforms in Ukraine security sector.

But it`s not enough now for effective development of Eastern Partnership and other EU project in security sphere.

EU strategic leadership and pro-active responsibility for developments in Eastern Partnership security space could be a new impulse not only for this project but for more stable region.

Potential positive example: due to the media report EU is considering on the EU Military Advisory and Training Mission Ukraine (EUATM).

That could be real step ahead not only in security cooperation between EU and Ukraine but with all Eastern partnership countries as it`s possible to create on the basis of this advisory and training mission a special framework or hub for exchanging of the experience between EU countries and EaP members in the hybrid warfare, disinformation, national resilience, cyber security and other security issues as counter-terrorism activities, migration problems, police rescue operations and others.

So my recommendation how to boost EaP in security domain – start to make small but concrete and very practical steps with countries that are ready for it – obviously its Association Trio. EU Military Advisory and Training Mission Ukraine (EUATM) could be a hardcore of this new impulse. Sure we need to attract other countries of EaP – but with an individual approach (Azerbaijan, Armenia, Belarus).