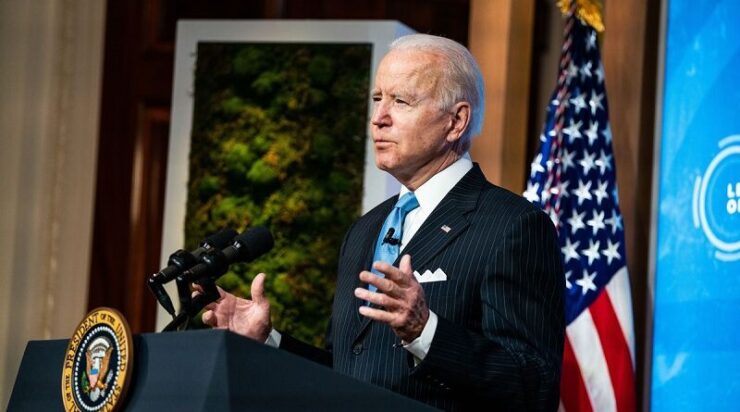 Russia is waging a gas war on the EU. But Europe’s friend the United States is nowhere to be seen. That’s disappointing – and dangerous.

Things don’t seem to be going according to plan for US President Joe Biden. His administration came to power prioritising climate policies and sanctions over increasing US gas production and exports. In fact, Mr Biden appears to be delivering neither on climate nor on sanctions.

US climate pivots haven’t hastened transition to RES or reduced CO2 emissions, which in 2021 are expected to rebound by more than 200 Mt CO2 to 2020 levels and to stand at 4.46 Gt CO2! As to US sanctions, these have failed to halt the Nord Stream-2 (NS-2) pipeline, not to mention its Turk Stream twin. The bottom line is that the policies and measures proclaimed have been more in the realm of good intentions and goodwill than that of effective action. That was no surprise, as the White House gave up on directly sanctioning Geman individuals and companies.

However, at least Mr Biden is keeping his word in one respect: he’s doing nothing to boost US gas output or exports (at least, not those to Europe). Result: gas prices are sky-high. Which, combined with a lack of sanctions, means that the US is conspicuously absent from the battlefield as Russia unleashes its lethal gas weapon on the United States’ EU allies. True, at this stage, sanctions seem hopelessly late and inadequate.

For Russian president Vladimir Putin, by contrast, things are going just fine. He’s thriving on a mighty cash boost from a surge in revenues for Gazprom. Before end-2021 these will be over $20 billion more than expected, allowing him to claim that he has already recovered the investment in Nord Stream-2. And, whatever financial damage Gazprom has suffered, its CEO Alexei Miller is undoubtedly having a good laugh at the EU’s energy policy, which allows the Kremlin to get its kicks by weaponising its gas stocks.

For the West consistently fails to grasp a simple truth. The only thing Russia has going for it, as it strives to substantiate its global status and maintain its income base. is its talent for probing vulnerabilities in NATO’s and the EU’s energy shield. And it does this brilliantly. As a result, it punches way above its weight in the world, enjoying a negative power quite out of proportion to its GDP, energy and military resources – a power capable of translating dependence into subservience.

The outgoing German government and Chancellor Angela Merkel have been a critical factor in the EU’s self-destructive energy policies. They undermined the Union’s resilience to exogenous shocks, opening its gates to the Kremlin’s Trojan horse – for NS-2, now ready to go but for EU permissions, can hardly be called anything else. Today, Germany and Austria have wilfully inadequate levels of gas in their underground storage facilities. And unless additional Gazprom gas flows via NS-2, they might not have enough in store to balance peak demand during a harsh winter. This will be a classic blackmail scenario, involving a choice between freezing over the winter and releasing NS-2’s total capacity. So guess which Germany and Austria will choose? That’s right: they will play ball as planned and resort to an emergency ruling presenting NS-2 as a fait accompli.

In this gas war, the US has had the same two options it had when Hitler attacked his neighbours in the late 1930s: engage or appease. It played “engage” at first: US sanctions on NS-2 did in fact delay the project appreciably. But when push came to shove, Washington chose to play ‘appease’ (strategic appeasement, of course!) and not to risk a deterioration of relations with Germany. In other words, Mr Putin’s trap worked: Mr Biden blinked first.

That wasn’t inevitable. There was a second, more solid option: to engage and to call Mr Putin’s bluff by providing sufficient American shale gas on the European market, thus defusing Gazprom’s scary gas weapon. After all, the US is the largest gas producer in the world, with its 962 bcm per annum, fully capable of exporting more and acting as a swing producer.

At first glance, all the right market signals were in place. EU gas prices had gone through the roof. If the market had been working normally, soaring prices would have generated interest among US drilling companies and gas exporters. Not this time, however. That just wouldn’t have been possible without a push from the US government and the US Congress. Both should have stepped in to encourage and facilitate natural gas exports to NATO partners. Instead, they chose benign neglect. And, to add insult to injury, American LNG exporters are currently contemplating strategic gas deals with China, further rerouting critically important US gas volumes away from the European market.

(Incidentally, it is worth ruling out an argument used on October 25 to journalist by Amos Hochstein, Mr Biden’s energy adviser. The US administration, he said, is not able to tell US gas exporters whether to export their gas to Europe. That may be literally true, but it’s not very relevant. It can actually do all sorts of things to encourage such exports. And it can stop gas going to China, where most most of it continues to end up, with strategic gas deals to come. In each case the US State Department must clear such deals, which it seems to be doing with some alacrity at present. And while we’re on the subject, a little more consistency and plausibility in Mr Hochstein’s pronouncements might be a good idea: in the very same briefing he said that Russia should export more to Europe. So he can’t tell US companies what to do, but is able to tell Gazprom and other Russian companies? Please, Mr Hochstein! No wonder the Kremlin uses such inconsistencies to send a simple – and not implausible – message to EU and NATO members: when it comes to gas and energy, you should talk to us, not the US! However, we digress….)

So, while Gazprom is proceeding with its killer endgame, which ties more gas to NS-2 regulatory clearance, Washington’s strategic gas interplay with China is ignoring NATO allies just when times are most critical for their national security. So, to extend the World War II metaphor, EU member states can hardly hope for a “new Marshall Plan” now. And this despite the fact that trans-Atlantic help would, this time, be financially profitable for the US, yielding the benefit that dozens of billions of euros would reach American producers instead of swelling Gazprom’s coffers and Russia’s military budget – and shoring up the already strong position of Vladimir Putin.

What Is To Be Done?

So, as another Vladimir once said: “Chto dyelat’?” (“what is to be done?”) Well, there are no quick fixes or remedies with instant effect that can undo the damage already inflicted.

Additional natural gas supplies from the Southern Gas Corridor are an option, including Azerbaidjan, but will take time. Similarly, more gas could reach Europe from Turkmenistan, the Eastern Mediterranean, the Black Sea, and the global LNG market. Of all these, LNG and Azeri gas would be the nearest thing to instant relief to balance off Russia’s bullying. Still, even this would take time, as the volumes necessary would need free access to the national gas transit grids of Greece, Turkey, Bulgaria and Romania, currently dominated by long-term contracts (LTCs) with Gazprom, before they reach Ukraine or Slovakia.

The Three Seas Initiative (3SI) is promising, in that it should encourage regional interconnectivity and offer alternative routes and transmission capacities to non-Russian gas suppliers. But 3SI is very much in its infancy and therefore won’t produce tangible results for some time.  Meanwhile, the region’s TSOs are locked in exclusive arrangements with Gazprom subsidiary Gazexport, while US LNG exporters remain reluctant to engage beyond deliveries to an LNG terminal.

Some significant Western international energy players, in terms of capacity and clout, could integrate regional demand and supply and counterbalance Gazprom, if they wanted to. But they lack both the will and motivation to do so, in many cases because they want to keep on the right side of Gazprom – and see little incentive to keep on the right side of anyone else. No, the real battle for control of the gas supply is being waged in the various national gas markets of Central and Eastern Europe (CEE) and Southeastern Europe (SEE). And it’s a pretty uneven battle, because Gazprom contracts and corrupt practices have left a legacy of captured political and business elites.

As to US-EU relations, it’s hard to say whether things are better or worse – and distance smaller or greater – now than they were during the presidency of Donald Trump. On Mr Trump’s watch, differences came out into the open on both sides of the Atlantic. But at least US LNG was starting to shift the balance in both global and EU markets – and kept Putin’s gas ambitions at bay. Now, under the Biden administration, bon ton prevails in trans-Atlantic relations. But it does so at the expense of substance. And when Vladimir Putin fires his gas weapon, Washington goes mute. It is commendable that US Defense Secretary Lloyd Austin has been in the region, expressing support for countries subject to Russian aggression. However, those countries’ vulnerability to manipulation and blackmail by Russia’s energy weapons has peaked, a situation surely calling for political and energy solidarity – and above all for more US LNG or alternative, non-Russian gas supplies. But nothing so tangible seems to be forthcoming.

As a result, Mr Putin’s golden moment may be at hand.

He must think – and he is not obviously wrong – that all he has to do now is exploit his Turk Stream and Nord Stream advantages for all they are worth, beef up the psychological warfare, profit from worst-case scenarios linked to real or perceived gas shortages and thus force Europeans into succumbing to his geopolitical demands. It’s a crucial moment. The renewal of long-term gas purchase contracts on Gazprom’s terms is topping his agenda. After all, the critical geopolitical drive for his Ukrainian bypass strategy was to free his military options in frozen conflict zones and force CEE countries into the earliest possible LTCs with Gazprom.

It seems to be working. Serbia and Bulgaria are already knocking on his door, eager to start negotiations. Moldova is threatened with a gas supply cut off from December 1 onwards. It’s a classic form of gas bullying, in which debts for gas used in frozen conflict zones under Russian control are passed on to the central governments in Kyiv or Chisinau. Mr Putin knows exactly what he’s doing. But he’s also acutely aware that time is of the essence. His performance at the Valdai Club conference on October 21 is a testament to his understanding of a window of opportunity closing on November 1, a date by which he will have his domestic underground gas storage facilities fully replenished. After that, exports will have to increase – either by offering more on the Electronic Sales Platform (ESP) in St. Petersburg, replenishing Gazprom’s stored gas in German UGS or by direct sales via LTCs, securing Gazprom’s dominant market share on the EU gas market.

So, at this crucial juncture, suppose the US stays out of the gas war in Europe. What happens then? The answer is simple – and catastrophic. NATO and the EU will persist blithely with their Green Deals, undermining their energy security, with massive long-term consequences for geopolitical balances in Europe. And, malign genius though he is, Vladimir Putin will not be to blame. It will be the Europeans themselves. And their absent friends the Americans.