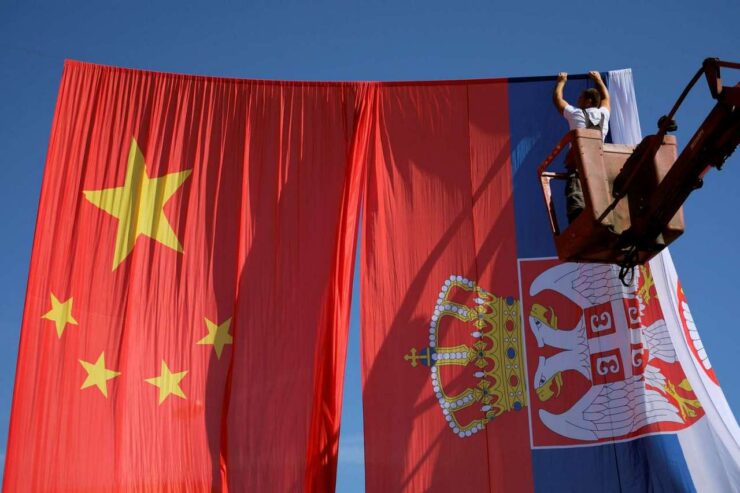 Serbia is under the pressure of Chinese investments

In our days China is posed as the second largest economy and one of the leading investors and importrant center of technologies. At the same time, its totalitarian political system and specific approaches in promotion its interests in the world are under growing concern to the democratic world.

The United States, NATO, and Europe increasingly see China as a challenge to be responded. And this position of the West is already reflected in the relevant strategies. On the other hand China often plays on existing contradictions by offering itself as an alternative.

The Western Balkans countries are not exception of this process, being in the slow process of European Union membership for the second decade. Today, in 2021, the finish of this process is also not visible.

That is why China remains one of the main economic partners of the Western Balkans. Therefore, it is obvious that the issue of the Chinese presence became one of the key points during the Belgrade Security Forum in late October this year. Two panels were devoted to this topic.

Most experts agreed that Serbia can be considered as the main Chinese partner on the Balkans. Vuk Vuksanovic from Belgrade Center for Security Policy is convinced that the main reasons for that are Serbian geographical location, status of EU candidate and economy. Serbia remains the largest economy in the region, showing steady growth. We can say that China evaluates Serbia as a kind of “window” to the Balkans and to the whole of Europe.

It was noted during the Conference that the development of the Open Balkans initiative is in China’s interests in the region. Today, Serbia plays a leading role in this initiative.

Close partnership between Serbia and Hungary is also in China’s interest. Serbian President Vučić is happy to take part in new political initiatives of his colleague Orban. These initiatives, to which Slovenia also has joined, should demonstrate a “different” position in Europe. Hungary is also a close partner of China and a leader of Beijing interests in the EU. A good example of the common interests of Serbia, Hungary and China is the Beijing-funded high-speed railway project from Belgrade to Budapest.

Vuk Vuksanović noted that a turn of Belgrade towards China started after 2008. It was caused by the self-determination of Kosovo and the global financial crisis. After that Serbian leaders realized that quick EU membership would be unreal. So betting on China has become an easy way for diversification of partnership and hedging of risks.

China able to finance big and expensive infrastructure projects on the Balkans and this gives a big advantage to Beijing. Local governments often cannot afford this and the EU doesn`t hurry to invest to the infrastructure of the region. On the other hand China is interested in developing transport routes to Western Europe from the Eastern Mediterranean, where it also invests in the port infrastructure of Turkey and Greece.

China also does not afraid to invest into Serbian outdated steel and mining companies. These investments give Serbs jobs and new life for depressed industrial areas. Although environmental issues are often under concern, many social problems are being solved with Chinese money. Which the Serbian Government is unable to solve by its own.

Obviously, Serbian Government understands its dependence from Chinese investments. And most importantly, the China understands this dependence. After all, they give jobs not just to people, but to voters. The situation with the COVID-19 epidemic made this dependence only deeper. Belgrade expected on Chinese money to support the economy, which was least affected by the pandemic among Balkan states.

Experts say that Chinese investments also have influence on Serbian foreign policy. But the main thing is that the change of political leadership in Serbia will have little effect on Chinese position in the country. China maintains ties with Serbian opposition parties as well. So the importance of Chinese investment for Serbian economy will continue in the future.

In addition to the political factor of Chinese presence in the Balkans, there is a traditional concern about technological invasion in communication and digitalization industries of the region. Also China is investing actively in communications and digital technologies in Serbia. For example, Chinese technologies of “Smart City” are actively offered for local municipalities.

Western countries traditionally very cautious with Chinese communications and digital technologies. They have reason to suspect Chinese producers of gathering information and even spying for the Chinese government and the Communist Party.

Today, Chinese investment in Serbia is estimated at 7 billion euros. Most of these funds are Chinese loans. Therefore, Serbian relations with China are characterized by such factors typical of Chinese foreign economic activities as: trade imbalance, questionable quality of investment (more words than money itself), when China gives money to its companies and imports its workers.

Another problem for Chinese investment is the different legal and regulatory framework and standards in China and the European Union, which could potentially create additional problems for Serbian European integration process.

According to Igor Novakovic, director of research at the ISAC Found, Chinese presence potentially could put Serbia “between two fires”. In situation of increasing tensions between the West and China, Serbian Government may face a difficult future.