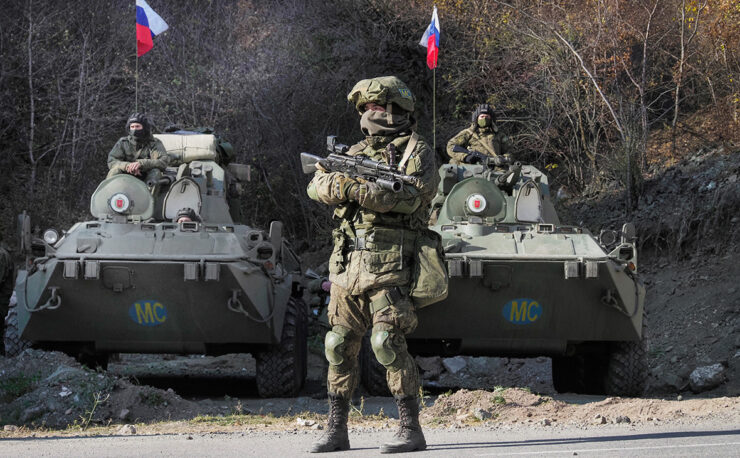 The war of formats in the South Caucasus

On November 10, 2021, the South Caucasus will mark the first anniversary of the tripartite Russia – Armenia – Azerbaijan statement, which ended the 2020 Karabakh war. During the last year, the experts, representatives of civil society, and journalists hotly debated the outcomes of the war and the implications of the trilateral statement. Who benefited more from the war – Russia, Turkey, or Azerbaijan? Has the Karabakh conflict been solved or thrown into the dustbin of history, or will the region face new rounds of negotiations and the possible resumption of hostilities? What is the future of Armenia – Azerbaijan and Armenia – Turkey relations? There are no easy answers to all these questions. However, one thing is clear – a year after the 2020 Karabakh war, the South Caucasus is still in the midst of geopolitical transformation, with regional powers vying for influence.

Immediately after the end of the war, Azerbaijan and Turkey put forward the idea of establishing a 3+3 format (Russia, Turkey, Iran, Azerbaijan, Georgia, Armenia) as a primary platform for discussing and solving the region’s problems. The idea is not a new one. The possibility to establish a regional format was discussed back in the 1990s, while Turkey floated this idea immediately after the 2008 Russia – Georgia war. However, these ideas never materialized, and the primary reason was the contradicting national interests and foreign policy goals of the regional states. Georgia was pursuing Euro-Atlantic integration; Armenia was de facto transformed into the client state of Russia, while Azerbaijan was seeking to pursue a balanced foreign policy between Russia and the West, relying on its strategic partnership with Turkey. On a regional level, Russia viewed the South Caucasus as a zone of its legitimate special interests, Turkey, supported by the West, was making efforts to increase its influence, while Iran’s primary goal was to prevent the use of the region by Israel and the US for anti-Iranian activities. However, since mid-2016, this status quo has started to change. The main driver of the transformation was Turkey’s decision to become a relatively independent regional player and bid a farewell to its role as the US junior ally. Russia supported this strategy as Kremlin viewed more independent Turkey as a tangible tool for decreasing the US influence. Given the deteriorating US – Russia relations after the Syrian and Ukrainian crises, Russia decided to exploit US-Turkey tensions and pull Turkey as far as possible from NATO. Russia – Turkey rapprochement laid the ground for successful management of bilateral competition, first in Syria and then in the South Caucasus. Armenian new government, which came to power in 2018, failed to see these changes. This failure, coupled with its decision to reject all offers elaborated before April 2018 to settle the Karabakh conflict, left Armenia effectively alone during the 2020 war and resulted in a military catastrophe. After the war, as Azerbaijan and Turkey put forward the idea of establishing the 3+3 format, Russia and Iran reacted positively. From the Kremlin perspective, this format could replicate the Astana format, established in 2017 by Russia, Turkey, and Iran to deal with the Syrian crisis. Iran also supports this format, as it aligns with Iranian strategic thinking that regional powers should solve regional issues and that external players are not a solution but part of the problem. It may seem that by launching military drills along with Iran – Azerbaijan border Tehran was acting against this format. However, in reality, Iran was signaling to Russia and Turkey that it should be an equal member of the format and have a place at the negotiating table. Iran is not happy to see growing Turkish and Israeli influence in Azerbaijan, but it does not mean that Tehran is against the 3+3 format.

Georgian reaction was a mixed one. First, Georgia stated that it could not participate in any format with Russia, then the Georgian foreign minister said that Georgia should not avoid the new developments in the region, and at the end of the day, Georgian final answer was no. Since the late 1990s, Georgia has viewed Turkey as its strategic partner and the gateway to the West. Thus, Georgia is not interested in rejecting Turkey’s initiatives and playing the role of spoiler. However, Georgia has insurmountable obstacles to participate in any regional format with Russia and can not ignore that fact. The US’s adverse reaction to this format played a significant role in shaping Georgia’s response. Despite growing problems between the Georgian Dream government and the EU and the US due to the domestic political developments in Georgia, Tbilisi can not afford to alienate the West. The October 2021 visit of the US Defense secretary to Georgia and the signature of the memorandum of understanding on the Georgia Defense and Deterrence Enhancement Initiative sent a clear message across the region that Georgia remains under US influence.

The US and the EU are not happy with the outcome of the 2020 Karabakh war as it sidelined them from the conflict settlement process. They view the 3+3 format as another tool to formalize the new geopolitical reality of the region, where the West plays a diminished role. Of course, Turkey remains the representative of the West in the South Caucasus, and especially the US views Ankara as a channel to push forward its interests in the region. However, Washington is not yet ready to fully delegate its authority to Ankara and would like to act both through Turkey and the OSCE Minsk Group.

As for Armenia, Yerevan seeks to postpone the formulation of any clear position towards the 3+3 format. Given the growing Armenian dependence over Russia and Russia’s primary role in providing basic security to both Karabakh and Armenia against the military pressure of Azerbaijan, the Armenian government may think that it is not in a position to say no to Russia. The continuing domestic instability in Armenia despite the victory of Nikol Pashinyan’s party in the June 2021 early parliamentary elections makes the government position even more pernicious. Saying no to Russia may trigger relevant actions by Kremlin to topple the Pashinyan government, which may have harsh consequences for Pashinyan and its inner circle. Meanwhile, the Armenian expert community raises concerns that establishing the 3+3 format would be another blow to the vital Armenian national interests. This format will become a parallel platform for discussing the Karabakh conflict along with the OSCE Minsk Group, which will significantly diminish the already precarious position of the Minsk Group.

Given the resistance of Georgia, Turkey floated the idea of the possible establishment of a 3+2 format (the same platform without Georgia). It is difficult to say how realistic this format is, but much depends on Armenia. If Yerevan agrees to establish this reduced format (3+2), it may become a reality.

On September 24, 2021, Georgia announced the “Peaceful Neighborhood Initiative” launch to promote stability in the South Caucasus Region. Speaking at the United Nations General Assembly, Prime Minister Irakli Garibashvili announced the initiative, saying it would facilitate dialogue and confidence-building and lead to practical solutions to regional issues of common interest with Georgian US and EU partners. The Georgian peaceful neighborhood initiative can be seen as an attempt by Georgia to neutralize the 3+3 format, especially Russia’s involvement. The Georgian idea is to bring together Armenia, Azerbaijan, and Georgia first and then invite other players if necessary. It means that at least theoretically, Russia can be left out as Georgia will always have a veto power whom and when to invite. Most probably, Georgia discussed this initiative with its Western partners before putting it forward. At the end of September, Prime Minister Gharibashvili visited Baku and discussed this idea with Azerbaijani leadership; then, he arrived in Yerevan on October 9. Currently, the South Caucasus faces the “war of formats,” primarily 3+3 vs. 1+1+1. This competition between different options and plans may block all initiatives and keep the regional balance of power as it has been since November 2020. However, from the Armenian perspective, the Georgian initiative allows the Armenian government to postpone its final answer to the 3+3 format and avoid making another step against Armenian vital national interests.