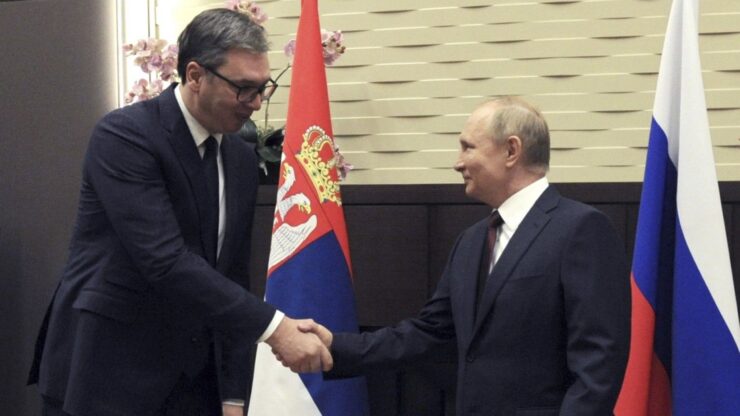 Russian gas is pushing Serbia to the East

Since announcing his departure for Russia for his 19th meeting with Vladimir Putin, Serbian President Aleksandar Vucic has emphasized that the main goal of talks with his “friend” is energy.

Vucic wanted a favorable price for Russian gas, increased deliveries, and a long-term contract in times of energy crisis. After three hours of talk, he got the most of what he wanted: in the next six months Serbia will pay 270 dollars for 1,000 cubic meters of gas, as under the current contract which expires at the end of the year. It remains uncertain whether an increase in Serbian imports to three billion cubic meters of gas per year has been determined.

“Putin told me: ‘Alexander, the solution will be good,’ and even after six months it seems to me that we will have an exceptional price and an increase in volume, but also flexibility,” Vucic said and added that Serbia is saving more than 300 million euros in this way.

The Serbian President did not hide his enthusiasm which will further move him away from the West. “I believe that relations between Serbia and Russia are at the highest level in history,” said Vucic, who describes the two countries’ cooperation as “the fruit of centuries of friendship.”

Vucic also asked for a ten-year-long supply agreement – which is less than the 30-year contract with China or the 15-year contract with Hungary, but it fits into the strategic policy of Russia, which prefers to be sure of having a secure buyer, as well as Serbia, which wants to have reliable gas sources. The agreement will eventually be signed in December, during Serbia Prime Minister Ana Brnabic’s visit to Moscow.

After the first round of tête-à-tête meeting with Putin in the Black Sea resort of Sochi, it seemed that a price agreement was not in sight. President Putin, who later accepted the invitation to visit Serbia next year, has only given assurances that an agreement would be possible. “We will entrust economic entities to complete the appropriate work. We will find such a solution that will be acceptable for our Serbian partners,” Putin said. In this way, he gave full support to the policy of the Serbian president whose economic ambitions largely depend on the price of energy. Though, the Russian President avoided specifying Gazprom’s price in times the price on the world stock exchanges is close to 1,000 dollars per 1,000 cubic meters. Although Russian officials previously promised Serbia that they would have the most favorable gas price in Europe, in October Moscow offered Belgrade the price of 790 dollars per 1,000 cubic meters from January 1. This price is calculated as 70 percent of the market price and 30 percent of the oil formula. However, Serbia, as Vucic explained, was looking for the opposite calculation: that the price would consist of 30 percent of market price, and 70 percent to the oil formula. Hence the price would be 510 dollars per 1,000 cubic meters.

Serbian President stated earlier that the calculation formula for the gas price for Serbia would determine whether the annual consumption of 300 billion cubic meters of gas would cost 300 or 500 dollars per 1,000 cubic meters, i.e. whether Serbia would have to pay “over a billion and two hundred more money.”

“If we get a price of 500 dollars, which is good, keep in mind that it is 600 million euros of direct loss per year for our country, and that’s why the price of gas is crucial,” said Vucic at a press conference before traveling to Sochi.

The formula for the calculation of the gas price basis is decided exclusively by the Russian president. “Putin is the one who decides. If he hadn’t, we would have signed the agreements by now,” Vucic said. He turned out to be right.

Putin decided to leave observers to wonder what political price Serbia will pay for the cheap gas that has long been the main weapon of Russian diplomacy. The gas price is determined as much by commercial reasons as by the geopolitical interests of the Kremlin. The favorable price is a reward for Serbia, and an incentive for Vucic to continue with the policy of getting closer to Moscow. It gives Moscow an unhindered presence at a time when the West expects Belgrade to reduce Russia’s “malignant influence” and China’s investment penetration, which is accompanied by the marketing of Beijing’s centralized policy.

Being a candidate for membership in the European Union, Serbia keeps conducting zigzag diplomacy, but in recent years it has visibly accepted the authoritarian values of the East and moved away from the values of Western liberal democracies. Of the seven EU candidate states, only Turkey has a worse degree of foreign policy harmonization with the EU, than Serbia.

All this is visible through Belgrade’s refusal to join the European Union and the UN Security Council’s resolutions condemning the Russian annexation of Crimea, as well as refusal to support the criticism of other countries’ governing by authoritarian regimes.

“Serbia does not accept the Western order. It is a strategic partner of Russia and China,” Johns Hopkins University professor Edward Joseph recently told me.

President Putin will not change such a trend. Not only because he is establishing his stronghold in Serbia in the Western Balkans, but also because he wants to show his public that Russia is not isolated and has friends in the West.

Before the visit, Vucic raised the gas temperature in the Serbian public. “I don’t know if I will return from Sochi as a colonel or the deceased,” he said using the Serbian metaphor of extreme uncertainty. “I will fight for the best possible formula, for the best possible price of gas,” he said before leaving. “I am nervous because I have a great responsibility to the citizens and I will ask President Putin to meet us halfway”.

It was all well-rehearsed play intended for the Serbian public. Vucic needed the performance to return to Belgrade triumphantly as a great energy savior of Serbia. Putin accepted the game because Russia is carrying about presenting itself as Serbia’s greatest friend.

Vucic is “overjoyed”. “I always have a lot to learn from President Putin, a lot to hear from him,” he said recently on the Soloviev Live YouTube show. “He has lifted Russia both politically and militarily, and, finally, in terms of the strength of economic stability and everything else.”

There were few details about the other topics, although the Russian president was very much interested in Russian-Serbian bilateral relations and the situation in the region, especially in Kosovo and Bosnia and Herzegovina. In political terms, the ‘bilateral relations’ means the maintaining and advancing of the foreign policy closeness of two de facto one-party regimes, which are united by authoritarianism, a stunted rule of law, control over the judiciary, obstruction of opposition opinions, and pressure on the media. In economic terms, besides energy, it means a wide and open door to Russian investments, which are, in fact, very rare due to Russia’s financial weaknesses. Moscow counts on all other segments: from the sisterly relations between the two politically influential Orthodox churches to science and culture.

Serbian President also emphasized that the cooperation between the two countries in the military-technical sphere is at the highest level and that official Belgrade hopes for new agreements. As likely as not part of the Serbian gas savings will be returned to Russia through the purchase of weapons. And Vucic confirmed that Serbia will receive “Kornet” anti-tank missiles by the end of the year. Earlier, Minister for Internal Affairs Aleksandar Vulin announced that under the existing agreements and contracts, the Serbian army and police will receive the latest Russian equipment and weapons.

As for Kosovo, Putin reiterated that Russia’s position on this issue has not changed. According to the media reports, Putin told Vucic that “Russia still support Serbia’s position on the Kosovo issue.” However, it is known that Moscow is not satisfied with the fact that the negotiations on Kosovo were transferred from the UN to the EU.

As for Bosnia, Moscow is certainly interested in maintaining its stronghold in Republika Srpska, whose leader Milorad Dodik is under strong criticism and pressure from the West because of the separatist threats he is creating. Besides encouraging Dodik to behave the way he does, Moscow also does not recognize the High Representative, Christian Schmidt. At the same time, Vucic is constantly trying to maneuver. He recently received Schmidt in Belgrade, but at the same time he does not publicly distance himself when the leader of Srpska threatens to break up Bosnia, extract it from a common state, and when he repeats that his dream is a “unification of two Serbian states.”