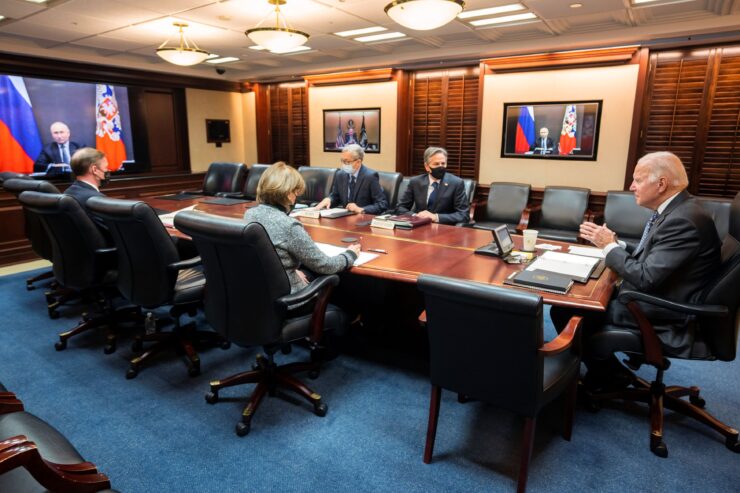 Russia will continue destabilizing Ukraine after the Biden-Putin meeting

The West has promised Russia serious economic consequences if it attacks Ukraine. If this attack does not take place, then the aforementioned consequences will not occur, which, in turn, means that Russia’s current policy towards Ukraine will continue soon.

As it was expected, the long-awaited meeting between Joe Biden and Vladimir Putin ended without any breakthroughs. At least officially. If some agreements were reached between the two presidents, then it will be possible to learn about them over time and based on the practical actions of the United States and its allies, as well as Russia.

Although, certain conclusions can still be drawn from the post-meeting comments made by the White House and the Kremlin.

1. The central topic of the talks between the American and Russian presidents was Ukraine. Other issues that are important for both the United States and Russia – strategic stability, cybercrime, and regional issues, in particular, Iran – were touched upon only partially.

2. The second conversation between Biden and Putin this year means that both sides are generally interested in dialogue with each other. Despite this, it will be quite difficult to have mutual consent on the main topic of negotiations – Ukraine – because of the “red lines”, which every side has for its opponent.

3. The United States is ready for pragmatic dialogue with Russia while identifying the already mentioned “red lines” and the consequences for Russia if these are crossed. At the same time, this does not guarantee that Washington, like the West as a whole, is ready to sharply aggravate relations with the Kremlin. In particular, for the reason that for the US, as well as for the West as a whole, it is very important to prevent escalation around Ukraine and to maintain the fragile balance that is being observed today.

4. Likewise, during the last meeting between Biden and Putin in June, this time the very fact of negotiations was of great importance. This is especially true of the Russian political leadership, which in this way can show that neither Russia nor its president is isolated and that others want to talk to them. Besides, the Kremlin, by such meetings, is trying to get Washington to recognize itself as an equivalent global power that has ambitions, “zones of influence” and which should be respected and negotiated with.

5. Like the talks in June, the meeting showed that the Kremlin’s tactics with the West are generally efficient. Russia creates or raises a degree of tension in a certain region (or regions), and then puts forward its demands to the West in exchange for reducing it. During these negotiations with Biden, such demands were most likely: joint pressure on Ukraine to make it implement the Minsk agreements, as well as guarantees from Washington that NATO will not expand eastward and make Ukraine its member.

6. The serious economic consequences that the US promised Russia was tied to the condition: if there is a full-scale invasion of Ukraine. If Russia does not invade Ukraine, then no sanctions will be applied. Given that warnings and threats of consequences from the West do not have a strong effect on the Kremlin’s behavior, one should expect that Russian pressure and destabilization of Ukraine from within will continue soon.