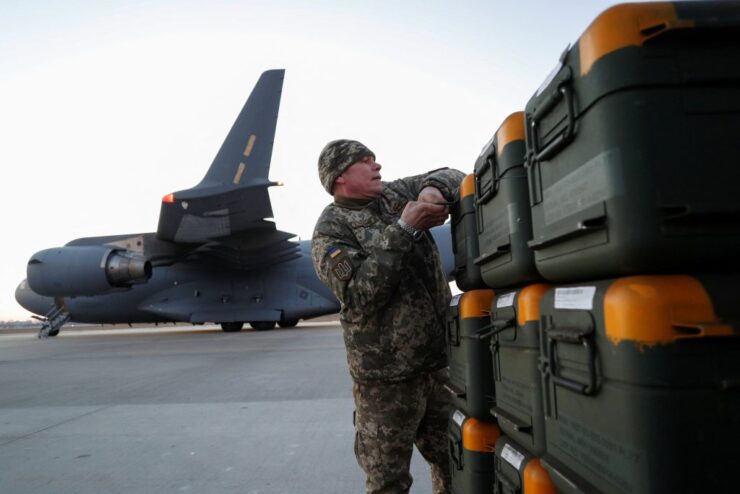 US prepares a lend-lease for Ukraine

Late Wednesday, the US Senate passed a crucial bill draft on the lend-lease program, which should allow President Joe Biden to more effectively supply Ukraine with weapons, ammunition and other necessary materials for better protection against Russian military aggression. Such an initiative by American lawmakers could radically change the situation on the battlefield in Ukraine.

The lend-lease program was first used by the United States during World War II. Under this program, the United States partly on a free aid base supplied their allies with ammunition, equipment, food and strategic raw materials, including oil products. The concept of the program gave the president the authority to help any country whose defense was considered vital to the United States. The Lend-Lease Act, passed by the US Congress and signed by President Roosevelt on March 11, 1941, provided that:

– various weapons and military equipment supplied to the allies, raw materials and other items that were destroyed, lost or used during the war, were not subjects to payment;

– stores transferred under lend-lease, remaining after the end of the war and suitable for civilian purposes, would be paid in full or in part on the basis of long-term loans provided by the United States (mainly interest-free loans).

The United Kingdom, as well as the USSR and the Commonwealth countries, became the main customers of the United States. Lend-Lease was considered a watershed in the course of the war, as it allowed the US to quickly resupply the Allies without time-consuming procedural obstacles.

Here what the 2022 Lend-Lease for Ukraine can mean in practice.

1. Politically. The senators quickly supported the Lend-Lease proposal, as Ukraine proved that it could not only defend itself effectively, but also inflict significant damage on the enemy. The fact that US lawmakers are resorting to actions, which were used during World War II, is another sign that the US believes that Russia’s military aggression is not just about Ukraine, but the entire liberal order.

2. Logistically. The Lend-Lease Act for Ukraine will expedite the transfer of important military equipment and other critical supplies to Ukraine by cutting down on bureaucratic red tape. It will also allow for de facto gifting of equipment with provisions stipulating that Ukraine would pay their cost to the US at a later date.

3. In military terms. Now Ukraine starts implementing its great numerical advantage in personnel. However, due to the large number of people who want to defend their homeland, as well as to the loss or exhaustion of military equipment and ammunition on the battlefield, there is a certain disproportion in the ratio of personnel to weapons in Ukraine. And American lend-lease, together with arms supplies from other countries, should even out this disproportion.

In addition, and no less important, the lend-Lease should qualitatively strengthen the defense capability of Ukraine, in particular, regarding the needs of the Ukrainian military in the weapons that they critically need today. First of all, this concerns weapons that can destroy those Russian assets that are causing today  the greatest damage to Ukrainian civilian infrastructure and civilians: long-range missiles, long-range artillery, warships from which cruise missiles are being launched, aircraft from which cruise missile launches and bombardments are also being carried out.

In other words, missile defense, air defense and anti-ship systems are urgent for Ukraine. In addition, the supply of long-range artillery (in particular, rocket artillery) and ammunition for them is extremely important for the Ukrainian military. As well as a large number of armored tracked and wheeled vehicles, portable anti-tank and anti-aircraft missile systems that have already proven their effectiveness on the battlefield.

Now there have to be a decision by the House of Representatives, after which the bill draft have to be signed by President Biden. After the president signs it, an applied work will begin. We hope that this will happen as soon as possible.