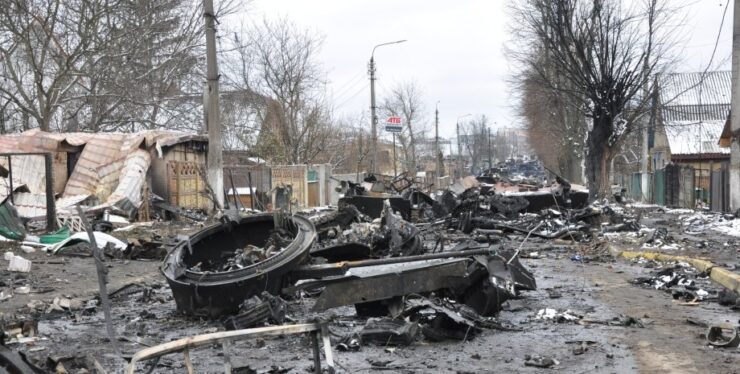 Sergiy Sydorenko: Proving This Can Change the World

The Russian army has committed war crimes in Ukraine, that’s beyond doubt since February 24. The shelling of residential areas of Kharkiv with multiple rocket launcher systems began on the first day of the Russian invasion.

The siege of Mariupol, the carpet bombing of residential areas, including the targeted bombing of hospitals and maternity wards (confirmed by Russian foreign minister Lavrov!) raised the bar of Russian war crimes to unprecedented heights.

Ukrainian politicians and officials did not hesitate to say that we were dealing with genocide, given that Putin’s goal is to destroy Ukraine and the Ukrainian nation as such.

But lawyers refrained from such assessments until recently. It seemed impossible to prove genocide accusations in court.

Now it is changing.

A few days after the liberation of Bucha and other occupied towns and villages north of Kyiv, evidence of genocide emerged. And, even more important, Russia has indirectly recognized the crime it is committing.

It’s yet to decide which body will conduct the criminal proceedings to convict the representatives of the Russian Federation involved in the gravest crime known on the Earth.

While the average person would say that armed aggression is a crime, international humanitarian law (IHL) does not provide punishment for war as such. Instead, several Geneva conventions define “rules and customs of war” that no state is allowed to violate.

During more than a month of occupation of Bucha, the Russian army committed almost all the gross war crimes seen by the IHL. Kidnappings and deprivation of liberty, extrajudicial executions, rapes (gang and in front of relatives), torture, deliberate attacks on civilians, medics, shelters, destruction of housing, use of civilians as human shields… All these crimes deserve punishment. However, they are not sufficient legal evidence to prove genocide and seek international punishment for this gravest crime on the Earth.

This is very important.

If we can prove Russia sought the extermination of Ukrainians, we can guarantee her worldwide condemnation for decades to come.

Just as Nazi Germany, the Hutu leadership of Rwanda, Slobodan Milošević in Serbia…

The latter is very illustrative.

There were a number of war crimes during the Balkan War, but the name “Srebrenica” became a symbol of atrocities, which received unconditional condemnation because this was recognized as a genocide.

Ukrainians sometimes think that the whole world already is on their side. It is not.

European countries are with us, indeed. Hungary, sometimes trying to whitewash Putin’s reputation, is being condemned even by its closest partners.

But Europe is not the world.

China and India make up more than a third of the world’s population. Compared to them, Orban seems pro-Ukrainian!

Also, a number of countries in Asia, Africa and Latin America do not understand why the whole world is focused on Ukraine and not on other military conflicts (which, unfortunately, there are many in the world).

Recognition of the actions of the Russian Federation as genocide will be a turning point for many of them. It is costly to publicly consider “friendly” a government that has committed genocide.

Worse than Syria and Afghanistan

Is it realistic to prove that Russians are committing genocide against Ukrainians? Short answer: yes.

Moreover, what the representatives of Russia are doing fits the textbook definition of genocide.

International law defines genocide as “acts with the intent to destroy, in whole or in part, a national, ethnic, racial or religious group.” Both murder and other actions that lead to the extermination of a certain nationality, ethnicity, etc., fall under this formula, described in the Convention on the Prevention and Punishment of the Crime of Genocide, which has been in force since 1948.

At first glance, the definition appears to be broad because of the phrase “in part”.

Where does “partial extermination of Ukrainians” start? The shooting of a bus with people and bombing of a residential block could be considered a “partial extermination” of the citizens of a country, too; while these crimes are not unique and it definitely does not mean all of them are genocide.

The death toll is not crucial for this recognition.

According to the most conservative estimates, more than half a million civilians were killed during the Soviet occupation of Afghanistan, but by all indications, this war was not genocide.

The key in the definition of genocide is “intention“.

That is, it should be not just the deliberate mass murder of civilians but murders intended to destroy a nation, ethnic group, etc. The aimless bombing of civilian infrastructure covered under other war crimes is not genocide.

Moreover, as in criminal prosecutions, the prosecutors must prove the existence of such an intention.

That is why there are few examples of proven genocide.

For example, no one has ever tried to prove the “genocidal” nature of Russia’s war crimes in Syria, where Russian aircraft led by General Mizintsev (the commander in charge the bombing of Mariupol) bombed Aleppo, where hundreds of thousands were killed and Russian targeted hospitals and residential areas.But in Russia today, they are following the path of Hitler’s Germany so closely that they are now documenting their most heinous crime against humanity.

The main evidence of the genocide of Ukrainians

The definition of genocide includes the extermination of members of an “ethnicity” or a “nationality”. That is, the Convention recognizes that genocide can be based not only on ethnic grounds but also on citizenship. This is exactly what happened in Bucha, Mariupol, etc. Russia is committing genocide against all Ukrainian citizens, not just ethnic Ukrainians.

The Russian Federation has ensured that there are almost exclusively Ukrainian citizens in the places where Russia attacked. They increased the threat to Ukraine for an extended period until most foreigners evacuated.

Another important element of the evidence is that in the occupied areas of Ukraine (particularly in the Kyiv region), the Russians seem to have had a “kill list” of the addresses and names of people who, if found, were to be executed. That is, there was a “part of the national group” for which the assassination was planned in advance.

Usually, genocide takes place without first determining the list of its victims. But this detail, if proved, will make it easier to show:

the Russian Federation has planned a crime of genocide against the Ukrainian nation.

Back in 2008, Putin spoke with foreign leaders at the NATO summit. There he said for the first time that he did not consider Ukraine a state and denied its right to exist. After that, this thesis appeared in other speeches of the Russian dictator and other top Russian officials, from Surkov to Medvedev. Before the invasion of 2022, this thesis returned to public rhetoric.

But the desire to destroy the state is not proof of genocide.

One may claim that the destruction of cultural objects, the liquidation of the state, the ban on communicating in Ukrainian, etc. are destroying the Ukrainian people, these actions are genocide in themselves. But international law does not agree.

The Convention on the Prevention and Punishment of the Crime of Genocide deals exclusively with the infliction of physical harm and physical destruction on people, as well as the prohibition of the birth of children and the forcible removal of children.

All these crimes fall under the definition of genocide only if it can be proved that they were committed with the conscious intention to destroy part of the Ukrainian nation.

Consciously or not, Putin avoided using phrases and statements that prove this necessary intent of genocide.

However, this evidence gap is filled by Russian propaganda.

Also, there is indirect evidence of the scale of the planned (but, fortunately, largely avoided genocide). At the end of last year, many were confused by the news that Russia had officially approved a state standard for mass burials, with detailed rules for arranging “mass graves” per 1,000 people each. It was unclear then how such “policies” could be adopted in the 21st century.

Now the mystery is solved. And this will be heard in the trial of Russia.After all, if it hurts to look at Bucha and Borodyanka now, it is difficult to even imagine the consequences of Moscow’s planned occupation of the whole of Ukraine.

Rusian “media” are accomplices to the crime

Sometimes the crime of genocide and the desire to do it occurs without instructions from the top, in the form of personal inhuman desires of individual soldiers.

This must be acknowledged: far not all the crimes are made by Putin and his close circle.

The guilt is much broader.

An indescribably horrific example is the genocidal rapes in Bucha, reported by Ombudsman Lyudmila Denisova. In this city, the Russians kept 25 girls who had been systematically raped in a basement, explaining their captived that these extensive rapes intended to evoke aversion to have sexual intercourse so that they would not want to have Ukrainian children later.

This is fully consistent with the definition of genocide, even if this horror was not sanctioned by Moscow.

“Historically genocidal rapes took place during the genocide of Armenians, Bengals, Tutsis and others. Their presence indicates an exorbitant level of hatred of the perpetrators towards their victims. Genocidal rape is one of the most brutal manifestations of the crime of genocide and clearly the most heinous,” explains lawyer Oleksiy Plotnikov.

But even if Russian state did not direct these actions, it is Russian state propaganda machine that made these rapes and other crimes possible. Unlike Putin, the media publicly calls for the crime of genocide. This propaganda will serve as the primary evidence in court.

A few days after Bucha liberation, Russian state agency RIA Novosti published an article “What Russia should do with Ukraine.”

The text acknowledges that one of the tasks of the “special operation”, as the war against Ukraine is called in Russia, is “the elimination of irreconcilable Nazis” including the civilian population, as “many of the people are passive Nazis.” According to it, “Nazism” in Ukraine exists in the form of “the desire for independence and the European (Western, pro-American) path of development.”

The RIA Novosti referred to the “liquidation of the Nazis” meaning extermination of Ukrainians, and this is exactly what the world saw in Bucha.

This is a genocide, and it is important to prove this crime legally in international institutions.

It is possible to prosecute the country as a whole: Russia is a party to the Genocide Convention, and the UN International Court of Justice can consider this case without asking its consent. Additionally, criminal proceedings against specific perpetrators, organizers and instigators (for example, within the framework of the international tribunal, the establishment of which is currently being actively discussed) is possible.

The role of Russian propaganda should become part of this investigarion. The tribunals’ experience shows that the propaganda machine’s representatives can end up on the dock.

This was the case at the Nuremberg Trials, where one of the defendants (and convicts) was the editor-in-chief of the propaganda weekly, Julius Streicher. Much closer analogy is the genocide tribunal in Rwanda, where the leaders of the Free Radio of a Thousand Hills and the Kangura newspaper were put on trial. It was they who, with the complicity of the Hutu Rwandan authorities, incited the genocide against the Tutsi. The government itself generally refrained from making such harsh statements while committing the genocide.

As a result, both were on the dock.

Now the Russian leadership, both civilian and military, and their “most prominent” propagandists are facing legal condemnation. Undoubtedly, charges will also be brought against diplomats who carried out propaganda activities and whitewashed the actions of the Russian authorities in the international arena.

editor of the European Pravda

Articles was published at European Pravda