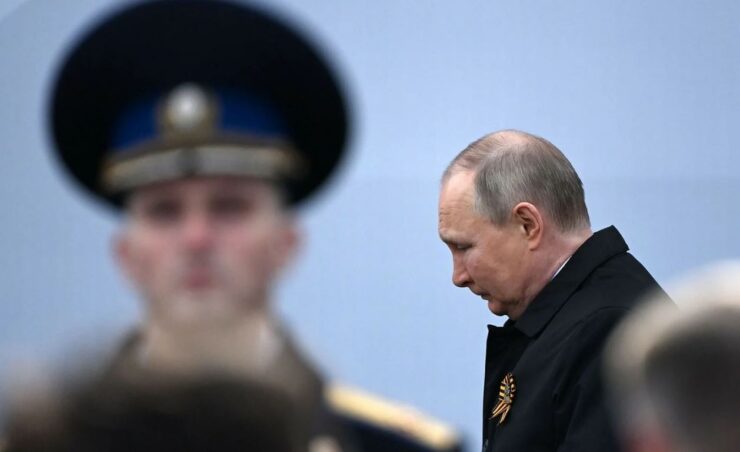 With the beginning of the large-scale Russian aggression against Ukraine in February this year, the plane called “Russia, which had been flying with one engine since 2014, went into a spin and began to approach the ground at breakneck speed. The plane’s captain, Putin, instead of getting out of the spin and stabilizing the flight, with his decision to hold the “referendums” in the occupied Ukrainian territories and open mobilization in Russia, on the contrary, added an even greater rotation to the plane, thereby making it impossible to avoid a collision with the ground.

The passengers of the plane “Russia” are not yet aware of the tragedy of the situation. Putting two and two together is an extremely difficult task for them. For the 7th month in a row, Putin says that his “special operation”, which the “world’s second army” planned to finish in a matter of days or weeks at most, continues to go according to plan. According to official reports of the Russian Ministry of Defense, only 5,000 soldiers died during the “special operation”. The “liberation” of a small area of ​​the so-called DPR/LPR remains the main goal of the “special operation”. And despite all of the above, 300,000 people need to be mobilized in Russia. Here, any sane person would have a logical question: if everything is going according to plan, then why there’s a need for mobilization? Nevertheless, for Russia’s deep nation, this is extremely difficult arithmetic. And it should not be surprising. Throughout its history, the Russian people were taught that thinking is not their prerogative, but the state’s, and that all that is required of them is obedience and loyalty to the tsar. And the state and the king themselves will tell them everything they need. And if they don’t tell, then it must be so. Because they should know better.

So, they seem to suspect that something is going wrong, but they don’t understand what exactly. They look at the captain of their plane with wide-open eyes, and he tells them that everything is going according to plan. At the same time, Putin-the-captain deliberately does not add to his calming assurance one word, which would give a true description of the flight mode of the plain “Russia”, namely: “Everything is according to plan, we are falling.”

The big problem with this plane is that its captain believes that his decision to put the plane into a spin and his subsequent maneuvers can save it. The situation is worsened by the fact that both the co-pilot, flight engineer, and other crew members, instead of removing the commander from control and trying to save the plane, tell the passengers that the plane is not falling, but is only performing a special maneuver, after which it – shiny and beautiful – will be high in the sky again and above all others.

Recent painful defeats and the actual escape of the Russian army from the Kharkiv region, as well as the humiliation of Putin at the SCO summit in Samarkand, have become very dangerous signals for him and his regime. If no attempt is made to correct the situation, the boyars may feel that Putin is weak and rumors may spread among the deep nation that the tsar is not real. The result of such sentiments is likely to be the overthrow of the regime. Moreover, as Russian history shows, this process can be dangerous for the life of the one who is deprived of the throne. For Putin, this is not an option at all, so he has only one way out – to show that he has not lost his grip, that he is still strong, bloody, and merciless, that is, exactly the one that both the boyars and the deep people traditionally fear and respect.

Putin understands that he and his regime will not survive another defeat like the one in the Kharkiv region. It is necessary to somehow stop the Ukrainian army, which has felt the strength and courage, as well as the West, which helps it inflict increasingly painful blows on the empire and its ambitions. And how to do it? The only thing that is left for Putin is nuclear weapons and deep nation, which can be utilized regardless of the consequences. So he took them on.

The fact that Putin will organize “referendums” on the occupied Ukrainian territories on their inclusion in Russia and will continue to threaten the use of nuclear weapons if Ukraine tries to liberate them, did not come as a big surprise. The probability of such a scenario was discussed long before the Kremlin decided to implement it. And this, by the way, suggests that the veil of the mysterious “multi-mover” has finally fallen from Putin, and he has appeared in the image of a fairly predictable, average, cornered dictator whose steps are easy to read.

Putin desperately hopes that, like Stalin in the late 1930s, he will tighten the screws to the maximum, hammer into the heads of his deep nation that his “special military operation” is a holy war against the West and its militarist NATO machine, and send hundreds of thousands of Russians to slaughter – and a big victory, like in 1945, will write everything off. After all, as they say, winners are not judged. And the winners themselves write the history of their victory, in which they tell about the brutalities and atrocities of their enemies and the heroic deeds of their soldiers, as well as the wisdom of the military and state leadership. However, the reality is that Putin will not have his 9th of May. After all, unlike in the middle of the last century, in 2022 the Kremlin itself is an absolute evil against which almost the whole world has united and which has an understanding that this evil must be stopped. That is why, most likely, Putin will not face the fate of Stalin the winner, but of the last Russian emperor, Nicholas II, whose rule was put to an end, in particular, by those who even yesterday went to the front to die for him.

For Ukraine, Putin’s “referendums” change little. It is very difficult to scare Ukrainians with them after all that they experienced and continue to experience after February 24. They will continue to liberate their territories from Russian occupation. But for Putin, “referendums” are moves in the zugzwang. These are new sanctions, even greater international isolation, even greater problems for the economy, and even greater socioeconomic tension with all the resulting consequences for the regime.

As for the mobilization, which, despite the Kremlin’s statement, is unlikely to be partial (there is already a lot of evidence about this), it leaves no chance for the plane “Russia” to get out of the spin.

Mobilization was the greatest fear of the Russian deep nation. Now it has become a reality. Hundreds of thousands, of unprepared cannon fodder, will be thoughtlessly thrown into the bloody millstones of war.

For years, Putin, his generals, and propaganda talked about the ultra-modern “world’s second army”, and showed beautiful cartoons about the Wunderwaffe, which “nobody else in the world has.” Now, hundreds of thousands of Russian men, as well as women (the “partial” mobilization also applies to them), can see for themselves what the “world’s second army” really is. That it is the same Soviet one, only with slightly more modern weapons. Although taking into account the fact that the Ukrainians have already destroyed a significant part of it, and in Russia, the weapons and equipment of the 1960s are being removed from storage, the modern Russian army increasingly resembles an ordinary Soviet army, with all its characteristic “features”. The same poor provision, neglect not only of the needs of the personnel but also of their lives, rude attitude, incompetence of the commanders, senseless orders and intolerance of any initiative, hypocrisy, bribery, strained relations on an ethnic and religious basis… And all those who will see that and will be lucky enough to return home will probably have a lot of questions for their leader. And they will be asked not in the way the youth and the intelligentsia do today. No, these will be combat veterans who have undergone hell and whom the batons of the police, OMON and National Guard will not stop, but on the contrary, they will “warm them up” and embitter against the regime even more.

Putin desperately hopes that this will not happen and that hundreds of thousands of potential corpses of Russians will help him somehow overcome the resistance of Ukraine and the West, and thus – keep the throne. However, there are no good solutions in zugzwang. Therefore, everything he is doing now and will do in the future is only a continuation of the agony of his regime and current Russia itself.