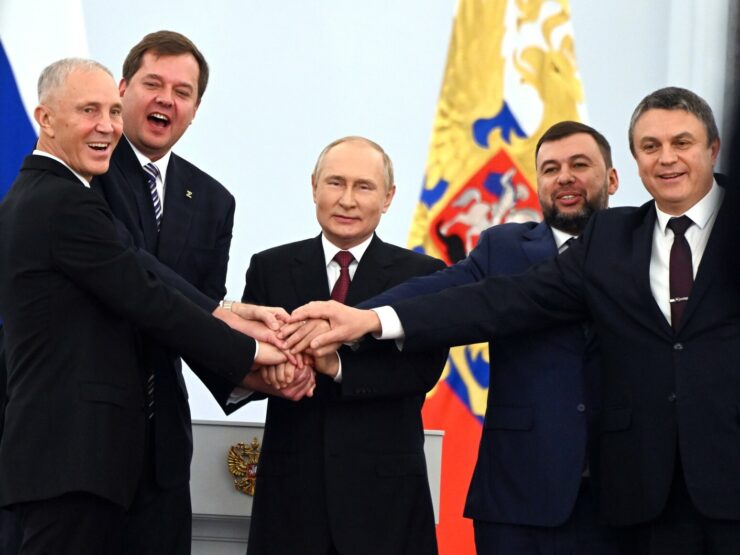 The situation with Putin’s so-called “special military operation”, which is de facto – the Russian-Ukrainian war – continues to develop in a negative way for the Kremlin. The second serious military humiliation of the Russian army in the last month took place. In addition, last week, new elements were introduced into the course of the war, which further aggravate the already unenviable position of Putin’s Russia.

So let’s talk about all this in order.

Ukraine continues its successful counteroffensive operation in the Kharkiv and Donetsk regions. Ukrainian forces encircled and destroyed the Russian Lyman grouping and liberated this important town. The Russian command, for obvious political reasons, or rather Putin’s order, tried at any cost to keep two important cities of the Donetsk region – Lyman and Yampil. However, the Russians failed to stop the advance of the Ukrainian troops. Moreover, fulfilling the will of their leader, the Russian commanders drove their Lyman grouping into a pocket, the defeat of which was only a matter of time and scale.

As has been the case more than once, the Kremlin invents various excuses to hide its shameful defeat on the battlefield. This time, they were assigned to a former FSB officer, a participant in the first stages of Russian military aggression against Ukraine, and now a military commentator, Igor Girkin. In his commentary on the situation around Lyman, he tried to reassure the Russian audience that this was a secondary direction for the Russian army and that the success of the Ukrainian army there would not give it anything strategically. “Frankly speaking, looking at the (forcedly) defensive operation of our troops in the Lyman-Yampol-Drobyshevo area, I initially assumed that it was of a “deterrent” nature. That is – the enemy – advancing on the Secondary direction (for us) and spending reserves here to achieve a more “media” than a decisive military result – from the very beginning was restrained by not the most combat units (BARS (Combat Army Special Reserve) without heavy weapons)… The capture of the Lyman doesn’t give the enemy further strategic development. The maximum is operational-tactical, but no more,” Girkin wrote.

However, regardless of whatever FSB transmits through Girkin for its internal consumers, the encirclement and defeat of the Russian Lyman grouping is another Russia’s great military humiliation in this war. Moreover, for the first time since the beginning of this war, and in general – for the first time since the Second World War, the Russian troops got into a pocket. Secondly, from a purely military point of view, gaining control over Lyman will allow Ukrainian forces to block the Russian supply routes that go through Svatove to Kreminna (both of them – in the Luhansk region). Kreminna, in turn, opens the way to the rear of the Lysychansk-Severodonetsk agglomeration. That is, there will be opportunities to advance deep into the Luhansk region.

Another interesting conclusion arises from the encirclement of Russian troops near Lyman. Namely: Putin interferes in the management of the troops. After all, there is nothing else to explain the fact that during this month, Russian troops fall into similar “unpleasant” situations twice in a row: first at Izyum, and now at Lyman.

Now, let’s talk about mobilization. As one can see, it is being held exactly not the way Putin wanted it to be. During its announcement, he appealed to the Russian people with a call like: “Get up, great country, get up for a mortal battle.” And he hoped that the Russians would hear him and go and die for him. But, from the long queues of Russians at the borders with Russia’s neighboring states and at Russian airports, one can see that not everyone wants to follow Putin in mortal combat. Some, in order not to be mobilized, resort to more radical methods – engage in self-mutilation, and some even commit suicide.

From the first days of Putin’s mobilization, it became clear that the mobilized would be nothing more than cannon fodder: they would be thrown to the front without proper training, provision, and armament. And less than 10 days have passed since the announcement of mobilization – there are already news about the first dead and captured Russian mobilized.

At the same time, Russia is opening and grabbing out its military warehouses and everything it has left. And these are 50-60-year-old weapons, in questionable technical condition, with low combat characteristics and level of protection. For example, it was recently recorded that an echelon with completely “naked” (without defense systems) T-72 tanks was transferred to Ukraine.

At the same time, on September 28, the United States announced a new military aid package for Ukraine in the amount of $1.1 billion.

This package should include, in particular, 18 HIMARS systems and ammunition for them, 150 HMMWV vehicles, 150 tactical towing vehicles, 40 trucks and 80 trailers for transporting heavy equipment, 2 UAV radars, 20 multi-purpose radars, anti-UAV combat systems, tactical protected communication systems, surveillance systems, etc. That is, the US response to Putin’s mobilization is the further arming of Ukraine. As a result, the following situation emerges – high-precision Western weapons against unprepared, poorly equipped, and poorly motivated cannon fodder. And one does not have to think for a long time about what will be the result of the “iron vs meat” confrontation.

As for the new elements in the war, Putin (expectedly) introduced them the first, signing decrees on the annexation of the occupied regions of the south and east of Ukraine. At the same time, as expected, he threatened to use nuclear weapons if Ukraine continues to try to liberate the annexed territories. His message, which he voiced during his speech on the occasion of the annexation of the newly occupied territories to Russia, came to the following: “Russia is ready for negotiations (Putin also spoke about his readiness for them during the SCO summit in Samarkand), but it will not discuss newly annexed territories. If you do not accept our conditions and continue to try to liberate these territories, we will use nuclear weapons.” At the same time, explaining his right to use nuclear weapons, he pointed to the Americans: “The USA is the only country in the world that used nuclear weapons twice, destroying the Japanese cities of Hiroshima and Nagasaki. By the way, they created a precedent.” That is if the USA can do it, so can Putin. He also found a justification for his destruction of Ukrainian cities and their civilian population. According to Putin’s logic, Russia can do this because the United States, together with the UK, “turned Dresden, Hamburg, Cologne and many German cities into ruins without any military necessity during the Second World War.”

In general, Putin’s entire speech came to blaming the West for all the ills of humanity and the fact that he “all this time was looking for and continues to look for a new chance to strike at Russia, weaken and destroy it, fragment its state.” And only its strong ruler Putin can prevent this. But for this to happen, the mobilization and unity of the entire Russian people around him are needed. It was also obvious that Putin wanted to evoke in Russians the same emotions towards him that they had after the annexation of Crimea. But today is not 2014, but 2022. And the West will no longer swallow another Putin mockery of international law and will not persuade Ukraine to make concessions to a crazy dictator. Moreover, during these eight years, the Ukrainian army has also changed radically. Putin’s next annexation of Ukrainian territories does not change much for it. It will continue to liberate occupied territories – and even if Putin uses tactical nuclear weapons. For Russia, such a step by its leader will have extremely negative consequences. This has already been openly commented on in Washington. “If Putin uses a nuclear weapon, if he follows through on his threat in Ukraine, I would consider that an attack on NATO writ large… The response should be stunning, and the consequences for Russia catastrophic,” senior senator Lindsey Graham said.

Another element was made by the President of Ukraine, who made two important statements based on the results of the meeting of the National Security and Defense Council. The first was that after the annexation of new territories by Russia, “Ukraine will not conduct any negotiations with it while Putin is its president.” The second is about the fact that Ukraine is officially applying to join NATO. “We trust each other, we help each other and we protect each other. This is what the Alliance is. De facto. Today, Ukraine is applying to make it de jure. Under a procedure consistent with our significance for the protection of our entire community. Under an accelerated procedure. We know it’s possible. We have seen Finland and Sweden start accession to the Alliance this year without a Membership Action Plan. This is fair. This is also fair for Ukraine. This is the consolidation at the level of the treaty of what has already been achieved in life and what are our values… We are taking our decisive step by signing Ukraine’s application for accelerated accession to NATO,” President Zelenskyi said.

And the third element was the West’s reaction to the annexation and blackmail of the use of nuclear weapons. Instead of being scared and accepting Putin’s new conditions (which he expects), the European Union, for example, has indicated that it will never recognize illegal referendums held in the occupied territories of Ukraine and will increase its sanctions to increase pressure on Moscow. For his part, President Biden said that the United States will recognize Ukraine in its former borders and that the United States will support Kyiv’s attempts to return the Ukrainian territories annexed by Russia.

At the same time, news came from Washington that the USA is imposing sanctions against the head of the Russian Central Bank, Elvira Nabiullina, the deputy head of the Russian government, Alexander Novak, members of Dmitry Medvedev and Mikhail Mishustin families, as well as against the Federation Council. In addition, the US Treasury has restricted the activities of companies from Belarus, China, and Armenia, which support Russia.

Therefore, it is obvious that every Putin’s step only worsens his and Russia’s situation. Together, they passed another point of no return, which approaches the inevitable collapse of Putin’s regime and the modern Russian state.