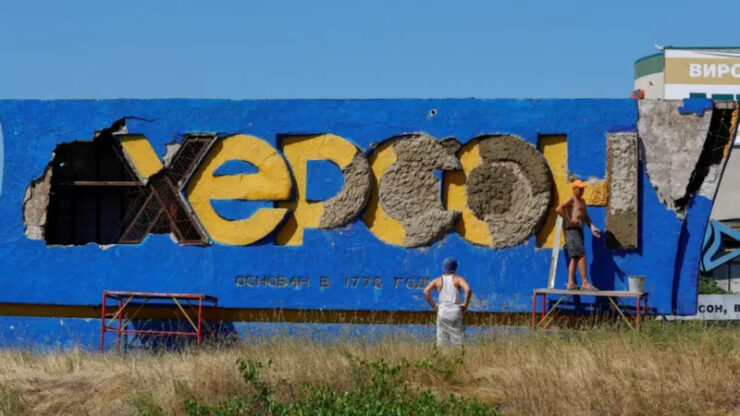 Budanov: Russians Will Defend Kherson Rather than Withdraw

The Russian occupiers are only creating the illusion that they are leaving Kherson, but in fact, they are moving new military units there and preparing to defend the occupied regional centre.

Kyrylo Budanov, head of the Main Intelligence Directorate of the Ministry of Defence of Ukraine in an interview with Ukrainska Pravda

Budanov said that Sergey Surovikin, who commands the southern group of Russian troops in the war against Ukraine, may be preparing the ground for smoothing the reaction of Russian society in the event of the surrender or loss of Kherson, but it is not yet possible to say that “right now they are fleeing Kherson.”

“No, there is no such thing,” Budanov stated.

“In many aspects, this is an information operation as well as manipulation. Some facts are certain. For example, Promsvyazbank is being withdrawn, along with other financial structures that the Russians have put there. Moreover, as they withdraw cash and remove servers, the so-called occupation authorities are transferring – yes, transferring – all patients who cannot walk, seriously wounded people are being taken out, they are trying to discharge those who can walk from hospitals as quickly as possible and are conducting this crazy information campaign that “we care about people” and the like. In other words, they are creating the illusion that everything has gone. At the same time, on the contrary, they are bringing in new military units there and preparing the streets of the city for defence.”

The head of military intelligence said that the Russians understand that if the Armed Forces of Ukraine at least take control of the Kakhovka dam, which is now the only fully functioning transport artery, then “they will have to make a very quick decision” or leave the city extremely quickly.

Otherwise, the Russian military may find itself in a similar situation to the one in which the Ukrainian units in Mariupol found themselves in the spring, Budanov said.