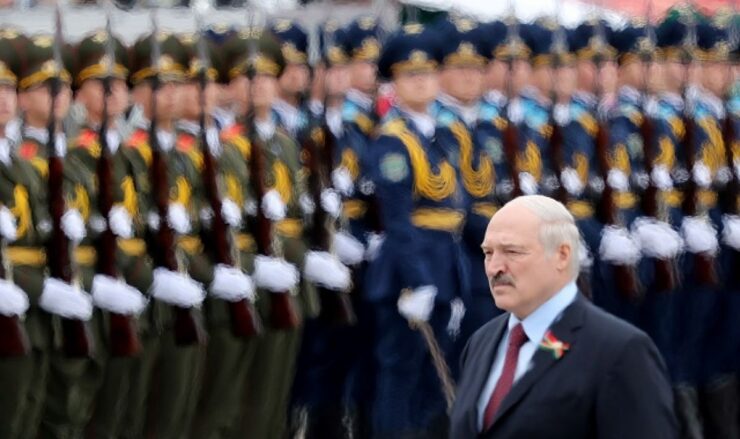 The war. Putin is trying to turn the course of the war to his advantage

Recently, it has become more and more obvious that Kremlin is trying, by all means, to turn the course of the war to its advantage. For this purpose, in Russia, in addition to the first stage of mobilization, the second is already being launched, the leadership of the so-called special military operation has been changed, the shelling of Ukraine, in particular, of its critical infrastructure, has been intensified, and Belarus has increasingly been drawing into the war.

After the incident on the Crimean bridge, Putin, quite expectedly, ordered massive missile strikes against Ukrainian cities and Ukrainian critical infrastructure. He needed to respond to the painful slap he received in the form of the Crimea bridge blast right after his birthday. No one in Russia had any doubts that no one else but Ukraine was behind this blast, and that it is she who should answer for it. The Russian people, and especially their passionate part, demanded an immediate and extremely tough response from Putin. And Putin could not leave such calls unanswered – the story with the bridge touched him personally and it was necessary to calm the Russian people, thirsting for revenge. The only way Putin could satisfy his and the people’s desire for vengeance was to launch missile attacks on Ukraine.

What happened on Monday, October 10, is the second such missile attack on Ukraine after February 24, and in terms of critical energy infrastructure, probably the heaviest attack in history. The Russian military launched more than 80 missiles at Ukraine, about 45 of which were shot down by Ukrainian air defense. In addition to missile attacks, the Russians launched strikes with 17 Shahed 136 suicide drones from the territory of Belarus and Crimea. They aimed mainly at energy infrastructure facilities. As a result, 14 people were killed, and about 100 people were injured. Russia continued to inflict similar strikes with varying intensity throughout the following week.

At the same time, it should be noted that these air attacks are not only a consequence of the incident on the Crimean bridge. The probability that closer to the onset of cold weather, Putin will use the tactics of attacks on the critical infrastructure of Ukraine and its civilian population, has been discussed before. In such a way, at this stage of the war, he is trying to achieve two goals: to cause maximum damage to the Ukrainian energy sector and, as a result, to create a collapse in the Ukrainian economy, as well as completely demoralize the Ukrainian population, instilling in them a sense of fear and defenselessness before Russian weapons.

To fulfill, in particular, these essentially terrorist tasks, Putin appointed General Surovikin, who is also known as the “executioner of Aleppo”, “Syrian butcher” and “General Armageddon”, to command a “special military operation” (SMO). Surovikin received such nicknames for the fact that, on his orders, the merciless bombardment of Syrian cities and the destruction of their civilian population were carried out. The fact that the new commander of the so-called SMO will unquestioningly carry out Putin’s orders is evidenced by his “rich military experience”, as well as by the prospect for him of taking, for example, the position of Chief of the General Staff Gerasimov, who has lost Putin’s confidence.

Concurrently with this, Russia launched an information operation accusing Ukraine of blasting the Crimean bridge and the involvement of other states in this. According to the results of a quick investigation in Russia, the explosive that was allegedly put in the truck that, according to the FSB, caused the explosion on the bridge, was moved from Odessa to Bulgaria. After that, it was allegedly forwarded to Georgia, then to Armenia, after which – to Russia. At the same time, it is not entirely clear how customs and border guards in all these countries could not detect explosives, which, as expected, were of considerable volume. This especially applies to Bulgaria, Georgia, and Armenia, where the border was passed more than once – at the entrances and exits. The purpose of such an information operation is to blame Ukraine for blasting the bridge, justify the strikes on it, and show that it has international accomplices who are also involved in terrorist actions against Russia.

But no matter what the Kremlin came up with to justify its latest crime against humanity committed in Ukraine, its situation has only worsened. From a military point of view, spending the rest of its long-range and “precision” weapons on non-military purposes did not bring him any results. Important military installations have not been destroyed, no devastating impact on the energy system of Ukraine has been rendered, and the level of motivation of the personnel of the Ukrainian army, on the contrary, has increased significantly.

In addition, regular rocket strikes on civilian objects in Ukraine had extremely negative image consequences for Russia. Russia once again appeared in the eyes of the world community as a country of barbarians and received from it a sharp condemnation of his actions. The PACE, for example, recognized Russia as a “terrorist regime”, and Russian political parties as its “accomplices”. The Kremlin also deprived all its agents and useful idiots in the West of the arguments that they have recently been actively voicing to promote the idea of the need for peace with Russia on its terms.

That is, after Russia annexed new Ukrainian territories, which are not recognized in the world by anyone except its few “friends” (which, in particular, was shown by the recent UN General Assembly vote), Putin’s nuclear blackmail and massive missile attacks on Ukrainian territory, the West sent the Kremlin a clear message that it will continue providing Ukraine with the necessary military support.

At the same time, it is becoming clear that the Kremlin is putting more and more pressure on the President of Belarus Alexander Lukashenko, and is trying to get him even more involved in the war against Ukraine. This is evidenced both by the statements of Lukashenko himself and by the processes that are taking place in Belarus today.

Firstly, Belarus supplies weapons, ammunition, and other material and technical equipment for the Russian army. In particular, over the past week, there has been a transfer of tanks, artillery systems, engineering equipment, trucks, and special vehicles from Belarus to the Russian Belgorod and Rostov regions.

Secondly, on the same day that Russia launched missiles at civilian objects in Ukraine, Lukashenko said that he and Putin had agreed to deploy “a common regional group of troops on the western borders” in Belarus. As part of this process, the first units of the Russian army consisted of those who were recruited in frames of “partial mobilization”, and have already begun to arrive in Belarus. At the moment, up to 1,000 Russian servicemen are known to have arrived.

Thirdly, Lukashenko decided to conduct covert mobilization in the country to man the combat units of the Belarusian army, which will be held under the guise of testing its combat capability. The number of people who are planned to be mobilized is still unknown.

Fourthly, the Belarusian propaganda persistently instills the Belarusian security forces and the local population the idea that an attack from Ukraine is inevitable since the West is supposedly pushing it to do so.

As for the Belarusian army, on its own, it can practically oppose nothing to Ukraine. Only special operations forces are ready to fight, in which the degree of equipment is at the level of 70-80%. Some logistic units are approximately at the same level, but the vast majority of other branches of the armed forces are at best half manned. The quality of military equipment is inferior to Russian, which, as it is known, is being actively destroyed in Ukraine. Surely, the shortage in the manpower of the Belarusian units is supposed to be overcome with mobilized ones – for this, Lukashenko is conducting covert mobilization. On the other hand, the Belarusian units as part of the “common regional group”, given Lukashenko’s complete dependence on Putin, will most likely be subordinate to the Russian command, that is, to the “Syrian butcher” Surovikin.

There can be two main results of the described above processes in Belarus, which the Kremlin is striving for. The first is the “maximum task”: the creation of a Russian-Belarusian strike force for a second campaign against Kyiv and the seizure of the territory of the western regions of Ukraine. Thus, on the one hand, a second front will be opened against Ukraine, which will draw on itself the combat units and the reserve of the Ukrainian army, and on the other hand, the supply routes of the Ukrainian army, which go from its western borders, will be completely or partially cut off. The second – and this is the “minimum task”: concentrating on the Belarusian-Ukrainian border, but without cutting it off, Belarusian and Russian units to divert significant forces of the Ukrainian army and prevent them from being deployed to strengthen those forces, operating in the eastern and southern parts of the country.

In addition, by increasing the threat from Belarus, the Kremlin wants to put psychological pressure on the Ukrainian population.

Summing up all of the above mentioned, it should be noted Putin’s great desire to turn the course of the war to his advantage by the onset of cold weather. How successful he will be will largely depend on the opposition to this by the Ukrainian army, and the Ukrainian authorities, and on the speed and completeness of delivering by Ukraine’s international partners of their promises to strengthen its defense capability.