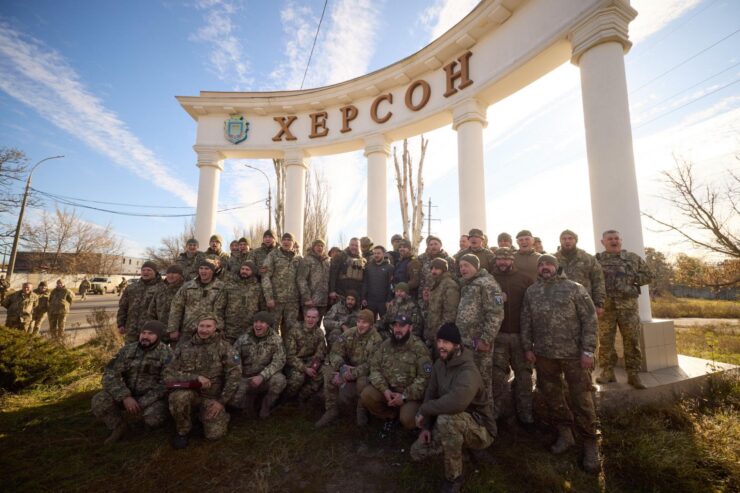 The war. The loss of Kherson is another big shame for Putin

On November 11, the main part of the Russian troops left the right-bank part of the Kherson region, which had been under their occupation for more than eight months. Kremlin propaganda called this withdrawal a “maneuver to move to prepared positions on the left bank of the Dnipro in strict compliance with the approved plan.” In fact, as in the case of the previous “regroupings” and “goodwill gestures” of the Russian troops, the mentioned “plans” for such “maneuvers” were created by the exceptionally successful actions of the Ukrainian army. These were the effective actions of the Ukrainian units that created such conditions for the Russian troops on the right bank of the Dnipro, in which the Russian military command was forced to make another painful decision to retreat. For several months, the Ukrainians have turned the bridgehead on the right bank of the Dnipro into a kind of anvil, which they hit with methodical frequency and accuracy. And systematic strikes on bridges across the Dnipro have narrowed the possibilities for the Russians to supply weapons and ammunition and limited the maneuver of troops. The right-bank part of the Kherson region became a black hole for the Russian troops, constantly absorbing human and weapons reserves. At the same time, there was no hint that this hole would close and that these sacrifices were justified in the context of implementing the tasks set by the Russian command in this region.

It has to be clear that the liberation of Kherson and the right-bank part of the region was not an “easy walk” for the Ukrainian forces. They had to break into the enemy’s line of defense and overcome his fiercest resistance. And this enemy was strong enough, given the fact that the right-bank Kherson bridgehead was defended by the most combat-ready forces of the Russian army: the battalion tactical groups from the 7th and 76th airborne assault divisions, the 98th airborne division, 11, 31, 83 airborne assault brigades, the 45th brigade of special forces of the Airborne Forces, 90th Tank Division, 19th Motorized Rifle Division, 126th Coastal Defense Brigade, 810th Marine Brigade, 37th Motorized Rifle Brigade, 10th Special Forces Brigade, as well as operational units of the Russian Guard. The command of this grouping, which, according to various estimates, numbered about 30 thousand people, was carried out by the commander of the Russian Airborne Forces himself.

The liberation of Kherson and the entire right-bank part of the region by the Ukrainian forces have very important consequences for the further course of the Russian-Ukrainian war.

First, one cannot fail to note the symbolic significance of this event: since the 24th of February, Ukraine has already liberated more than 50% of the territories seized by Russia after a full-scale invasion.

Secondly, the surrender of Kherson means the inability of the Russian army to seize the initiative in the war even after full-scale mobilization. This is another big defeat of the once “second army of the world” and another personal humiliation of Putin.

Thirdly, it creates the preconditions for the liberation of the entire Kherson region and the further liberation of the Ukrainian South, including Crimea. In addition, this reduces the number of attacks on Mykolaiv, and also makes it impossible for Russia to capture Odesa and create a corridor in Transnistria. The latter, in turn, significantly reduces the threat to Moldova, which would have certainly been the next target of the Russians if they had succeeded in the Odesa direction.

Now the Russians are trying to accumulate a large number of troops on the left bank of the Dnipro to shell the right bank, in particular, Kherson, which they lost. For their part, the Ukrainian forces are already moving their equipment to the right bank of the Dnipro in order not only to strike back (by the way, they have already started doing that) but also to carry out artillery preparation to create conditions for the further liberation of the entire Kherson region and the South of Ukraine as a whole.

It is important to note that the “maneuver” of the Russian troops from Kherson took place under the command of “General Armageddon” Surovikin, who substantiated it with the peculiarities of the situation. But, it was Surovikin, who commanded the South grouping of troops and organized the defense in the Kherson region, whom himself created these peculiarities. That is, it turns out that now the entire so-called special military operation is commanded by the author of one of its biggest failures.

Another “achievement” of this genius of military art is the recent utilization of Russian marines from the 155th marine brigade (Vladivostok) in Pavlivka, Donetsk region. The offensive near Pavlivka, by the way, was perhaps the only offensive of the Russian troops carried out during the time of Surovikin’s command. The losses of marines were so great that they wrote an open letter. The Ukrainian General Staff did not announce their data on the losses of the Russians in this area, but in its report, it was said that a group from the Investigative Committee of Russia was sent to Donetsk to investigate the significant losses of the personnel of the 155th marine brigade on the territory of Ukraine. Later, the Ukrainian military confirmed the significant losses of the 155th brigade and reported that the Russian command sent officers for ideology from the Pacific Fleet to the area to put out the riot and raise the morale of the broken units.

Interesting and quite indicative is also the fact about how the elite of the Russian army acted near Pavlivka. The Russians entered the village in tanks, after which the Ukrainian units, as if in a shooting range, began to shoot them down. And this is after the Russians used this tactic more than once during the war, and each time it had the same result for them. This, in turn, speaks more than eloquently about the quality of the Russian military command, which, after eight months of the war, continues to utilize its most combat-ready troops mindlessly.

The desire of the Russians to establish control over this village is explained by the fact that they want to push back Ukrainian weapons, primarily high-precision artillery, as far as possible from an important logistical artery: the railway branch from Debaltseve, through Volnovakha, to Melitopol and Kakhovka. The fact is that all the logistics of Russians are tied to railways because huge volumes need to be transported by echelons as it is almost impossible to do this by road. And today, the Russians cannot relocate weapons and equipment in the required quantities for their southern grouping from Crimea, since the Crimean bridge is not working, and will not work for a certain time. According to some estimates, the replacement of the damaged part of the bridge’s railway track should be completed only until September 2023. Therefore, the Russians need to create a new supply line, which, if not a full-fledged replacement, will at least significantly complement the currently limited Crimean one.

However, such an important promising line for the Russians was under the fire control of the Ukrainian troops located in the area of ​​Vuhledar and Pavlivka, which almost excluded its full-fledged functioning.

Therefore, the Russian military command needed to launch an offensive on Pavlivka to at least move the Ukrainian forces away from this railway line to a distance that would make it possible to protect it from their fire impact. The result of this offensive is known. As of today, the Russians have not only failed to accomplish this task, they have not even come close to starting it.

Despite serious losses, the Russians do not abandon their attempts to capture Pavlivka and hostilities resume there. They still have some forces in their reserve for this, particularly “fresh” ones, replenished mainly by mobilized ones. And the Russian command will try to bring them into battle with the aim of “increasing efforts” to achieve their goal. But, given the previous “successes” near Pavlivka and the Ukrainian defense in depth in the area, it is unlikely that they will achieve any positive results in the future.