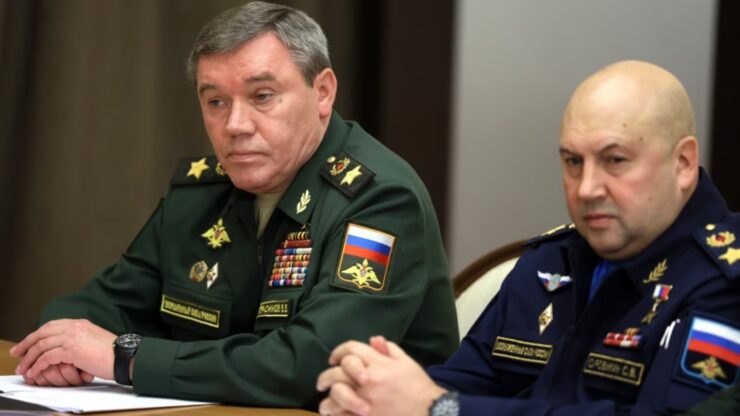 Today, the most difficult sector of the front is Bakhmut-Soledar, where the focus of Russian attacks has recently shifted towards the latter.

Soledar is located to the north of Bahmut and the attack on it is part of the offensive on Bakhmut, which Russian units have been trying to take with frontal attacks for 6 months, but they cannot break through the Ukrainian defenses there. The offensive on Soledar has for the Russians both tactical and propaganda significance.

As for the first, having faced the well-organized defense of Bakhmut, the Russians realized that it would be impossible to capture it from the front and decided to circumvent it from the flanks. Massive attacks on Soledar, which is the left flank of Bakhmut’s defense, began at the end of December last year. To achieve success, the Russians concentrated there the readiest units of the PMC “Wagner”, as well as elite army units.

As for the propaganda value, the capture of Bakhmut, which Russians planned to complete before the 1st of January, should have been presented as a great success. However, having achieved nothing near Bakhmut, they chose a less significant goal, which is Soledar, and tried to achieve success there. Moreover, the capture of Bakhmut, and especially Soledar, is of great personal interest to the “Wagner’s” owner Yevgeny Prigozhin, who, to improve his status in Russia, is trying to prove to everyone that his PMC operates much more efficiently than the regular Russian army.

According to the Ukrainian General Staff, as well as the Ukrainian military themselves directly from the battlefield, the fighting for Soledar continues. At the same time, there is information that the Russians control most of the districts of the town. However, even this situation doesn’t give them any operational advantage in this direction of the front.

First, the territory occupied by the Russians is under constant fire control by the Ukrainian defense forces. Moreover, to the northwest of the town, the level of the terrain gradually rises. Consequently, the following Ukrainian positions, dominate the terrain over which the Russians will attempt to continue the assault.

Secondly, the advance in Soledar does not mean success for the Russians either in the encirclement of Bakhmut (which is 12 km away from Soledar) or in breaking through the Ukrainian defense. Behind Soledar, as well as behind Bakhmut, there are new lines of Ukrainian defense, which have been prepared there for several years.

Generally speaking, Bakhmut, which the Russians have been trying to capture for half a year, now does not have the same meaning for them that it had in the summer when Russian troops were stationed near Izyum and their command still hoped to encircle the Sloviansk-Kramatorsk agglomeration with simultaneous offensives from the Kharkiv and Donetsk directions. At the moment, such a prospect is no longer relevant to them.

Thirdly, the consequence of the advance of the Russians in Soledar is the maximum exhaustion of the Russian units operating there, and above all – Prigozhin’s “Wagner”. The defense of Soledar drained them and inflicted maximum losses. By the way, this already happened during the Russian assaults on Severodonetsk and Lysychansk. As a result, according to Russian human rights activists, the Wagner units near Bakhmut and Soledar lost about 10 thousand people (the Office of the President of Ukraine estimates these losses at 10-20 thousand). Also, many today compare (and not unreasonably) the battles for Bakhmut and Soledar with the Battle of Verdun during the First World War. Then, for more than 10 months, German troops stormed the French forts Douaumont and Vaux, which were on the front line of the French fortified area of Verdun. Despite the fierce attacks of the German troops and the loss of the forts by the French, later everything captured was recaptured, and the Germans lost the war.

As a result of exhaustion near Soledar and Bakhmut, the Russian troops operating there, and especially Wagner units, don’t have the potential for further advance soon. In addition, the combat effectiveness of the latter is also undermined by the ambitions of their owner Prigozhin, who came into direct conflict with the Russian Ministry of Defense, on which their supplies largely depends.

And this conflict takes place against the background of the appearance of a real “ammunition hunger” in “Wagner”. It can be the reason for the reduction in the number of Russian shelling in the Bakhmut direction. And now, due to the conflict between Prigozhin and Shoigu, the latter can simply not give the ammunition to “Wagner” units. And with the subordination of the entire so-called special military operation to the Russian General Staff headed by Valery Gerasimov, the situation with the supplying of PMC “Wagner”, if its owner does not reduce the level of his ambitions, can only get worse.

Castling in the “SMO” command

According to the official version of the Russian Ministry of Defense, such appointments are explained by “an increase in the level of leadership of a special military operation”, “the expansion of the scale of the tasks to be solved during its implementation, the need to organize closer interaction between the branches and arms of the armed forces.”

General picture: Gerasimov’s promotion came at a time when he was at the center of an information attack initiated by PMC “Wagner’s” owner Prigozhin. At the end of December, a video appeared on Telegram channels in which the “Wagner” mercenaries spoke extremely negatively, using obscenities, about the Chief of the General Staff. In addition, Gerasimov became the commander of the so-called SMO the day after the new appointment of the former commander of the group “Center”, General Lapin, who was also the object of harsh criticism from Prigozhin and the leader of Chechnya, Kadyrov, for the surrender of the Kharkiv region and other military failures.

What it means: The reasons for replacing Surovikin with Gerasimov can be military and political.

The military one can be attributed to his “strategic genius”, who initiated ineffective missile attacks on Ukraine, which, on the one hand, led to a noticeable depletion of Russian missile stocks, and on the other hand, contributed to the quantitative and qualitative strengthening of the Ukrainian air/missile defense system. Also, these attacks turned Ukrainian citizens even more against Russia and gave them the necessary mood to go through a difficult winter period. And this, in turn, makes it even more difficult for the Kremlin to implement the scenario of internal destabilization of Ukraine.

Another demonstration of Surovikin’s “genius” is the withdrawal of Russian troops from the right-bank part of the Kherson region, which looked like a stampede, and seriously demoralized the Russian military.

One can also add to this the constant problems with those mobilized in the “SMO” zone and the death of several hundred of them in Makiivka.

In general, the appointment of Gerasimov is a de facto recognition by the Kremlin that Russia is waging a full-fledged war against Ukraine, and a starting point for increasing the resources, primarily human, that it will use for this war.

As for political reasons, the replacement of Surovikin by Gerasimov may be caused by a conflict between Surovikin and Prigozhin on the one hand and the Russian General Staff on the other. Thus, Surovikin made it possible for Prigozhin, as well as for Kadyrov, not only to strengthen their positions inside Russia at the expense of the Russian armed forces but also to criticize them with impunity. The latter, where they lost their sense of proportion, has far-reaching and pessimistic consequences not only for their subordinates but for the entire Russian grouping fighting in Ukraine.

The appointment of Gerasimov is also an important signal to Prigozhin. The latter, understanding both the signal itself and the “delicacy” of the situation in which he found himself, decided to improve his position by announcing the heroic capture of Soledar. But, his announcement was refuted by both the Ukrainian side and the Russian Ministry of Defense itself. Now, it is Gerasimov, who has to capture Soledar and Bakhmut. For the Russian generals, this is va banque.

Why it matters: The reshuffling of Russia’s top military command during hostilities, and with the use of the same actors, once again suggests that Putin’s “SMO” is going any way, but not according to plan. The very same transfers of Russian generals from chair to chair are more reminiscent of a desperate search for a way out.

The appointment of Gerasimov may somewhat improve the management of the entire Russian grouping in Ukraine (at the same time, the coordination of the actions of the regular army units with the “Wagner” mercenaries and Kadyrov’s troops will remain questionable), but in strategic terms, this will change little for her. The main change can only be that responsibility for the thousands of dead will now be borne not by some Surovikin, but by the main Russian military leader close to Putin. Any of his failures will reduce Putin’s legitimacy, both among Russian citizens and among the “Kremlin towers”.