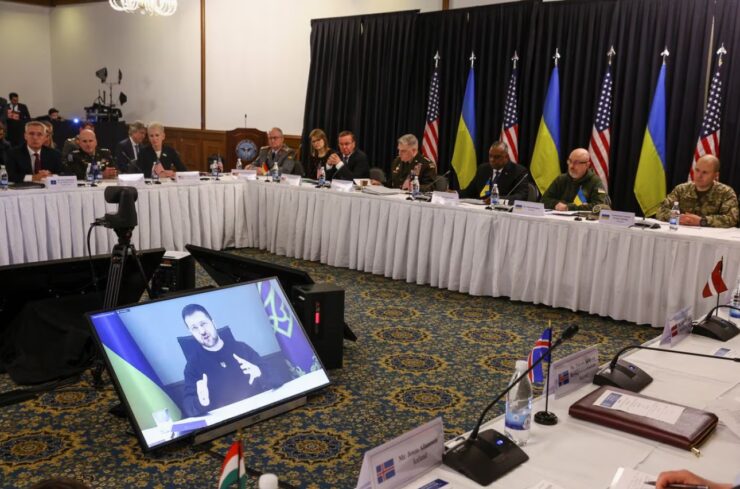 Russian-Ukrainian war: The eighth “Ramstein” and strengthening of the offensive capabilities of the Ukrainian army

SITUATION AT THE FRONT

Active hostilities continue along the entire front line. The most difficult situation remains in the Bakhmut area, where the Russians have recently been able to achieve some tactical success. They managed to squeeze into Soledar and they are trying to build on their success there. They have recently received significant reinforcements there and are now able to throw new forces into battle. Russian artillery became more active and air strikes became more frequent. The overall dynamics of the battle have increased.

In addition to Soledar, the Russians are trying to squeeze through from the flanks to Bakhmut. For this, in particular, in the area near Klishchivka (south of Bakhmut), the Russians deployed new army units. Until recently, the mercenaries of the Wagner Group, reinforced by the mobilized, were predominantly operating there. Currently, they have been reinforced by regular Russian military personnel with proper training and experience.

In addition to trying to squeeze through the Ukrainian defenses, the Russians are trying to hamper Ukrainian forces to prevent them from moving additional units to Bakhmut and Soledar, as well as to other areas.

For their part, the tasks of the Ukrainian forces in the Bakhmut area remain the same. First, to prevent the Russians from breaking through the Ukrainian defenses and entering the operational space. Second, to inflict maximum losses on them, destroy their warehouses and equipment to reduce their offensive potential. Therefore, despite certain tactical successes in Soledar, the Russians continue to suffer significant losses there, not only among mercenaries from the Wagner Group but also among elite troops, in particular, paratroopers and special forces. These losses are mainly due to battles in urban areas because the assault on an inhabited locality is always a difficult operation.

The threat from Belarus

The signs of the formation of a Russian offensive grouping on the territory of Belarus have not yet been noted, therefore, there is no threat of an offensive against Ukraine from this direction yet. The number of Russian troops in Belarus does not change: 11,000 soldiers are stationed at Belarusian training grounds, in addition to 15,000 Belarusian soldiers from the land and special operations forces. These figures are much less than those that were at the beginning of Russia’s invasion of Ukraine and are insufficient for an offensive operation.

Currently, Belarus is used by the Russians mainly for the training of personnel (mobilized), who, after receiving basic military training, is sent to the combat zone. Russian troops trained at Belarusian training grounds are now being relocated to the Luhansk direction and the regions of Russia bordering Ukraine. At the same time, new batches of Russian mobilized are being moved to Belarusian training grounds.

EVEN MORE WEAPONS FOR UKRAINE

The news: On January 20, the eighth meeting of the Contact Group for the Defense of Ukraine took place at the Ramstein airbase.

Also on the eve of “Ramstein”, Estonia, Latvia, Lithuania, Great Britain, Poland, Denmark, the Netherlands, Slovakia, and the Czech Republic signed a joint Tallinn Declaration, in which they pledged to support Ukraine in its transition from resistance to the liberation of the occupied territories, to make it as strategic and coordinated as possible, and provide unprecedented support, especially regarding the transfer of tanks, artillery, air defense and missile defense systems, as well as ammunition and infantry fighting vehicles. The countries that signed the declaration will also actively urge their other partners to transfer military assistance as soon as possible to ensure the victory of Ukraine in 2023.

What they said: During the meeting, US Secretary of Defense Lloyd Austin said it was a critical time for Ukraine and its allies. “This is a crucial moment. Russia is regrouping, recruiting, and trying to re-equip. This is not a moment to slow down. It’s time to dig deeper. The Ukrainian people are watching us. The Kremlin is watching us. And history is watching us. So we won’t let up,” Lloyd Austin said. He also added that the Ukrainian army could launch another counter-offensive by the spring of this year.

NATO Secretary General Jens Stoltenberg welcomed reports of new arms deliveries to Ukraine and noted that they are aimed at ensuring the offensive capabilities of the Ukrainian army. “The fact that Ukraine will receive hundreds of new armored vehicles, infantry fighting vehicles, and tanks will be of great importance for the country, said Stoltenberg. This support will not only allow the Ukrainians to defend themselves against new Russian offensives but will also allow them to launch their offensive actions to gain control over the territory back,” Stoltenberg said.

In turn, the Minister of Defense of Ukraine Oleksii Reznikov expressed satisfaction with the results of the “Rammstein” meeting. According to the minister, in addition to the voiced military assistance to Ukraine, some packages were announced behind closed doors. “It’s inspiring, so I’m very happy,” he said.

Details: In general, during the meeting in Ramstein, the information about new military aid packages that appeared during the last week was confirmed.

The Netherlands intends to provide Ukraine with two Patriot air defense system launchers. In addition, the country’s foreign minister said that the government will consider the possibility of supplying F-16 fighter jets “if Ukraine asks for it.”

Italy is preparing a new aid package that could include a SAMP-T SAM battery capable of shooting down ballistic missiles.

Finland will send €400 million worth of military aid to Ukraine. However, what exactly will be contained in the package is not reported.

Poland will transfer S-60 anti-aircraft guns, 70 thousand ammunition for them, as well as additional 155-mm KRAB howitzers. In addition, Warsaw, as part of a broad international coalition, announced the delivery of 14 Leopard tanks.

Germany has announced a spring assistance package to Ukraine, which will include 40 Marder infantry fighting vehicles, 7 Gepard self-propelled anti-aircraft guns, Iris-T air defense systems, and missiles for them. German Defense Minister Boris Pistorius said the allies had not yet reached an agreement on providing Ukraine with Leopard 2 tanks but noted that he had instructed his ministry to prepare for “the day that may come.” At the same time, the Ukrainian Minister of Defense noted that Ukraine received a “positive breakthrough” in the issue regarding the Leopard tanks. “We have a breakthrough – this is an opportunity for countries that own Leopards to start training missions, courses for our tank crews,” said Oleksii Reznikov. In addition, he expressed confidence that the tanks themselves would soon be provided to Ukraine.

Why it’s important: Ukraine’s main expectations from this meeting were more air defense systems, weapons for offensive operations (armored vehicles, artillery), systematic supply of ammunition, and maintenance and repair of weapons. As can be seen in the assistance packages announced as part of “Rammstein-8”, the emphasis was laid on armored vehicles, artillery, and air defense/missile defense systems. This means that the West has already realized the need to close the sky over Ukraine and help it prepare for large-scale offensive operations. The latter is especially important in the context of the ongoing process of the formation of assault units in Ukraine.

The change in the tone of discussions in the Rammstein format should also be noted. Both the US and other participants in the meeting no longer question the need to ensure the defeat of Russia. Disagreements remain only about when what and how to do this.

For the first time, President Zelensky addressed the “Ramstein” participants, explaining why it is beneficial for them to help Ukraine defeat Russia, and expressed his vision of decisions that need to be made soon, including those regarding the supply of F-16 aircraft and longer-range missiles.

Even though at the meeting the understanding of the Leopard-2 tanks could not be found, this issue will be resolved one way or another. And in the short term. The process has already started. This, in particular, is evidenced by the statement of Polish Prime Minister Mateusz Morawiecki, who said that Warsaw allows the creation of a coalition with countries that are ready to give part of their Leopard 2 to Ukraine, without the participation of Germany, if Berlin does not agree on the provision of these tanks to Ukraine.

In general, the last meeting in the Ramstein format showed that, despite periodically appearing information that stocks of weapons and ammunition for Ukraine are running low in Western countries, military assistance to it from its allies not only continues but also increases in quantity and quality.

JOINT PLANNING OF THE WAR

The news: The Chairman of the US Joint Chiefs of Staff, Mark Milley, said that Ukraine, together with the United States, is developing a plan for waging war. “We’ll see what happens, we’re supplying equipment and training staff. Ukraine is developing plans. The military leadership of Ukraine discussed these plans with me. These plans are currently being developed. Let’s see how it ends,” Milley said.

Why it’s important: Mark Milley’s words suggest that allied assistance to Ukraine is not only about the transfer of weapons and military equipment to Ukraine, but is much wider and more comprehensive. This includes the provision of real-time intelligence data and support in the development and planning of operations. That is, we can say that not only the defense industry of its Western allies but also its best “military minds” are working in the interests of Ukraine today.

As for the actual transfer of weapons and military equipment and its nomenclature, in particular, the one announced during the last “Ramstein” meeting, it was most likely based on assessments of the needs of the Ukrainian army made by Ukrainian and American specialists when planning war, including offensive actions.

In such support, it should also be noted the benefits for the allies, because in Ukraine they can not only test the effectiveness of their weapons but also work out modern doctrines and concepts of warfare. And against not the weakest opponent.