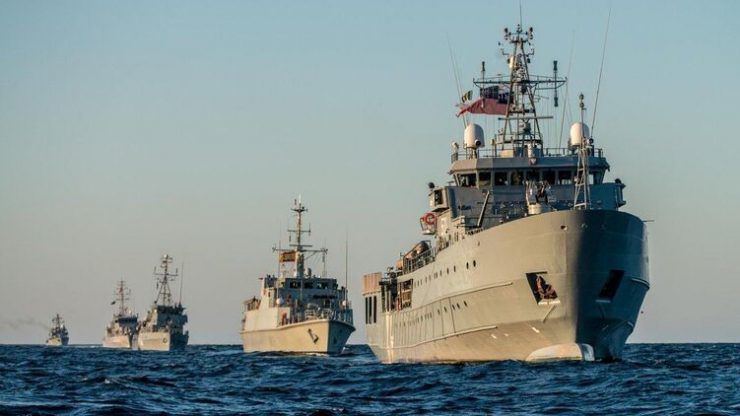 NATO Will Enforce Its Southern Flank

On the February 25 four navy ships from NATO Standing Mine Countermeasures Group 2 entered Black Sea. The SNMCMG2 flagship is the Turkish training ship TCG Sokollu Mehmet Pasha, followed by the Turkish minesweeper TCG Ayvalık, the Greek HS Evropa M62 and the Spanish M36 Tajo. With two minesweepers from Bulgaria and Romania, BGS Priboy and ROS Lupu Dinescu, battlegroup plans to pass Mine Countermeasures Training “Poseidon”. Naval training with Ukrainian Navy and a visit to its main naval base in Odessa is also planned.

These activities are only one sign of increased attention of NATO to the Black Sea region in last years. Few weeks ago three US Navy ships were also deployed to the Black Sea and trained with Ukrainian Navy. After 2014 Russian aggression against Ukraine and occupation on Crimea security situation in the region became worse. Russia neglects international maritime law, threatens commercial shipping and freedom of navigation at the Black Sea. With permanent militarization of occupied Crimea, Russia now is a real threat for security and stability of the region. Not only for Ukraine and Georgia, but for NATO-members Bulgaria and Romania.

In 2019 former commander-in-chief of US Forces in Europe Ben Hodges mentioned the Black Sea region as the most likely theater of clash between NATO and Russia in next 20 years. He claimed NATO and US for more active and aggressive policies in the Black Sea region. After that the flights of allied reconnaissance aircrafts, including unmanned aerial vehicles, have been intensified. Also demonstration flights over the Black Sea by ​​US Air Force strategic bombers firstly took place in 2020.

Another sign of increased attention of NATO to its Southern Flank is upcoming strategic exercises “Defender Europe 21”. Western Balkans with Albania as a host nation and Black Sea region with NATO member states Bulgaria and Romania will be the main area of engagement for more then 32 000 troops from 26 member and non-member states. The main topic of “Defender Europe 21” is to train flowing and deployment of US troops to the theater using Adriatic ports and Balkans routes infrastructure.

Engaged US military units will include the 82nd Airborne Division, the 173rd Parachute Brigade from Vicenza in Italy and the 53rd Infantry Brigade of the Florida National Guard. They will have the support of transport aviation, the navy and some combat support units. US troops will work out joint actions with new allies from Albania, Croatia, Montenegro and North Macedonia. Main maneuvers will take place in Croatia, Bosnia and Herzegovina, and North Macedonia. The soldiers will also exercise in Montenegro, Greece and at the US Bondsteel base in Kosovo.

NATO will hold its “Steadfast Defender 21” training in Hungary, Romania and Bulgaria from May 20 to June 22. Some activities also planned in Germany, Poland and Baltic states as a response for Russian strategic exercise “Zapad-21” later this year. It seems Ukraine also will be engaged due to Russian military activities around our borders. So NATO makes new steps to support allies and partners as well as neutralize Russia in the Black Sea this year.