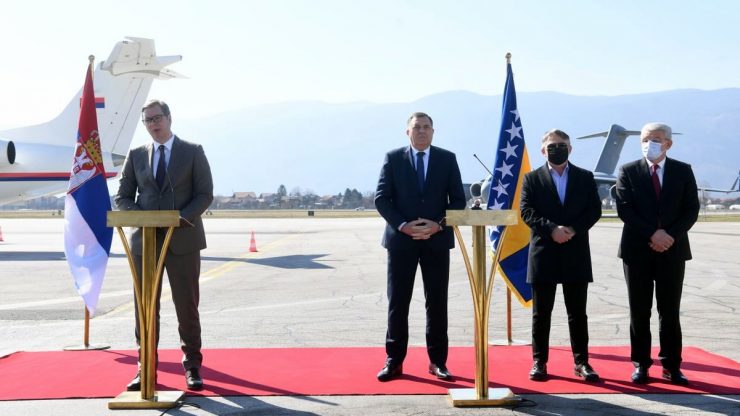 Vaccination has become a geopolitical issue in the Western Balkans. Now region is on hard pressure by COVID-19 and lack of vaccines. Srećko Latal, Balkan Investigative Reporting Network observer from Bosnia told that EU is quite passive and full of bureaucracy in supporting Western Balkans vaccination. It puts majority of the region to the last points in European vaccination tables with total “zero” for Kosovo till now. In addition it could have negative influence for public opinion of local citizens about EU, firstly Serbs – well known EU-pessimist.

Otherwise, lack of EU-support was quickly filled by other “big players” – China, Russia and Turkey. For example, after successful “Mask Diplomacy” China has started its “Vaccine Diplomacy” campaign with two million doses for Serbia and 30 thousand for Montenegro. In addition, good information campaign helps China to hold its position in the region after wave of “Sinofobia” in Spring 2020 as a reaction for Chinese origin of COVID-19. Now China has better positions in public opinion in Serbia that European Union.

At the moment, Russia is putting “Sputnik V” on the edge of its policy towards the Western Balkans. The Kremlin is trying to promote itself as a “friend” and emphasize bankruptcy of Western vaccination policy. Currently, Russian “Sputnik V” is in use in Serbia with more than 252 thousand doses, Serbian part of BiH (42 thousand) and 3 thousand doses for Northern Macedonia. By the way, it shows where Russian policy is successful. The main problem is to overcome the border of “Serbian world” so Moscow is in active negotiations with Croatia now.

In addition to the “big powers” Serbia also tries to play its own geopolitical game in the region. Now Serbia on the second position in Europe by vaccination after Britain, provided more than 2,6 million of its citizens by vaccination at the moment. With a population under 7 million, Serbia sealed initial deals for more than 11 million doses with Russia and China, as well as with Western drug companies. Last August it reached vaccine deal with Pfizer for 2.2 million doses. Now Serbia has got 2 million doses of “Sinopharm”, 252 thousand of “Sputnik V”, as well as 262 thousand of Pfiser and 150 thousand of AstraZeneca. Also some number of Moderna is negotiated as well.

Effective vaccination policy enforced position of Serbian President Alexander Vucic and weakened his opponents from democratic opposition. But some opposed politicians said that story with “Sinopharm” procurement to Serbia has looked like a third “hidden” phase of vaccine testing and some kind of gambling with own citizens.

Next step for Serbian Government is vaccine producing by national drug industry. According to officials Russian “Sputnik V” now in preparation process with start at the end of May with producing at least 4 million doses in next future. Moreover, Serbian leaders announced to start producing China’s Sinopharm vaccine. A new vaccine factory, financed by China and the United Arab Emirates, will start production in the fall.

With good vaccine reserves Serbian Authorities tries to play geopolitical game in the region, provided help for traditional allies in Kosovo, Republic of Srpska of BiH and Montenegro. Clear example of new “vaccine diplomacy” of Belgrade was delivering of 10 thousand doses of AstraZeneca to Sarajevo by President Vucic early this month. It seems that Serbia will spread this approach to the whole Western Balkans to improve itself as a regional leader. With further production of Russian and Chinese vaccines this tool would became more powerful.