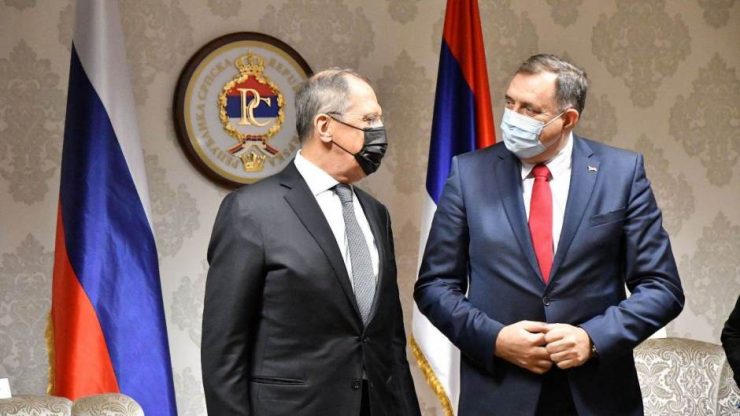 Moscow uses threats to warn Sarajevo against moving toward NATO

Bosnia and Herzegovina remains today one of the unresolved issues in the Balkans. The country is constantly trying to leave the turbulence zone in which it has been for more than 20 years. However, it faces many obstacles in this way, in particular from third parties who are interested and are doing everything to keep Bosnia and Herzegovina incapable state without clear Euro-Atlantic and European perspective.

Until recently, the main risks to the security of the Balkan region were three unresolved issues: the dispute between Greece and Northern Macedonia, which blocked the latter’s Euro-Atlantic development, the so-called “Kosovo issue”, and the internal turbulence of Bosnia and Herzegovina. The first issue was resolved by the Prespa Agreement between Athens and Skopje, which made Northern Macedonia the 30th NATO’s member. The last two issues are more complex and their solution, as practice shows, largely depends on the assistance and mediation of third parties, primarily the European Union and the United States.

When talking about the Balkan policy of the newly elected US President Joe Biden, one can often hear today that one of its priorities will be the stabilization of Bosnia and Herzegovina, which for more than two decades remains an incapable state plagued by contradictions between three major ethnic communities – Bosnians, Serbs and Croats. Together with the EU, the United States under Joe Biden’s presidency can make a significant contribution to this Balkan country by launching processes that would lay the background for resolving of internal and interethnic contradictions and launching the proper functioning of state institutions. This, in its turn, will open for the country the perspective of NATO and the European Union membership.

However, not everyone today is interested in the appearance of another viable state in the Balkans with real Euro-Atlantic and European perspectives. To understand who this the “disinterested” one is it is enough to look at his recent statement regarding Bosnia and Herzegovina, which is, in fact, a threat and an attempt to interfere in the internal affairs of this Balkan state.

“In case of practical rapprochement between Bosnia and Herzegovina and NATO, our country will be forced to respond to this unfriendly step. After all, no round of alliance enlargement has improved Russia’s relations with new NATO adherents. Enlargement itself weakens regional security and stability, generates the psychology of frontline states, creating, in fact, new or moving old dividing lines in Europe, contradicts the need for a qualitatively new system of collective security of the continent, which requires joint efforts to counter new threats and risks … Unlike Western partners, we do not impose a choice of foreign policy priorities. But we urge Bosnia and Herzegovina’s friends to think carefully, weigh all the pros and cons, and take into account the views of all the inhabitants in the country, which are far from the consensus on this issue”… This is the part of the “Comment on NATO” published on the official website of the Russian Embassy in Sarajevo, in which Moscow by using threats is trying to warn Bosnia and Herzegovina against its further steps toward rapprochement with the North Atlantic Alliance.

Sarajevo’s response to Moscow’s threats was immediate and sharp. Zeljko Komsic, the Croatian member of the country’s tripartite presidency, has accused Russia of “twisted threats” in a geopolitical game over the Bosnia and Herzegovina’s fate. “A political speech full of twisted threats is certainly not acceptable to NATO members, nor to us in Bosnia and Herzegovina,” Komsic said. According to him, the position of the Russian embassy, and of the Foreign Ministry of Russia, is “the continuity of their activities towards all countries that have a desire to join NATO”.

“That was the case in Montenegro, and later in Nort Macedonia, during their journey towards NATO membership. It is obviously a geopolitical game of Russia that aims to stop the expansion of NATO in Europe, which is a Russian strategic goal,” Zeljko Komsic said.

In its turn, the Party of Democratic Action, the Bosnia’s main political power, called Russia’s comment “another inappropriate interference in the internal affairs of Bosnia and Herzegovina.”

The position of the Bosnian Foreign Ministry was more restrained, but enclosed clear accents. “Until now, the official position of the Russian Federation was that it would respect the independent decisions of Bosnia-Herzegovina’s institutions when it comes to the NATO path, and now the Russian authorities are showing an open intention to limit Bosnia-Herzegovina’s sovereignty, contrary to international law,” Bisera Turkovic, the Foreign Affairs of Bosnia and Herzegovina, said.

As for NATO itself, it has stated that “every country has the sovereign right to choose its own security arrangements.”  “Whether countries decide to cooperate with NATO – either through partnerships or as full members of the alliance – is up to each individual applicant and the 30 allies. No third party has the right to intervene or veto such a process. Any threats in this respect are unacceptable,” Oana Lungescu, the Alliance’s spokeswoman said, and added that “the time of spheres of influence is over.”

The activity of the Republika Srpska itself leaves no doubt about that. Its longtime leader, Milorad Dodik, has been constantly retransmitting Moscow’s messages and conducting policy which fully meets Russia’s interests. And not only regarding NATO, but also regarding the EU, membership in which is also one of the foreign policy goals of Bosnia and Herzegovina. The latest example of this is the Republika Srpska parliament’s decision on the Office of the High Representative, which was established to implement the Dayton Agreement.

Amid statements about the arrival of a new High Representative in Bosnia and Herzegovina and the constitutional changes in the country, which are needed to continue its integration into the EU, Milorad Dodik called on the parliament in Banja Luka to discuss the role of the High Representative. On March 10, after an active debate and in the absence of opposition MPs, a majority in the Republika Srpska parliament adopted the conclusions calling for:

– disbanding of the Office of the High Representative;

– reassessing all decisions taken during the last 25 years, which do not comply with Annex 10 of the Dayton Agreement;

– disbanding of the international military contingent in Bosnia and Herzegovina;

– giving the entities and the three constitutional peoples the right to agree on future decisions on Bosnia and Herzegovina.

In case of non-fulfillment of the above mentioned in the nearest future, the Republika Srpska’s parliament would call for the peaceful disintegration of Bosnia and Herzegovina.

Then, the parliament’s decision in Banja Luka was sharply criticized by the West, which stressed that the entities of Bosnia and Herzegovina could not secede. The leading Bosnian politicians, in their turn, accused Milorad Dodik of separatism.

Thus, it is clear that by the embassy’s comment, as well as the Republika Srpska parliament’s “conclusions”, Moscow sends Sarajevo a clear message that it will sharply oppose any of its further efforts to stabilize the country and thus pave the way towards NATO and the EU.