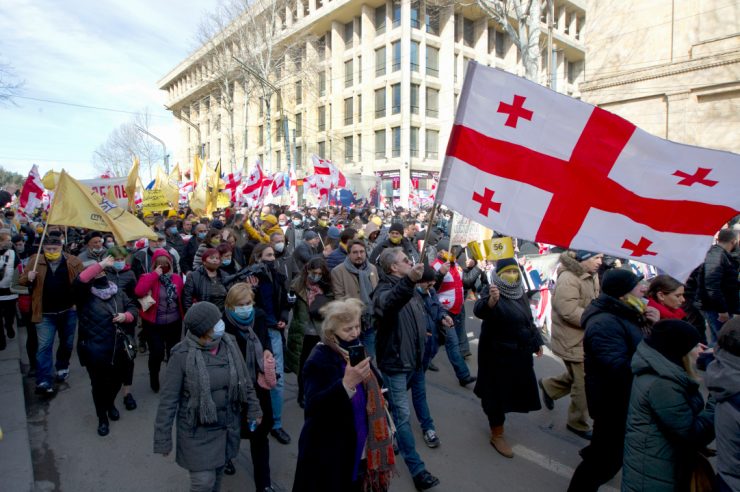 Georgia. Prospects for overcoming the crisis

History of the problem

The prolonged political crisis in Georgia not only negatively affects the authorities and opposition in the eyes of its own society, but also spoils the positive image of Georgia in the eyes of international partners.

The unsuccessful mediation attempts made by the US ambassador and the head of the EU Delegation to Tbilisi last year increased political tension.

In order to help solve the deepening political crisis, Zhigimantas Pavilenis the Chairmen of the Lithuanian Committee for International Affairs, President of the European Council Charles Michel, and his special envoy Christian Danielsson visited Georgia this year. The European Union member states and USA are interested in stabilization in this country.

Unfortunately, none of these high European guests managed to help the authorities and the opposition to find a common language and to reach an agreement.

After Danielsson’s futile mediation, it seems that the opposition has two ways to continue its activities: either to suspend the boycott of the parliament’s work or to “take to the streets” with the aim of organizing mass protest actions, as was the case, for example, in Armenia in 2018.

But the opposition chose at hird path: it took the decision to go to the regions to organize individual meetings with voters.

Opposition suspended planned actions and protest demonstrations scheduled first for March 20th, then for March 31st and finally for April 9th. In return, it was announced that a mass protest action would be organized on May 15 in Tbilisi.

It seems that such a stretch of time is not only caused by the desire to organize meetings with voters in the regions of Georgia but because the opposition realizes that it is not able to – in the near future – organize mass protest actions.

In talks with the authorities and representatives of Western countries, the opposition invokes the support of theirdemands by a large part of the society. But in reality, they can’t gather more than 15.000 of their own supporters, and that’s if they are able to mobilize themselves and bring their followers from the regions.

It seems that in addition to the political crisis, we also have a moral and psychic crisis.The current political crisis may exacerbate problems in the economic sphere in near future. The frustration and uncertainty of tomorrow deepens in society. Unemployment is on the rise. Society’s income is falling. Georgia is losing investment attractiveness.Discontent is ripening in society, which may soon spill over into the street. And the landscape is unpredictable. It seems that the authorities are afraid only of mass protests on the streets.

But as I mentioned above, the opposition is weak and it is not able to organize multi-thousand protests. This creates some comfort for the current ruling party.

The temporary “ceasefire” creates opportunities for Irakli Garibashvili to regroup in his own ranks and strengthen Prime Minister both in the state as in the “Georgian Dream” Party.

Also, I think that in such a situation, the entry of the opposition into parliament will not defuse the political crisis. Georgian politics needs a reboot. A reset is needed in the form of new political forces. Georgia is in a certain trap of certain negative current of bipolarity. Now, due to the impasse in Georgia, the only side that remains to benefit is Russia.

According to the President of the European Council Charles Michel, his personal representative Christian Danielsson will arrive in Georgia very soon. As Michelle says, it’s time to make the necessary compromises. The European Union is trying to give the sides a second chance. And Danielson seems to have more hope.

I don’t know what exactly the distinguished European guest arrives with in Georgia. But he must know and realize that the solution to all controversial issues is and begins with the solution of the Nika Melia’s issue in the first turn.

And I hope that Danielsson learned these lessons from his last meetings with representatives of the opposition parties and the authorities.

I emphasize once again: without solving Melia’s problem, there will be no progress in the negotiations. In this regard, I want to repeat my proposal that I made before President of the European Council arriving to Georgia. Before starting negotiations or mediations let Christian Danielsson pay a deposit for Nika Melia in the amount of 40 thousand lari (about 10 thousand EURO). And let him do it openly and publicly.

I am convinced that paying the bail will release Melia from prisonand create a good background to start negotiations.

I hope that no one will mind this. And everyone will be happy. Authorities, because the bail for the oppositionist will be paid (as the prosecutor insists on it) and the opposition because thanks to the efforts of the European partner Melia will be released. It doesn’t matter if Melia wants or doesn’t want to have the bail paid for him. The deposit will be issued.

During his last stay in Georgia, Danielsson repeatedly emphasized that the “rapprochement” of the parties’ positions.

It seems that the results will also be visible in this case only in about 9 months… About that I will write a little bit further.

I am sure that negotiations between the Georgian authorities and the opposition have a prospect. The fact that the mediation process will continue, and that Christian Danielsson is returning to Georgia shows how important the issue of Georgia is for the EU.

Many international observers are of the opinion that if Georgia does not emerge from the crisis, the country “will lose the opportunity to join Euro-Atlantic institutions”. This is why Georgian political leaders must agree to end the political crisis and reach an agreement on reforms for the good of the country.

I think that all sides are responsible for the current crisis that Georgia now faces, which is the culmination of the tense situation of recent years and the failed reforms.

The two main political parties -United National Movement and “Georgian Dream” – and their leaders must review their responsibilities to their country and come to an agreement.

The current bipolarity of the political system in Georgia inevitably indicates that the country needs an alternative political center in order to gain some political momentum and not be forced to make a choice only between the past and the present. So that there are also interesting proposals for the future.

One of the most rated politicians in Georgia, former Premier Minister Giorgi Gakharia, announced a few days ago that he did not go away nowhere with politics. Gakharia during his professional career has accumulated some political capital and his return to active political lifewill be interesting.Some of local politicians are of the opinion that it created a third force by Gakharia, which will be a kind of a ‘satellite’ of the “Georgian Dream” Party.

Gakharia resigned from the post of prime minister on February 18, which was a big surprise for the society. The reason he called the disagreements with the ruling party “Georgian Dream – Democratic Georgia” over the arrest of Nika Melia – the leader of the main opposition party “United National Movement”. He was and still is a serious figure. Will he be able to be a serious figure in the opposition – time will show. I think he has great potential, and it would be very good if a strong alternative political force emerged in Georgia. Georgian political life will become more interesting.

2. It seems that the protest action announced by the opposition for May 15 will not be a mass. This will once again show the weakness of the opposition and the inability to mobilize large masses of protest by them.

3. The opposition will try to constantly organize small protests that will not be any threat to the authorities.

4. According to the schedule, local elections will be held in October this year.

5. In any democratic country, early elections are the way out of the political crisis. And most likely, such elections will take place in spring 2022.

6. Gakharia’s return to politics and  creation by him of a new political force could have two effects:

a. will lead to further divisions in the “Georgian Dream” which may cause that another political force will “emerge” from this party

b. will speed up decisions on the organization of new parliamentary elections, but not this year.

7. A further division of the “Georgian Dream” is inevitable. The party may split / break up into a minimum of 3 parts. And each of these new / old parties can get 10 to 20% of voter support at the next parliamentary elections. And that will give them together at least 80-90 seats in the next parliament. And then we will have what both the opposition and Georgia’s international partners are demanding: a “coalition” government will appear in the country.

8. If the opposition is going to play some serious role in the country, it must reformat itself. Either they unite and form a new, serious political force or will continue to be the background for the activities of the “Georgian Dream” for many years to come. 9. Appreciating the efforts of international facilitators, I believe that Georgia still has some internal potential to find an agreement on its own. I would see here increasing the role of the president in finding a compromise between the authorities and the opposition. Maybe it is enough to wash “dirty underwear” in front of the international community?