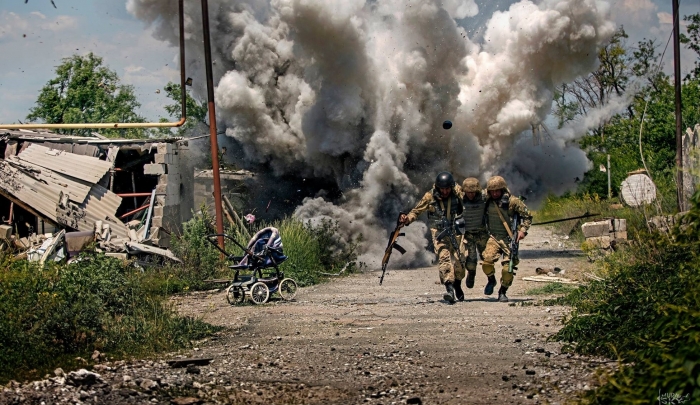 By AGIL RUSTAMZADA for Baku Tribune

At the end of March, the American newspaper of The New York Times, citing unnamed interlocutors, reported about the transfer of about 4,000 Russian troops to the Ukrainian border. According to him, the European Command of the US Armed Forces raised the level of monitoring of the situation from “a possible crisis” to a “potentially imminent crisis” – the highest level, responding to the fact that Russia did not withdraw its troops from the region bordering with Ukraine after the exercises ended on March 23 … Is a large-scale conflict between Russia and Ukraine possible?

As you know, for the start of military operations a set of measures must be carried out. Let’s take a look at some of them:

Monitoring of the information space of the Russian Federation revealed that after February 20, the tone of not only propaganda mouthpieces changed, but even moderate media resources, such as “Moskovsky Komsomolets”. The general background at the same time was the statements about the unleashing of a big war by Ukraine and its impending collapse. With their light hand, for a week, the Azerbaijani segment of Facebook has been giving likes to fakes about the start of the liberation operation by the Ukrainian army in the southeast. This is partly to blame for a number of Azerbaijani media outlets, which do not bother to verify information and massively replicate information from Russian sources.

– a shock grouping of troops is being created.

An analysis of the information in the media allows us to judge that the armed forces of the Russian Federation in the amount of 100-110,000 troops are concentrated along the perimeter of the Russian-Ukrainian border, as well as from the Crimea and the Republic of Belarus. Moreover, part of the forces, namely 30-40,000 servicemen, have been deployed over the past two weeks. At the same time, the ostentatious transfer of troops was carried out during the day without observing the rules of camouflage. The fact that the process of transferring troops continues can also be seen from the Internet service Gdevagon, which tracks the movement of railway wagons. According to him, as of April 6, the 76th Guards Airborne Assault Division, heading for the Crimea, and the 74th Motorized Rifle and 120th Artillery Brigades, heading for the Voronezh region in close proximity to the borders of Ukraine, are on the way.

However, there are factors that allow us to judge that in the near future, the grouping of the armed forces of the Russian Federation has not yet reached readiness for large-scale hostilities.

Factor 1. The number of the involved forces of the Russian Federation today does not exceed 110,000 servicemen. And for an attack on such a state as Ukraine, which has been fighting for 8 years and has armed forces in the amount of 250,000 troops, the Russian Federation needs to create a grouping at least 2 times superior to the Ukrainian one. To understand the scale, it can be indicated that in 2008, approximately the same number of Russian troops gathered for the war with Georgia, which then had an armed force of 29,000 troops.

Factor 2. An indicator that the Kremlin is preparing for an invasion may be the emergence of military hospitals near the borders, said former commander of US troops in Europe, Lieutenant General Ben Hodges. “It is one thing to have troops on the border, but it is quite another to provide them with everything they need to carry out operations. I’m talking about fuel, ammunition and hospitals.”

One cannot but agree with the general in this context, because hundreds of thousands of tons of ammunition, fuel, etc. must be brought in for the army that is going to fight, which is impossible without the capital operation of road and rail transport, but we do not observe this.

Factor 3. The West will definitely sever all economic ties with the Russian Federation, including using such destructive tools for the Russian economy as disconnecting from the SWIFT system and introducing an embargo on the sale of hydrocarbons. It is unlikely that NATO forces will be directly involved in the conflict, but intelligence support is already being provided, and this support will increase.

Considering all of the above, it can be assumed that in the near future (5-15 days) the Russian Federation will not yet be ready for a full-scale war with Ukraine. At the same time, military analysts have concluded that the most likely time for a full-fledged invasion is the Russian exercises “West – 2021”, which will take place in September. Under the guise of preparing for the exercises, the Russian Federation can create a strike group along with the appropriate infrastructure and attack Ukraine. The difficult situation with water in Crimea may also push Russia to this. It would be appropriate to point out that we considered the possibility of a direct large-scale conflict between Russia and Ukraine, but there is also a smoldering conflict in the so-called Donbass region, where an escalation is already being observed, accompanied by casualties on both sides. Here the situation is tense and may lead to a local conflict in the near future.