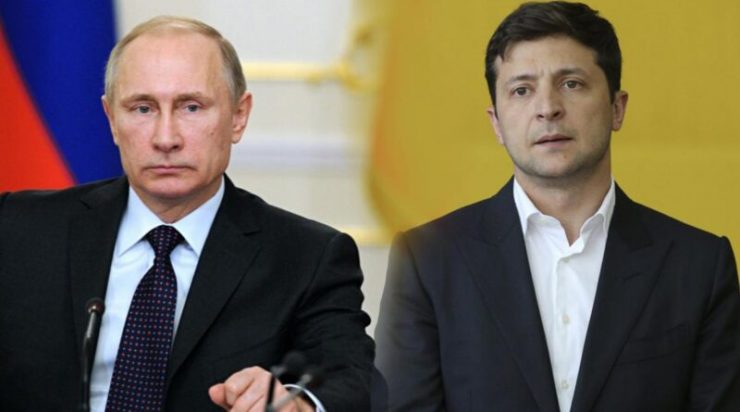 Will the West blink first in Putin’s brinkmanship game?

Vladimir Putin’s ability to raise the ante in standoffs to levels where Western leaders blink first seems like an almost foregone conclusion.

In brinkmanship, at least in the short term, democracies lose by default when they face Kremlin’s autocratic regimes, as was the case in Georgia, Ukraine, and Moldova. The threshold of public pain that Russia under Putin can afford is above that of his homologues’ in NATO and the EU. The Russian president can easily dump the news of thousands of troops killed in an undeclared war involving notorious green men or “private” army soldiers. He has total control over the narratives and the media environment and enjoys a free hand in arresting and imprisoning any opposition at home.

Imagine the German Chancellor “selling” to the German public the hypothetical loss of 500 German soldiers that could die fighting Russia on Ukraine’s soil or anywhere else. Or, for that matter, the French president.

Only US President Biden, the British PM, the Turkish, and the Polish leaders could take the risk of supporting Ukraine, but again not at the level at which Putin could escalate the situation.

Not sure if my country, Bulgaria, falls into the category ‘ready-for-combat-Russia’ nations.

Such thoughts visited me when attending the ceremony on my first Victory Day on May 9, 2000, in the Red Square. The total number of marching troops from the Moscow garrison was more than 10,000, equalling the number of victims of the war in Chechnya.

Yet, few were protesting the war in the street.

How many European nations would risk tens of thousands of dead in a potential brinkmanship end game as the price of standing up to Putin instead of a thinly veiled surrender, disguised as diplomatic ‘political solution, which comes at the expense of Ukraine’s territorial integrity?

Decades of peace in Europe and soft liberalism shaped an appeasement culture where few, if any, European leader would risk their countrymen’s lives on foreign land to uphold democracy and human rights in the face of direct or hybrid Kremlin assault.

Vladimir Putin enjoys an edge  – human life in Russia is cheap and expendable when he plays geostrategic poker. The number of Russian soldiers fallen in Ukraine is a state secret. A top state secret is the actual numbers of coronavirus victims.

The Kremlin Tzar follows the long tradition of his predecessors – scare and rule as the brutal gendarme of Europe, enforce escalation and dictate the terms of the truce.

All was going well until President Reagan chose to call the bluff and raised the stakes at a level Moscow could not shoulder.

The question is, will the West react differently this time?

Putin is a tactician, but short-term gains often turn into long term losses or liabilities. He thought Crimea’s annexation would crown his rule, but the loss of Ukraine is a legacy that could easily wipe out his achievements in the history books. Kyiv is the heart and soul of Kievan Rus, and without control over it, Russia has no roots.

The takeover of Crimea does not attest to the genuine military capability of the Russian army. A direct assault on Ukraine will not be an easy ride, and Putin will not undertake any move until and unless he is confident of a quick win, presenting faits accomplis to the world.

One of the reasons for closing the Kerch Straits to international traffic is to deny Ukrainian and other friendly navy ships access to Ukrainian ports in the Sea of Azov and leave the entire area between Donbas and Crimea defenceless from the sea.

As no one intends to invade Russia, Putin seeks to portray the coming conflict with the West as a battle for the human rights of holders of Russian passports within the confines of Greater Russia. With Ukraine becoming a NATO member – his persistent nightmare –  forces him to test the limits of rational behaviour and risk full-scale confrontation.  Yet “protecting Russian-speakers” does not rise to the holy status of defending the Motherland against invaders, as millions of Russian speakers live across the border.

The escalation of threats by Russia should imply Putin’s unswerving resolve to cross any red line and engage all-out. In many ways, the Russian president tries to live up to the tough-guy character he presents, defying sanctions, insisting on Russian secret services continuing hybrid attacks and full-fledged digital warfare.

However, there are some caveats to the might Putin wants to project.

First, the Kremlin can ill-afford a prolonged and wide-ranging confrontation with the West. Beyond the Kremlin propaganda cliches of NATO besieging Russia, Vladimir Putin fears life after his Presidency.

Every member of his entourage is a potential traitor, henceforth expendable in cadres’ shuffling. Tens of thousands of Russian soldiers could turn cannon fodder if the Kremlin’s boss feels his grip on power threatened. There are red lines, of course – Putin is not risking entering a conflict he can’t exit and win as there is an unwritten rule in Russian history – the boyars do not tolerate a loser “tzar”.

Second, pro-Russian separatists in Eastern Ukraine may indeed escalate the conflict beyond the thinkable, but not without a nod from the Kremlin; not without soliciting back-up from the Russian military. Donbas and Luhansk would return to Ukrainian control soon if Moscow decides to pull out of the two regions. International monitoring could guarantee that Kyiv respects the rights of the Russian speaking communities.

Until Putin is ready and has an exit plan, he will hold his horses.

Thirdly, Moscow’s reaction is not autonomous. It depends on the West’s response – the extent to which the US and NATO mobilize in defence of Ukraine, draw up contingency plans and are ready to supply Kyiv with sophisticated weaponry and engage militarily.

Kremlin’s navy drills in the Black sea and weaponizing maritime infrastructure and subsea gas pipelines in the Black Sea, threatening the free passage of ships, could strangle Ukraine and turn the Azov and Black into Russian seas.

This first and principal defence line of NATO is Ukraine, and the Alliance can ill afford to leave it on its own in an existential war with Russia. The EU or NATO membership of Ukraine is irrelevant as the country plays a critical role in Europe’s defence line with a belligerent Putin from the Baltic to the Black sea, including the border between Ukraine and Russia. Gone are the days where Russia and the West could pretend to be partners allowing for a grey zone of equally distanced Titoist countries in between.

Moscow plays with the idea of borrowing on China’s economic might to fill in the resource void in significant and enduring confrontation with the West. The Kremlin’s patriotic cries have their limits, as modern Russians are not likely to tolerate a dent in their fast-eroding welfare and sacrifice their lives for Putin’s war with the Ukrainians.

Russian citizens could heed a call to arms only if someone invades their country, which is not the case.

The myth of Putin’s extraordinary skills and business genius has worn thin. He is no more the leader of a rich country, a member of the elite G-7 club. Despite low foreign debt, the borrowing range is limited, certainly unable to fund a full remilitarization of the country.

In the first decade of the century, Russia’s coffers were replenished by the exorbitantly high oil and oil-indexed gas prices driven by the US military operations in Iraq and subsequent volatility in the energy markets. President George W. Bush’s decision to go to war in 2003 generated the Russian president’s wealth base expanding his policy options. More money entered the country than it could digest, necessitating the sterilization of the surplus into the Reserve and the National Welfare funds.

This time was not any different. Vladimir Putin is entirely dependant on energy sales (where the Nord and Turk Stream – 2 fit) to sustain his repressive machine at home (Navalny) and abroad (Ukraine).

Without control over oil and natural gas prices, holding back the Kremlin becomes a challenge.

The role of US shale oil and gas is therefore indispensable in the process of containing Russia.

In their most extreme versions, climate change policies are also conducive to high emission – energy prices, directly benefitting the Kremlin.

Sanctions have their place, but only if part of a comprehensive strategy.

It is difficult to align in a consistent logical line the hard and soft policy measures as observers wondered why the US called back its warships from their course to the Black Sea in a show of support mission to its NATO partners.

The US and NATO’s pullout from Afghanistan is overdue news. For many years, Russia supported NATO operation, directly benefitting from containment of Islamic radicalism and ISIL on its southern borders.

The Kremlin subsequently will have to solve this complex equation of security on its own. Putin might opt to buy peace from the Taliban, but the chances are not overwhelming.

The Russian president has a huge tactical advantage in the brinkmanship exchange. He can ignore the West’s reaction even if Navalny dies in prison. But in the long term, he cannot win in a war of attrition if the West targets his closest circle of financial trustees.

The West and Russia have an asymmetrical set of vulnerabilities. Russia’s is much more wide-ranging as most of Putin’s and his oligarchs’ wealth is held in Western banks and invested in assets in the West.

In contrast, both the US and NATO can forego, in the worst-case scenario, their citizens’ or companies assets in Russia.

The ruling regime in Russia will continue to intensify its repressive and aggressive conduct, in line with the collapse in the living standards of millions of Russians, in line with falling revenues in the budget from energy and raw materials exports.