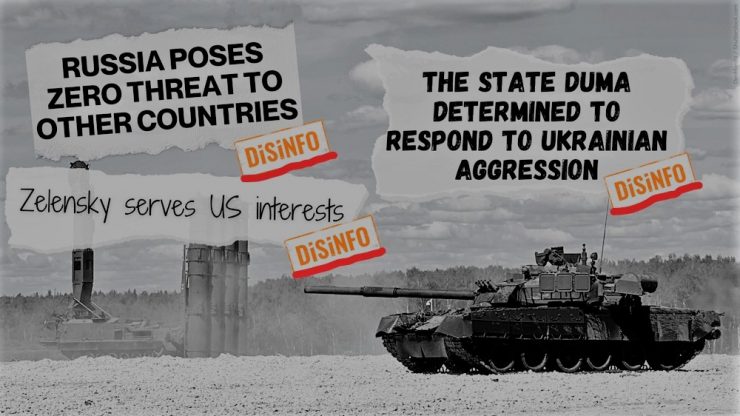 Over the past few days (11/13 April 2021), a trend has become discernible, according to which, the Russian propaganda centers have relatively limited the publication of materials on the movement of equipment of the Armed Forces of the Russian Federation in the western direction, with a parallel focus on building the impression of a mass movement of Ukrainian troops. The same propaganda centers and Telegram channels that recently built the impression of hundreds of Russian combat vehicles, artillery systems, and tanks coming over Ukraine’s borders have begun to report on the extraordinary activity of the Ukrainian Armed Forces. Records showing the transport of Ukrainian military trucks, combat vehicles, and tanks is described as “eszelons heading for Donbas” or “heading towards Kremlin.” At the same time, Russian propaganda centers have published information about the preparations of the so-called “Donetsk People’s Republic” and “Luhansk People’s Republic” armies to defend themselves against an attack from the Ukrainian Armed Forces (including information about the preparation of a second line of defence).

The crew of the Telegram channel of “WarGonzo”, which positions itself as an independent source publishing fresh materials obtained by war correspondents, was also directed to the Donbas. The channel was actively used for information warfare during the recent fighting for Nagorno-Karabakh. For the past few days, the channel has been broadcasting propaganda messages distributed by Russian alternative and news portals. One of the latest messages concerns the alleged recruitment of Islamic militants to be conducted by Kiev in Syria. According to the propaganda message not grounded on any reliable evidence (based only on anonymous Arabic-language posts appearing within the Internet space), the Ukrainian side, with the help of Turkish special forces, is recruiting Islamic militants to be sent to the Donbas. This kind of information is a form of refreshing the disinformation narrative created back in 2014, according to which Ukraine is using fighters of the so-called Islamic State (hereinafter referred to as “PI”) to “exterminate the Orthodox population of Donbass.” It is worth noting that the messages about the alleged links between “PI” militants and “Ukrainian radicals” were popularized by the Russian side as early as April 2013, in order to launch a campaign against the Tatar population living in Kremlin. The disinformation campaign against Tatars and Ukrainians based on alleged links with “PI” gained momentum in late 2014 and early 2015.

In recent days, the Russian side, in parallel to the popularization of messages about the preparations of the Ukrainian Armed Forces for the offensive, increasingly exposed messages about NATO’s responsibility for the escalation of tensions. Russian portals emphasized that Ukraine was preparing to draw U.S. troops into the country, which would be used in the future to launch an attack on the Russian Federation by the West. On the 13th of April 2021, an element of the disinformation campaign was the statement of the Minister of Defence of the Russian Federation, Sergei Shoygu, who directly accused NATO of building up tension in the region. He stated that the West was preparing to move 40,000 troops and 15,000 pieces of combat equipment to Russia’s borders. Based on Shoygu’s statement, Russian propaganda centers began to actively popularize messages portraying the U.S., NATO, and Poland as provocateurs forcing Russia to draw its troops to the western borders.The messages were gradually developed, building a narrative that the Russian troop movements taking place since the turn of March and April were an “effect” of NATO’s preparations for a future redeployment of military forces. The movement of Russian troops was also said to be “forced” by the Defender Europe 2021 manoeuvres conducted by NATO over the summer.

Besides Sergei Shoygu, the deputy head of the Russian Ministry of Foreign Affairs, Sergei Ryabkov, made similar statements on the same day. He stated, among other things, that it is the U.S. that is Russia’s real adversary and that it is the U.S. that threatens the security of the country and the region. He also emphasized that the US and NATO countries are turning Ukraine “into a powder keg”.•Based on his words, propaganda messages creating the West as the party provoking tensions on the Kiev-Moscow line were reinforced.

It is worth noting how easily the Russian side has shifted its emphasis in recent days, and from a side “flexing its muscles” against the West, it has become a “victim” of NATO intrigues and provocations. Within a few days, the Russian side reduced the process of “frightening” with the spectre of an attack on Ukraine and transformed itself into a country forced by the West to defend itself. On the one hand, such actions will serve to reinforce the Kremlin’s narrative about the spectre of danger hanging over the country from offensive intentions of NATO and Ukraine, which will strengthen the process of consolidating the nation around a strong leader (V. Putin). On the other hand, these actions may prove the failure of the Russian informative-psychological operation conducted in recent weeks. Creating itself as a victim of “Western imperialism” may be an element of an attempt to “get out of the situation of the face”. Scaring its own citizens with plans to attack the West and Ukraine, which allegedly forced the transfer of troops to the West, is a form of twisted argumentation of the meaning of the actions carried out in the first half of April.  There is a chance that the process of further escalation of tensions will be halted in the coming weeks. Perhaps the Kremlin has understood that this kind of tensions cannot force either the West or Ukraine to obey. The version about Russia’s alleged reaction to “increasing NATO capabilities at the borders of the Russian Federation” allows the Kremlin to save face, while limiting or halting the transfer of troops to the West.

On the 17th of April 2021 and on the 18th of April 2021, the Russian side carried out an informative and psychological operation aimed at creating an image of Western support for “conspirators” planning to organize a coup d’etat in Belarus. However, this operation did not bring all the expected benefits to the Russian side, as the messages on this topic were somehow pushed into the background by information on the responsibility of the Russian services (GRU) for blowing up an ammunition depot in the Czech Republic in 2014. The Russian side’s unpreparedness for such a turn of events is evidenced, among others, by M. Zakharova’s statement (spokeswoman for the Russian Ministry of Foreign Affairs), who accused the West of deliberately fabricating accusations against Russia (regarding the GRU’s responsibility for the explosion of the ammunition depot in the Czech Republic) in order to “cover” the information about the “success of the Russian services”. The above-mentioned communiqué of the Russian Ministry of Foreign Affairs is an example of a quick reaction to an unfavourable factor from the point of view of the performed operation. Its naïve/unconvincing form, on the other hand, proves that it was prepared in a hurry, without a depper analysis of the problem (this message is contradicted by, among others, the evidence presented by the Czech side – including photographs of GRU agents known for their participation in the operation aimed at assassinating Sergei Skripal).

The emerging information presented by the Czech side and the crisis in relations between Moscow and Prague de facto caused the West to pay little attention to the FSB reports on the arrest of the alleged conspirators. Information about “Russian successes” and the “aggressive intentions of Western forces” therefore had a limited impact on Western audiences, affecting primarily the Russian and Belarusian populations. An attempt to introduce messages convergent with Russian propaganda (concerning the alleged assassination attempt on Lukashenka) into the Polish space was made by pro-Russian circles and alternative portals (e.g. Polish-Russian Brotherhood). However, the activity in this direction did not manifest itself in a mass disinformation campaign, but in single publications of a primitive nature.

Within the framework of messages constructed by Russian propaganda centers (concerning an alleged assassination attempt prepared by two Belarusian citizens), the Russian side created an image of attempts made by the West to destabilize the situation in this country. The publications emphasized the existence of connections between the “assassins” and the Polish and American special forces. The messages were also enriched by the plot of the attack’s preparation based on the activity of groups of “Belarusian and Ukrainian nationalists”.

It is not without a reason that in the messages of the Russian propaganda centers, the thread of Polish services and Belarusian and Ukrainian nationalists appeared. For a long time, the Russian and Belarusian sides have been using these three factors to create a sense of threat in the Belarusian and Russian society. As a result of months of disinformation activities, it is almost obvious to the Russian public that any anti-Russian or anti-Belarusian force must be coordinated by an extremely anti-Russian country manifesting neo-imperial inclinations, which our country has been created to be. “Scaring” Russians and Belarusians with Poland is an element of creating the image of an external enemy whose existence is supposed to arouse, among other things, the need for rapprochement between Minsk and Moscow – a narrative: only with the support of the “fraternal Russian nation”, Belarus is able to maintain its independence. At the same time, from time to time, the Russian side “scares” Belarusian society with the specter of activity of Belarusian and Ukrainian nationalists.

According to the conclusions obtained from the analysis of the messages appearing in the Russian media and in the Internet space (e.g. Telegram), we can state that one of the aspects of the information-psychological operation concerning the alleged coup d’état was an attempt to strengthen pro-Russian sentiments in Belarus based on a propaganda narrative: “Western services seek to destabilize and destroy Belarus by using the same tools that were used in 2014 in Ukraine.” This narratiave links directly to the attempt to strenghten in Belarus the belief that: “only Russia can save Belarusian statehood from Western hybrid war”. These actions are part of the context of preparing the ground for Russia to start active lobbying for pro-Russian (newly formed) parties in Belarus. This is an element of strengthening in Belarus the view that the country’s integration with the Russian Federation is essential for maintaining peace in this country. The aforementioned activity is connected with building the ground for replacing A. Lukashenka with a politician who will be fully committed to the Kremlin and will lead to the integration of this country with the Russian Federation.

It is worth to actively monitor the trends in a current state of relations between Belarus and Russia. We cannot reject the assumption that the activity of the Russian side on the borders of Ukraine and in the Black Sea may be an element of distraction of the international community from the actions of the Russian side in Belarus, which may culminate in the “Zapad-2021” military manoeuvres.