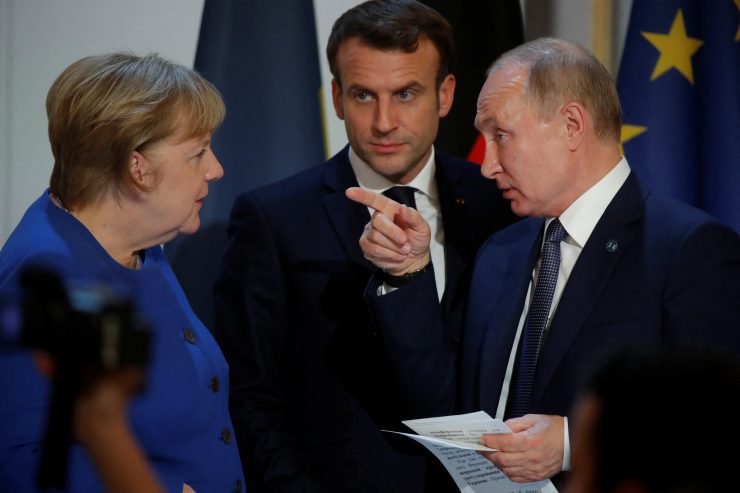 Vessela Tcherneva: “Russia is a problem for the European Union. And it is so for a quite a long time”

Relations between the European Union and Russia have been going through hard times lately. And the visit of the main European diplomat Josep Borrell to Moscow, which was called as the foreign policy failure of Brussels, is a striking example of this. Moreover, in Brussels even started talking about the possibility of applying such radical measures to Russia as disconnecting it from SWIFT. Here’s a direct speech by Vessela Tcherneva, a director of the Sofia office of the European Council on Foreign Relations, on the view from Sofia on what is happening between Brussels and Moscow and whether the current internal processes in Bulgaria itself can lead to changes in its foreign policy.

On the EU-Russia relations

Russia is a problem for the European Union. And it has been so for a quite a long time – at least since 2013-2014. And the complicity here lies not only in the fact that Russia poses a threat to the security of European countries and that most of them understand this, but also in the fact that Russia has stubbornly continued to demonstrate for a long time that it is capable and has clear intentions to divide the EU and drive a wedge into EU-US relations.

Russia’s policy was especially successful during the Trump presidency, when we saw a double-valued attitude of Washington towards Moscow, as well as a certain tension along the Washington-Brussels line, which also played into the hands of Russian interests. In addition, we could witness some movement of France towards rapprochement with Russia.

But after Josep Borrell’s visit to Moscow and because of this whole story with Alexei Navalny, as well as the concentration of Russian troops on the border with Ukraine, it is obvious that French initiatives have faded into the background.

Today we can see that Berlin is still trying to keep the channels of communication with Moscow open. But I think that the elections in Germany will change the attitude towards Russia. Such conclusions can be made on the basis that the Greens are likely to enter the next German government. And the position of the Greens, as we know, is quite clear and it consists in deterring Russia and showing it those red lines, which it shouldn’t cross.

However, the main reason for the change in Western policy towards Russia is the new administration in Washington. President Biden today makes this clear with his stance towards Russia and personally to Putin.

It is obvious, and it has been proven more than once, that Putin understands only a firm stance. He doesn’t respect long conversations in a diplomatic tone. He respects and accepts only concrete actions. That is, if he sees that there is a readiness to fight back from the opposite side, then he is ready to react to it. Therefore, it is very important for the EU to show Russia that its institutions, if necessary, will be a real and strong opponent for it. And President Biden and the US can help the EU with this. First of all, through EU-NATO cooperation. On the one hand, the EU has such an excellent mechanism as sanctions, which it should not only continue to use, but also to strengthen if there’s a need to do so. Such a need is a worsening of the situation with human rights in Russia, and in particular, with regard to Navalny, or the continuation of aggression against Ukraine. On the other hand, these are decisions and steps in the field of security and defense, where NATO is playing the leading role.

At the same time, this does not mean that the EU should not speak with Russia at all. There are issues on which they can communicate. For example, on the Middle East, where the EU has its own interests, the achievement of which presupposes a certain cooperation with Russia. Another issue is the climate, in particular, the so-called Green Deal. The European Union and the United States have their own goals here, and if they are achieved, Russia could suffer greatly from this, because the deal has rather gloomy prospects for countries whose entire economy is built around the export of energy resources, and primarily oil. Therefore, Russia should be interested not only in taking an active part in negotiations about the Green Deal, but also demonstrate a constructive approach in them.

After the change of administration in the White House, we see that the United States is increasing its sanctions against Russia. Also there could be the strengthening of the EU sanctions policy, but this requires a sharp change in the situation on the ground, that means an escalation of military aggression against Ukraine, a worsening of the situation with Navalny, an incident similar to the one with Russian spies in the Czech Republic.

As for disconnecting Russia from SWIFT, which is the EU’s heaviest non-military weapon that it has at its disposal, it would be a “nuclear” option on the part of the EU and would equate it with Iran, a country that cannot operate in the global economy. In the time when the economies of all countries are closely linked to each other and are very often interdependent on one another, all the Russia’s talks about its ability to be self-sufficient are nothing more than ordinary Russian bravado. However, it is important to note that even if the EU needs to make such a decision, it will not act on its own. Brussels will definitely coordinate such his move with Washington.

Before we start talking about how realistic the EU’s possibility of using its “nuclear” option is, it is necessary to clearly understand how serious things are on the ground. Now these things are obviously not serious enough for the EU to resort to such serious decisions. And in the EU, to be honest, there is still no consensus on the issue of disconnecting Russia from SWIFT. But, again, everything can be changed dramatically if Russia continues to aggravate the situation in the issues in which the West has marked red lines for her.

I would also like to note that sanctions have a strong deterrent effect not only when they are applied, but also when they are discussed. That is, the very threat of sanctions or certain actions is already quite an effective weapon. In particular, I would like to note the changes in two important aspects, which are very strong signals to Russia from the EU. The first is that the EU has started talking quite seriously about SWIFT. Previously, as we know, there were no such talks, and this speaks very eloquently about how Russia is now perceived in the European Union. The second important change is the statement by German Defense Minister Annegret Kramp-Karrenbauer, in which she says that the Nord Stream 2 is not important. And I believe that this is a step towards some kind of freezing of the situation around this gas pipeline, which, in turn, means certain understandings with the United States, and strategic consequences for Ukraine, as well, as  domestic political consequences for Germany.

The last 11 years in Bulgaria have passed under the leadership of the GERB. One of the results of this was the formation and strengthening of a certain political status quo, which was a stupor for its further development of the country and the important changes in it, in particular with regard to its deeper integration into European and Euro-Atlantic structures. And the last summer protests very clearly showed that there is a great demand in society to change this status quo. Despite the GERB’s loss of power and the entry of new parties into parliament, it is still too early to say that this status quo has been disrupted. For real changes, several electoral cycles must pass, after which some more or less stable government will be formed. Only then it will be possible to talk about the direction in which the country will move.

As for the impact of these changes on such an issue as the deepening of the Euro-Atlantic integration of Bulgaria, it can be said that such a prospect exists, but one must understand that this will not be a quick process.

This is unlikely to happen in the nearest future, but I hope that with time, the real changes in the country will lead both to an increase in the number of NATO military contingents on the territory of Bulgaria, and to a wider presence of NATO and European agencies, as well as to more active participation of Bulgaria in NATO initiatives than we have seen in recent years.

One of the problems, why NATO in Bulgaria is not present at the same level as, for example, in Poland, or in neighboring Romania, is that the talks about NATO in Bulgaria until now were rather unpopular and very much neglected. And the reason here was not only the reluctance of the government or political parties to promote this topic, but also the passivity of organizations, which are responsible for public diplomacy in our country along the NATO line, and which, obviously, did not do their job properly.

As a result, the public support for NATO in Bulgaria has continued to decline over the past 15 years. Today it is at just over 30%. Therefore, on the issue of increasing of NATO presence in Bulgaria, in parallel with the initiatives of the political forces, an active information campaign aimed at improving the image of NATO among the Bulgarian society should also be conducted.

As for the lack of desire in Bulgarian politicians to talk about NATO, it can be explained by the fact that they find it very difficult to explain to the society that NATO is primarily an attribute of national security, and not a direct opposition to Russia. Given the fact that today in the Bulgarian society there is still a relatively friendly attitude towards Russia, local politicians think that talking about NATO – no matter in which vein – can simply scare away some of their voters. But NATO, in fact, is not only about soldiers, tanks and aircrafts. This is also about political cooperation, the development of the values of democracy and the rule of law, countering emergencies, countering cyber threats, energy security etc… But for Bulgarian politicians, these are complex matters, which are difficult for them to explain to the population. They instead are used to the easier ones. Therefore, it turns out that it is simply more convenient for them not to talk about NATO than to raise this issue and try themselves to look into it.

But even so, Bulgaria remains the part of the West. Her approach to the general line of European policy, and in particular with regard to Russia, has always been constructive. That is, Bulgaria is not that “Trojan horse”, which she is usually described as.