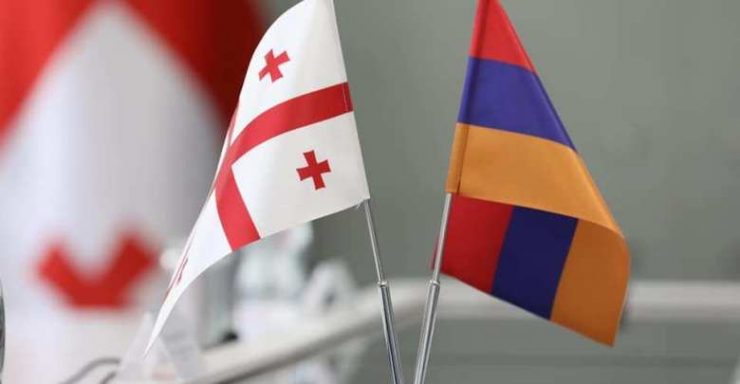 Armenia-Georgia relations: History, current phase and scenarios for the future

Armenia and Georgia share a long history of mutual relations. In more recent times, both were part of the Russian Empire and later the Soviet Union. The Soviet history is full of some anecdotal pieces of evidence of Armenia – Georgia friendly competition. The collapse of the Soviet Union created a new geopolitical situation. It brought both countries into the forefront of regional rivalry between Russia, Turkey, and added new players such as the US, the EU, and China. The conflicts in Nagorno Karabakh, Abkhazia, and South Ossetia put Armenia and Georgia on different barricades. Armenia was a staunch proponent of the people’s right to self-determination, claiming that non recognized Republic of Artsakh (Nagorno Karabakh Republic) should never be part of Azerbaijan. At the same time, Georgia called for the restoration of its control over Abkhazia and South Ossetia.

The Euro-Atlantic aspirations of Georgia launched by President Shevardnadze in the early 2000s and fomented by President Saakashvili after the 2003 Rose Revolution put Georgia clearly against Russia in the South Caucasus. Armenia, meanwhile, established a strategic alliance with Russia entering Collective Security Treaty Organization and hosting a Russian military base in Gyumri. The 2008 Russia – Georgia war and the recognition of Abkhazian and South Ossetian independence by Russia was another tough challenge for Armenia – Georgia relations. Yerevan and Tbilisi managed to avoid disaster. Armenia did not recognize the independence of Abkhazia and South Ossetia, and President Sargsyan even awarded President Saakashvili with the Medal of Honor in June 2009.

However, Armenia – Georgia relations have never reached a level of strategic cooperation. The main partners of Georgia in the region were Azerbaijan and Turkey. Georgia benefited economically by becoming a transit state between Azerbaijan and Turkey. Three states launched a trilateral cooperation mechanism in June 2012 with the first meeting of the foreign ministers and the signature of the Trabzon declaration. Soon the cooperation was raised to the Presidential level in May 2014. Given the hostile policy of Azerbaijan and Turkey towards Armenia, the strategic partnership of Georgia – Azerbaijan – Turkey could not make Armenia happy and contribute to Armenia – Georgia relations. However, Armenia and Georgia reached some equilibrium – Armenia uses Georgian territory for its export/import operations, does not recognize the independence of Abkhazia and South Ossetia, and turns a blind eye to the growing economic influence of Azerbaijan and Turkey in Georgia. Georgia receives financial benefits by providing transit services to Armenia and simultaneously supports the Azerbaijani position on the Karabakh conflict. Bilateral Armenia – Georgia economic relations were always at a low level. In the recent decade, Georgian Black Sea resorts have become “Mecca” for low-middle income Armenians to spend summer holidays, but nothing significant happened besides one-way tourism and transit services.

The 2018 “velvet revolution” initially brought some new features in bilateral relations. The new government of Armenia was interested in studying Georgian reforms experience, especially in the field of fight against low/middle level corruption. There was a widespread perception that Armenia’s new, more democratic government would inevitably start to drift away from Russia. Some experts started to articulate even the notion of Armenia – Georgia “Alliance of democracies” in the South Caucasus to foment the Western influence and counter authoritarian Russia, Turkey, and Azerbaijan.

However, despite several official and unofficial summits between Armenian Prime Minister Nikol Pashinyan and various Georgian Prime Ministers, no significant breakthrough was reached, and economic relations declined further. After the “Velvet Revolution,” Armenia lost its place in the Georgian electricity market. In the mid-2000s, Armenia provided up to 15 percent of electricity consumed in Georgia, while in 2019, Armenia exported zero kilowatt-hour electricity to Georgia. The Armenian new government decided to change the agreed plans to launch Russia – Armenia – Iran – Georgia energy corridor. The sides signed the relevant document in April 2016 to launch the corridor in 2019, but after the ‘Velvet Revolution,” the Armenian government decided to amend the project.

The 2020 Karabakh war and its aftermath created a new geopolitical situation in the region. Georgia officially declared neutrality during the war and canceled military transit through its airspace and land to Armenia and Azerbaijan. However, Azerbaijani civilian cargo planes implemented almost daily flights from Turkey and Israel to Azerbaijan using Georgian airspace. Legally Georgia had no reason to ban these flights or demand their landing in Tbilisi for checking. However, in general, Georgian policy during the 2020 Karabakh war can be described as negative neutrality towards Armenia, and it did not surprise expert circles in Armenia. Georgia is too dependent on Turkey and Azerbaijan economically to damage its relations with these states for satisfying Armenia. And Yerevan itself did not make serious efforts to press Georgia on the military transit issue through bilateral talks or the involvement of the US and EU.

The results of the Karabakh war have raised several concerns in Georgia. Tbilisi is worried by the deployment of the Russian peacekeepers in Karabakh and views it as another step towards strengthening the Russian positions in the region. The possible opening of communications between Armenia, Azerbaijan, and Turkey may deprive Georgia of its position as the only transit route between Russia and Armenia and Azerbaijan and Turkey. Georgia may worry that after coming into terms in Karabakh, Russia and Turkey may potentially make another deal, this time for Georgia. However, this scenario is quite unlikely due to the problems between Ankara and Moscow and the strong involvement of the US and EU in Georgia, which was once more proved by their active role in solving the recent domestic political crisis.

President Aliyev’s offer to establish a regional 3+3 format (Armenia, Azerbaijan, Georgia, Iran, Russia, Turkey) did not receive a warm welcome in Georgia. Tbilisi views this format as an attempt to further decrease the role of the US and EU in the region and transform it into a closed club, where Russia and Turkey are decision-makers with the occasional involvement of Iran. Georgia will probably not agree to participate in such efforts while keeping its strategic partnership with Azerbaijan and Turkey and friendly relations with Armenia.

The global order passes through a tumultuous transformation from the “Unipolar Moment” of 1991-2008 marked with the absolute US hegemony to the multi-polar system. The new world order may take decades to be fully shaped; however, the fundamental contours are discernible. The emergence of the “Multi-polar world order” will inevitably trigger regional instability and the rivalry for regional hegemony. The absence of the world hegemon or the “world policeman” means that the second-tier states will be more inclined to use coercion as the primary tool to push forward their national interests. The 2020 Karabakh war was the harbinger of the more volatile and insecure world for the South Caucasus.

Meanwhile, the emerging multi-polar world will be shaped by the growing tensions along the new fault lines. South Caucasus may become one of such contested areas between Russia and the US. Much will depend on the developments of the US – Russia relations. As for now, the Biden administration has sent mixed signals to Moscow. Biden called Putin a killer and imposed new sanctions while offering a presidential summit and calling for “predictable relations” with Russia. If the US pursues a simultaneous policy of containment both against Russia and China, the former Soviet space, including the South Caucasus, will be transformed into an arena of tough US – Russia rivalry. In this scenario, Armenia – Georgia border may become a new dividing line. Regardless of domestic developments, Georgia will remain within the US and Armenia within the Russian spheres of influence, while Turkey will seek to balance between Moscow and Washington, keeping its membership in NATO. These developments may complicate bilateral Armenia – Georgia relations, making any positive developments less likely. In the second possible scenario, Russia and the US may come to terms regarding the critical bilateral issues, including geopolitics of the former Soviet Space. The US may stop actively countering Russia in the South Caucasus, relying mainly on Turkey to keep indirect involvement in the region. In this case, the region will be mainly arena for Russia – Turkey competition. Kremlin and Ankara will seek to strengthen their economic influence in the region by offering new integration projects. The less geopolitical fight between the giants will make the life of Armenia and Georgia a little bit easier, allowing them to concentrate on their domestic development and may create new opportunities to foster Armenia – Georgia economic relations.