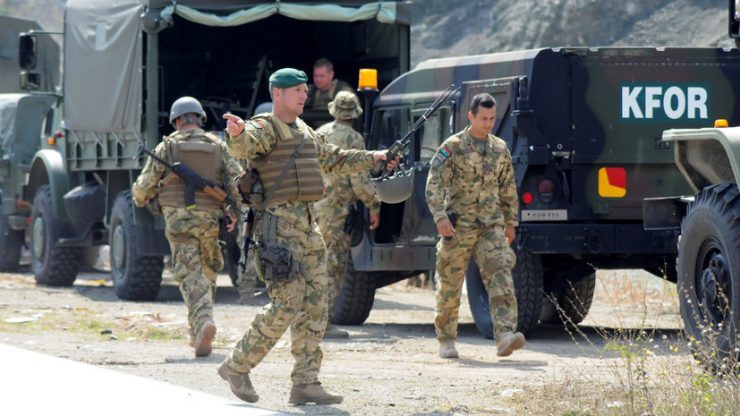 KFOR withdrawal: What next?

Against the background of recent events when Serbian President denounced the threat of preparation of one of the world’s power to come up with an initiative to withdraw the KFOR peacekeeping forces and the UNMIK international mission from Kosovo, it is necessary to analyze the real prospects for the withdrawal under the rule and within the frameworks of international law.

It should be noted that in June 1999, after the NATO military campaign over Yugoslavia, the United Nations established the United Nations Mission in Kosovo (UNMIK). This mission aimed to administer Kosovo without prejudging its external status, is defined by the UN Security Council Resolution 1244. For the first time in history, the UN was given an unprecedented mandate, both in scope and structural complexity. Unlike many other previous UN missions, UNMIK was formally divided into civilian and military components. The international civil component was mandated “to provide an interim administration for Kosovo under which the people of Kosovo could enjoy substantial autonomy”. The NATO-led Kosovo security forces, known as KFOR, were responsible for “carrying out military tasks” and “shouldering” UNMIK in civilian peace-building tasks.

The progress and achievements in post-war Kosovo could not be imagined without an international presence. Despite policy efforts to hand over authority to local structures in some sectors, international presence remains a necessity. All the salient features of post-war and transitional countries in the Balkans have been attributed to Kosovo. The UNSC Resolution 1244 that mandated the UN Mission in Kosovo was as good as the political compromise that gave rise to it. Unlike many resolutions, 1244 has had quite an impact on the situation on the ground. Ambiguous aspects in the resolution led to conflicting interpretations by different stakeholders, such as Kosovo’s legitimate political representatives, UNMIK, and Serb political entities. Especially questions that concern the withdrawal of mission become subject of discussion today. Thus, it should be noted that in accordance with norms of international law, issues that relate to the Security Council decisions to launch, close or significantly alter a United Nations peacekeeping operations are regulated by the UN Charter. Therefore, in the case of arising any controversial issues in the field of of international peace and security, it should be referred to the written norms of international law. So the responsibilities and powers enshrined in Chapter VII of the Charter are central to the Security Council’s ability to uphold international stability and peace by averting or ending conflicts. Discussion on completion of a peacekeeping operation or substantial modification of its mandate should be carried out only in accordance with the UN Charter. In all these cases, it should be referred to the decision-making process of the Security Council as it enshrined in Article 27 “…decisions of the Security Council on all other matters shall be made by an affirmative vote of nine members including the concurring votes of the permanent members…”

Furthermore, the Security Council plays a key role in the formulation and implementation of vital decisions. A good exit strategy results from a good entrance strategy. In this connection, the Security Council is expected to reach agreement on a clear and achievable mandate based on a common understanding of the nature of the conflict. The Secretariat should provide the candid and well informed analysis that the Security Council’s decision on an effective peace strategy will require. Perhaps most importantly, as a mandate approaches its expiration date or if there are calls for the operation to be closed, it is especially useful for the Security Council to engage in a thorough and frank discussion, both among its members and with troop-contributing countries, of the rationale for renewing the mandate, withdrawing, or significantly downgrading the United Nations presence.

When it comes to the importance and future of the mission, it should be emphasized that for Serbia, the presence of KFOR and good communication with the mission is important as a guarantee of stability and a secure environment for the Serbian community.

Given that the end of the dialogue between Belgrade and Pristina, which should result in a comprehensive agreement on the normalization of relations, is far from the conclusion and the fact that Kosovo is not recognized by four NATO members, which makes its Euro-Atlantic perspective uncertain, KFOR will remain the only legitimate military force in Kosovo. However, it will also, as has done before, adjust its activities, structure and numbers of members in order to fulfill its mandate.

So, under the circumstances, there seems to be no alternative to the continued presence of KFOR and UNMIK and strict compliance with UN resolution 1244 (1999).  It can be considered that the presence of KFOR in Kosovo is still more than needed, not only to provide peace in Kosovo but also in the region, as the consensus in Belgrade-Pristina dialogue still hasn’t been reached.