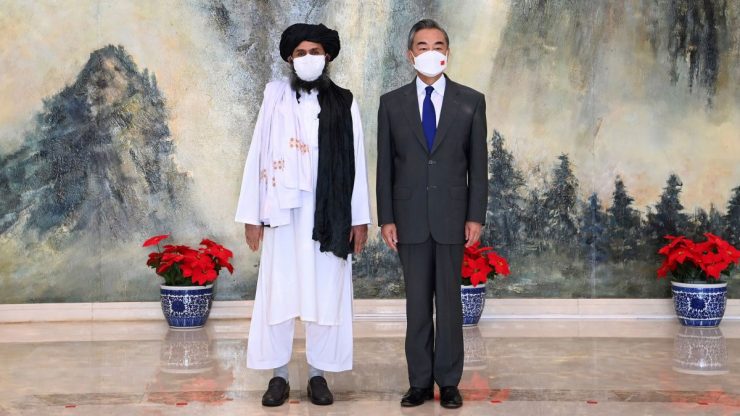 Since President Biden announced that the United States troops would withdraw from Afghanistan by September 11, the world has watched how to handle remaining “the Afghanistan Question” in the post-U.S. occupation era. Historically, due to the fiascos of British expeditions in the 19th century, the Soviet invasion during the 1980s and the present US-led anti-terrorism war in Afghanistan, an inquiry involves who would be willing to go to the war-torn country, which also refers to the “graveyard of empires”.

Recently, some scholars have tried to explore the prospect of China’s embroilment into the “graveyard of empires”. Velina Tchakarova, who is Director of the Austrian Institute for Europe and International Security (AIES), observes that in history “great powers have always tried and failed to turn Afghanistan into a hotbed for their geopolitical ambitions including the U.S. unsuccessful mission in the country.” Now a rising power like China is no exception. Yet Afghanistan will be likely a new front in regional rivalries because China is deliberately preparing to fill the void left by the United States for three objectives, that is, “avoiding a further expansion of the conflict and all-out civil war, promoting intra-Afghan negotiations, and preventing the rise of terrorist forces and activities.” Tchakarova did make a concise summary of Beijing’s geostrategic concerns.

I first put forward the term “China’s Quad” a few months ago, referring to China’s strategic partnerships with Pakistan, Russia and Iran if Beijing aims to play the great game in Eurasia and beyond. Accordingly, I see it necessary for China to work with its quadruple partners to rebuild Afghanistan, which borders China’s most vast region with diverse ethnic and religious minorities. Here arise the puzzles on how China would work with Pakistan, Russia and Iran unprecedentedly to turn Afghanistan into the common geopolitical gain, e.g. if possible to remake it into a permanently neutral state like Switzerland and Austria? And what kind of resources are expected from China to use in achieving its strategic goals in a scene of tension and violence for four decades?

This study argues that China possesses two advantages that would likely outmatch Britain, the Soviet Union and the United States in the case of Afghanistan. First is the long-time stable relations between China and Afghanistan. Even during the heyday of the Cold War, the differences in their political, social-cultural and religious systems didn’t prevent Beijing and Kabul from recognizing reciprocally in 1955 in light of the principle of peaceful co-existence and mutual respect. Furthermore, in 1960 the two sides signed the treaty of friendship and reciprocal non-aggression. Since then, no matter who takes power in Kabul, China has observed a belief that a stable, unified and amicable Afghanistan is essential to China’s security and development. Now as the largest rising power in Eurasia, China certainly plays an influential role in the peaceful transition of power in post-war Afghanistan. Even be aware of the ongoing conflicts locally, China has selectively invested in major infrastructure projects such as communication and transportation.

On July 28 in Tianjin, a metropolitan city in China, Chinese Foreign Minister Wang Yi met with Mullah Abdul Ghani Baradar, political chief of Afghanistan’s Taliban. His visit to China was seen as the most crucial diplomatic coup for the Taliban to boost its international stature after recent military gains in the wake of the withdrawal of U.S.-led forces from Afghanistan. Wang said to his Afghan guests that “the Afghan Taliban is an important military and political force in Afghanistan and is expected to play a constructive role in the country’s peace, stability and reconciliation process.” Accordingly, all factions and ethnic groups in Afghanistan are urged to act on the “Afghan-led and Afghan-owned” principle that was endorsed by China, aiming to establish an inclusive political structure headed by the Afghan people without any external interferences.

In return, Baradar praised China for being a reliable friend of Afghanistan and its important role in nation-rebuilding. In terms of domestic politics, the Taliban agrees to stand ready to work with other parties to establish a political framework in Afghanistan followed by a new government rebuilt on laws-based, inclusive and accepted by all Afghan people. In foreign affairs, Baradar confided to his Chinese host that the Afghan Taliban would never allow any force to use the Afghan territory to engage in acts detrimental to China, including no foreign troops remained in the country. This is one of the prerequisites for the new government in Kabul to receive China’s aid. Yet, the Taliban seek “lion’s share of power” in a new government while Kabul generally wants to bring them into the current government, as the special U.S. envoy on Afghanistan Zalmay Khalizad said on August 4. Given this, there is no insurance of the Taliban’s words.

However, China has another leverage to persuade all parties in Afghanistan to hold the peace talks. The Shanghai Cooperation Organization (SCO) is important for China to advance its strategic goals in Eurasia and Afghanistan itself has been its observer state for more than nine years. On July 14, a special meeting of the SCO—Afghanistan contact group was held in Dushanbe. Chinese Foreign Minister Wang Yi stated that Afghanistan is an important member of the SCO family; thus, it is necessary to pool efforts to assure the local situation is in line with the common interests of Afghanistan and other countries concerned.

So far, the SCO member states have agreed to extend the necessary assistance to nation-rebuilding in Afghanistan while jointly facilitating counter-terrorism cooperation and persuading the Taliban to honor its commitment to break with international terrorist groups. Since China is willing to hold intra-Afghan talks in China in due course, FM Wang Yi met with his Afghan counterpart Mohammed Haneef Atmar during the SCO conference, assuring him that China will support an inclusive political structure in Afghanistan to move towards an independent and neutral nation. Wang clearly said that the Taliban needs to stand clear of all terrorist forces. Echoing Wang’s remarks, Afghan Foreign Minister Atmar reiterated that Afghanistan looks forward to cooperating with China in all areas of politics, economy, education and security in the upcoming nation-rebuilding era.

If Beijing’s decision to play a great role in Afghanistan is seen as driven by its geopolitical and geo-economic designs, it is also necessary to look into China’s image-rebuilding on the world stage. As the rise of China has caused controversial views on its ascendant power, Beijing has worked hard to enhance its image as a non-assertive power. It requires China to play a peace-broker transparently in Afghanistan, where the previous superpowers failed to turn the country into a stable, peaceful and progressing one. Hans Morgenthau once put it, “The policy of prestige was rarely recognized as an end of the struggle for power on the international scene”. Yet China does need to improve its image on the world stage by acting as a civilian power to rebuild Afghanistan including the SCO to play a key role in this regard. In fact, China culturally has a sort of soft power to act, as Stephen Walt said recently, China not only holds the non-intervention principle but also acts more like a Westphalian-typed power in foreign affairs. Accordingly, China argues that the post-war Afghan governance structure should conform to the country’s unique national conditions and development needs without external pressures. China is welcomed by Afghanistan and many other countries which have aspired for political stability, social fairness and economic benefits.

True China, Russia, Pakistan and Iran have their strategic designs. Yet, the U.S.-led military presence in Afghanistan is perceived by China’s “Quad” as a threat to their common interest and stability in the region. In addition, they have shared compatible interests in rebuilding a stable, progressive and inclusive Afghanistan through bilateral and multilateral trade. In the long run, the SCO expects to incorporate Afghanistan into the regional organization rather than isolation from the world. To that end, China needs to learn from its international cooperation properly and steadily. Taking the lesson from the Cold War, China and its strategic partners necessarily allow new Afghanistan open to all rather than becoming an exclusive sphere of influence.

In 2014, China’s foreign policy and national security elites approved the core paper of the “NEWS” strategy which aims to secure its safe access to Eurasia where Afghanistan is the vital pass. For sure, China has several advantages compared to the previous great powers which were buried or being buried in the graveyard of the empires. Yet, Beijing should be also aware of the scene with severe tensions, long-term conflicts and frequent external forces in Afghanistan’s politics. Considering this, this study argues that China must hold prudently the quadruple partners together, e.g. Russia can persuade India to cooperate in rebuilding Afghanistan through the concert of the SCO and ease the pressures from the U.S. and its allies. Pakistan can make the Taliban go for a peaceful settlement in Kabul, however, China needs to encourage its “brothers in ironclad” to do so because it is the only country that has backed the Taliban as well as harbored its top leadership in Pakistan. Equally as an observer state of the SCO, Iran is sure to act a major stabilizer in the regional politics as new President of Iran Ebrahim Raisi has vowed to look to the East for the security and economic needs. In light of what has been discussed above, it is the turn for China to play the great game in Afghanistan and beyond in light of its ancient wisdom and contemporary tips.