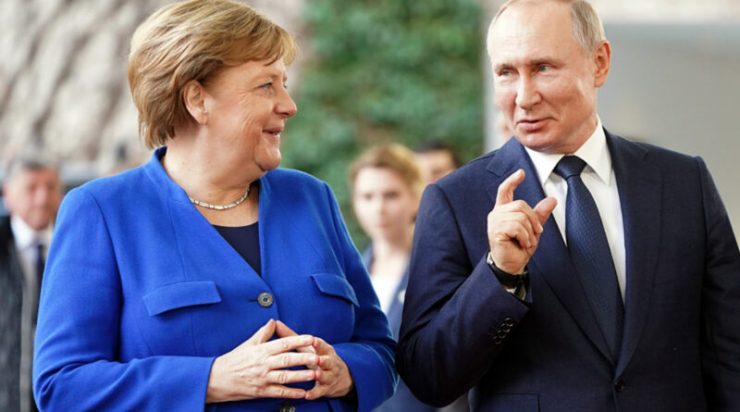 President Putin and his henchmen at Gazprom are playing a mean game of poker, planning to use an artificial gas shortage this winter to extort pipeline concessions from the EU. But if the West plays its hand right, Putin’s play could backfire.

It’s all adding up. First came the news that Gazprom had not booked additional transit capacities in Ukraine for July and August. Then came the reports that the Russian firm was deliberately making withdrawals from underground gas storage facilities (UGS) in Germany. The outlines of Gazprom’s strategic play are now clear.

Its main objective is to create gas shortages in mid-winter, threatening peak-demand balancing in Europe and forcing EU governments to unlock the full potential of the Nord Stream-2 (NS-2) and Turk Stream-2 (TS-2) pipelines – or else to face public anger over possible interruptions of gas and heat supplies. Sub-plays include attempts to obstruct supplies of gas to EU members from Norway in the North and Azerbaidjan in the South.

It’s vintage Kremlin: weaponise energy resources to coerce and subdue Europeans. And, frankly, it makes outgoing German chancellor Angela Merkel look pretty silly. She’s been arguing that the new pipelines are a Good Thing because they will give the EU new leverage over Russia’s bullying conduct. Come the bleak midwinter, Russia’s hard-man president Vladimir Putin is no doubt saying to himself, we’ll see who has the leverage.

Of course, Mr Putin is not the only factor. There’s also Brussels’ unfailing talent for shooting itself in the foot. The EU’s climate policies further undermine the fundamentals of EU energy security. Despite the hype, renewables at present add almost nothing to the Union’s energy independence.

The cards Gazprom has accumulated so far would seem to put it in a winning position. Europe’s leaders are increasingly nervous about sky-high energy prices and depleted gas stocks. Most of them are losing hope of a collective response to Mr Putin’s blackmail and are increasingly eager to identify quick-fix bilateral options. The European Court of Justice (ECJ), in its ruling on the Poland vs EC case, characterised Germany’s argument as saying that energy solidarity was a “purely political” concept – implying that it was notional. This was spot on: the ECJ disagreed, but the Germans seem to have prevailed. As a result of give and take between Mr Putin (mostly take) and Ms Merkel (mostly give), Ukraine, Georgia and Moldova are on their own. The EU and the US are promising funds to help future “green” energy transition. But the promises are vague – and simply irrelevant to imminent energy needs.

Logically enough, the Kremlin is targeting Germany, the EU’s and NATO’s weakest link. And it’s building on the asymmetrical energy vulnerabilities of Russia and the EU – and Europe’s lack of the gas liquidity it would need to replace, at least in part, Russian gas.

Some things don’t change. One law of the post-1989 world, in particular, is set in stone: to contain or balance Russia’s energy policy extremes, sanctions are ineffective unless alternative supplies are in place. For whatever the talk, when push comes to shove, EU politicians will always treat the energy security of their citizens as the highest priority. If the EU and NATO do not prove themselves by identifying and implementing a shared response to Russia’s energy bullying, military security guarantees will just hang in the air like bunting – decorative, but of no real practical relevance.

As far as alternatives are concerned, US shale gas is one of the key factors. Following last year’s oil and natural gas price collapse, US shale gas producers suffered severe losses, with US total gas output dropping by one per cent over 2020. However, performance in 2021 so far, and prospects for the rest of the year, are a lot more cheerful looking: the US government’s Energy Information Administration (EIA) forecasts US gas production in the year as a whole at close to the 950 billion cubic metres mark – up from 914 billion cubic metres (bcm) in 2020. This is encouraging, since it should help the US, against the background of a drop of more than 0.9% in domestic natural gas consumption (to 852 bcm), to regain its global leadership as the world’s swing producer of gas. Even quite small percentage changes in domestic consumption in the US and total output can have quite large percentage effects on net exports.

And it‘s doubly encouraging because it means the market is asserting itself against the odds.

The new US Administration is committed to restricting oil and gas exploration and production. But increased output means that the market thinks otherwise. And not only in the US itself: according to the EIA, the country’s liquefied natural gas (LNG) exports surged by no less than 42%, year-on-year, in H1 2021, to 50 bcm. Now, in accordance with established patterns, Asia was the top destination for US LNG in the first five months of the year, with its average share in the total at 46%. Europe, by contrast, accounted for 37%, not enough to counter Russia’s strategic blackmail. But the good news is that American natural gas exports are likely to grow until the end of 2021.

And this is the weak spot in Mr Putin’s hand in his game of gas poker with Europe. He’s betting on high prices and rising demand in Europe unmet by Gazprom’s competitors. But he may be disappointed.

The latest chapter in the pandemic saga has revised optimistic oil and gas demand projections. Exorbitant gas prices have forced China, India and many countries in Europe to turn to coal stocks and coal power generation, sidelining their climate ambitions for the moment. The combination of weaker demand and high gas prices could stimulate natural gas supply, thus leading to a market inversion, with winter gas prices significantly (and unusually) lower than summer ones. The task of balancing peak winter consumption and compensating for inadequate volumes in UGSs might, in this case, fall to LNG contracts – and not to the forced use of NS-2 and TS-2 on which Mr Putin is relying.

That’s a hypothesis at the moment. But it could become a reality if and when EU and NATO member states seek a collective response to the challenges facing their energy security. In addition, the speculative high summer gas prices mean that futures contracts with delivery dates in February or March 2022, benchmarked on Henry Hub Futures plus additional costs for delivery – become attractive for both US gas producers and EU buyers.

In other words, one way and another, if the situation is properly handled, there could be enough gas to get the EU through the winter with a little help from its friends – and without having to ask for any help from its arch-foe. The volumes of gas involved are not actually all that large. EU gas storage capacity is about 60 bcm, which at current injection rates could be 70% full by end of September. Comfort could be ensured by additional US LNG deliveries of 10-15 bcm in February-March 2022.

But it’s not just a question of following the market or finding a solution to a short-term crisis. A strategically motivated US-EU gas bridge could not only frustrate Gazprom’s Nord Stream-2 blackmail game, but also inflict a long-term loss of EU market share on the Russian gas monopoly. A coordinated response within NATO’s energy security network could draw on the experience in crisis management, after the 1973 Arab oil embargo, that led to the emergence of the International Energy Agency (IEA). The Southern Gas Corridor, the Three Seas Initiative and new gas terminals and infrastructure could all contribute to establishing a permanent crisis-response mechanism of a sort that would represent an optimal mix of market and geopolitical approaches.

A coordinated US-EU energy policy could also cover relatively obscure areas in energy relations with Russia. One such is the lack of reciprocity between the EU and Russia in accessing gas transmission systems and cross-border delivery points: no EU company can buy Gazprom gas at the Russia-Ukraine border or Azeri gas at the Russia-Azerbaijan border, for instance.

The EU and the US should also agree to dismantle the complex web of privileges contained in Gazprom’s legacy long-term contracts on supply and transit services. These preclude a level playing-field – a situation that just cries out for comprehensive capacity-release programmes and anti-trust market reviews.

Moreover there’s widespread understanding of the need for strategic natural gas reserves at both national and EU-wide levels. And yet relatively little has been done about it. Current events are proof of that.

There’s an encouraging precedent. The EU used Russia’s brutal gas supply cuts in the cold winters of 2006 and 2009 as an opportunity to take radical steps to reduce dependency on Russia, consolidate and integrate the EU’s fragmented market, and set standards for the diversification and liberalisation of national gas markets.

In the same way, unfolding events in 2021 call for a substantial upgrade of energy security coordination within the EU and NATO. So what are we waiting for?