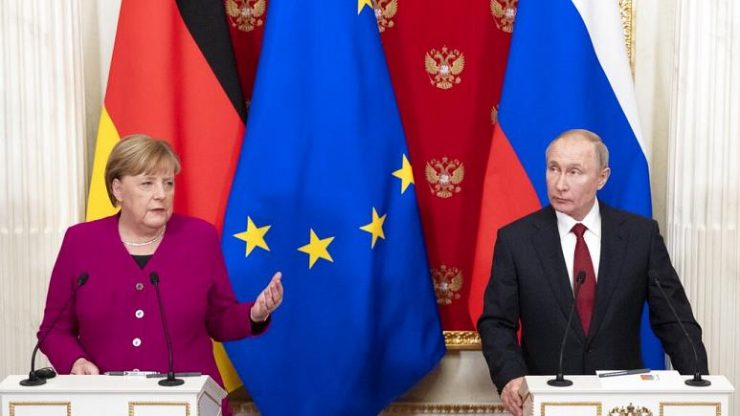 Has Germany Lost its NATO Compass?

By the end of 2020, a strange information appeared in Bosnian and German media: having made unilateral concessions to the long campaign of Russia to put an end to the Office of the High Representative in Bosnia-Herzegovina, Germany now wants to overthrow the current High Representative, Valentin Inzko, and bring the OHR under control of its own man, Christian Schmidt. Does this bilateral initiative have any legal basis? And, is this petty manoeuvre in the Balkans going to open Pandora’s box on the global level, again?

The Office of the High Representative was established in 1995 by the Dayton Peace Accords, to exercise the remaining10% of the Bosnian state sovereignty, which has in 90% been ceded to the two ethnically defined sub-state units, the so-called entities. As such, High Representative has the authority to overpower blockades and vetoes introduced by the entities. High Representative is an inseparable part of Bosnia’s Dayton Constitution, no less than the entities and their veto power. In that sense, the Russian campaign to eliminate the Office of the High Representative while preserving the entities and their veto power is legally absurd: one cannot take one part of a contract out, while insisting on implementation of the rest; for, taking one part out nullifies a contract altogether. However, implementation of the Russian requests under the given conditions of the Dayton Constitution would destroy the last remnants of the Bosnian sovereignty and integrity, granting full sovereignty to the entities and resulting in Bosnia’s dissolution. Russia, acting for years as a self-proclaimed supporter of Serbia and its interests to dissolve Bosnia, does not introduce any novelty in its foreign policy in the Balkans. Yet, what is going on with Germany, a NATO member, an EU leader, and a self-promoted supporter of Bosnia’s sovereignty and integrity?

It should be noted that a High Representative can be replaced only by decision of the UN Security Council, under recommendation of the Peace Implementation Council, a body for implementation of the Dayton Peace Accords consisting of diplomatic representatives of the US, Russia, France, Germany, Italy, Great Britain, Canada, Japan, and the Organisation of the Islamic Conference represented by Turkey. The UN Security Council decisions can be reached only by consensus of the permanent members with veto power. Decisions of the Peace Implementation Council can also be reached only by consensus of its original members (US, UK, France, Russia, Germany, Italy). It is, therefore, legally absurd, again, to replace a High Representative by a bilateral agreement between Russia and Germany, without any such consensus. It would mean a violation, if not elimination, of all legal procedures, not only those referring to the institution of High Representative, but also those related to the Security Council and the UN as a whole. Indeed, what happened to the German foreign policy, hitherto absolutely devoted to international legal procedures and international law?

An explanation for the German change of course, presented in both Bosnian and German media, was German increasing dependence on Russian gas supply, bearing in mind that Germany has given up all alternatives to the Nord Stream pipeline, which delivers Russian gas to Germany. Once upon a time, the former German Foreign Minister, Joschka Fischer, strongly advocated an alternative pipeline, called Nabucco, which would bring Iranian gas to Germany and the rest of Europe. On the other side, Chancellor Gerhard Schroeder, who eventually became Chairman of the Board of both Nord Stream AG and Rosneft, a Russian oil corporation, advocated the Nord Stream pipeline as the preferential one. Eventually, Schroeder had enough luck to have a comprehensive anti-Iranian coalition (ranging from Russia to the US) on his side, so that the Nabucco project was eventually abandoned and the Nord Stream remained the only option. At the time, Schroeder was criticised by German media for linking his private interests with strategic interests of Russia: for, the company Nord Stream AG, of which he was the Chairman, was in 51% owned by the Russian corporation Gazprom. In this way, Schroeder made Germany dependent not only on Russian gas supply, but also on Russian geostrategic interests, articulated by the Kremlin and Gazprom. Schroeder’s personal friendship with Russian President, Vladimir Putin, did not pass unnoticed, either. In this way, Germany not only gave up its own energetic sovereignty, but also abandoned the official EU energetic security strategy, which stipulates diversification of energy supply sources. Schroeder thus intentionally buried the traditional German Ostpolitik; but what was the reason for the next German government, led by Angela Merkel and controlled by the CDU/CSU coalition, to adopt the same course? What has happened to the German geostrategic orientation? Has Germany lost its NATO compass?

After the disastrous consequences of the 1973 oil crisis, German government invested heavily in construction of gigantic oil and gas storages, with a strategic goal to control negative effects of permanent oil price fluctuations on the German economy and population. Yet, these storages have eventually ended up in ownership of the Russian oil and gas giant, Gazprom. Such a development has given Gazprom effective control of the German energy market. Consequently, it has given Gazprom and Russia strategic influence on the entire economy of the European Union. One can only wonder, why has Germany decided to deliver not only its own destiny, but also that of Europe, to Russia? And then, no wonder that Great Britain has opted for Brexit to simply run away – this time, not from the Brussels bureaucracy, but from the Kremlin’s oilgarchy and Russian energocracy.

This U-turn in geopolitical orientation, unilaterally performed by Germany but tacitly agreed upon by the rest of the EU countries, certainly generates shockwaves throughout the Euro-Atlantic structures, inevitably separating Europe from the Atlanticist part of its identity. In this context, the most loyal American allies among the NATO members, Turkey and Germany, have turned their backs on the US and started looking at Russia as a new strategic partner. Both of them utilised the crisis of leadership in the US, caused by President Trump, to reclaim their sovereignty and decide which side to turn to. Since Trump has managed to disable the entire global security architecture as constructed after the World War II, attacking all multilateral organisations and treaties and thus opening the gates of the West for the Russians and Chinese to enter, German and Turkish re-orientation can be justified as rational. Yet, a bitter taste of betrayal – by Germany, by Turkey, but no less by Trump – lingers on. Does it mean that America, under Donald Trump, has eventually lost the Cold War, as Russia had once lost it under Boris Yeltsin? Will American influence be reduced to the English-speaking world? Is Germany, together with Russia, establishing a new, Eurasian Union? Is China going to be a part of it, given its hasty trade deal with the EU? Has the worst Anglo-American nightmare, that of a united Eurasian “World Island”, finally come true? Or the current German-Russian pact is going to end up like the previous one, smashed under the weight of the Anglo-American axis?

Global Pandora’s box has obviously been opened and the world geopolitical order, as we knew it, has fallen apart. A new order, or perhaps a disorder, is approaching. Such a development can be detected at all levels, looking at the top or at the bottom, and is signalled even by the clumsy German attempt to court the Russians by abandoning fundamental legal principles and its own foreign policy postulates in a seemingly insignificant place like Bosnia. Strangely, both Germany and Russia have accepted to play the roles assigned to them in the 1990s by the then British propaganda, which labelled them as patrons of Croatia and Serbia in their efforts to carve up Bosnia along the lines of its multiple religious identities. Whereas Russia openly adopted its role as the protector of the Orthodox Serbs many years ago, Germany’s adoption of the parallel role, that of the protector of the Catholic Croats, is a relative novelty. While in the 1990s both Germany and Russia were reluctant to play the roles casted by others, now they have become eager to demonstrate their rising power through such a game. The attempted appointment of Christian Schmidt leaves no place for doubt that Germany has fallen into this trap with a surplus of enthusiasm. For, the former German Minister of Agriculture, and a member of the Bavarian Christian Social Union (CSU),was publicly decorated by Croatia with a medal of “Order of Ante Starčević” for his promotion of Croatian national interests. He proudly shares this medal with prominent Croatian ultra-nationalists and war criminals, such as Gojko Šušak, Mate Boban, Dario Kordić, Jadranko Prlić, and many others, who were inspired by the Croatian Ustash a regime from the World War II, as much as the Ustashas themselves had been inspired by the then German Nazi regime. In this context, it should be noted that Schmidt’s inclinations are not derived from some religious, pan-Catholic sentiments, but rather from his ideological, ultra-nationalist affinities, for which he was rewarded by his ideological brethren. If appointed a High Representative, Schmidt will probably follow the same path, so he will promote interests of Croatian ultra-nationalists, whose goal is to cede a part of the Bosnian territory and make it a part of Croatia, rather than interests of Catholics in Bosnia. Does it imply that he is going to work together with ultra-nationalists of all sorts – and there are enough of them in Bosnia – on the country’s final dissolution? Is that outcome in Germany’s best interest, and what kind of image does Germany project if it sends Schmidts as its representatives? Finally, what message does Germany leave to the world, if it takes the advantage of the uncertain power transition in America to prepare dissolution of a US-sponsored international treaty, the Dayton Peace Accords, thereby introducing, with a help of Russia, a new era of lawlessness?

There are so many questions to which German authorities should offer valid answers, before they pull the trigger to assassinate both Dayton and Bosnia, and destroy some of the last remnants of the international order. Do they think that they owe these answers to the rest of us?