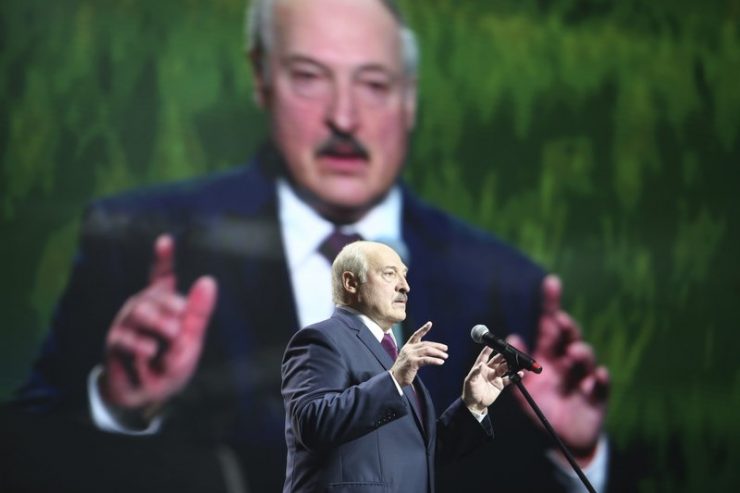 As part of the Russian and Belarusian information warfare against Poland and NATO, the process of creating our country as a direct threat to safety in the region is intensifying irregularly. Depending on Moscow’s and Minsk’s immediate goals, the Polish army is made to be ready to strike or extremely weak and unable to defend itself. In the context of the last days of the official duration of the Zapad-2021 exercises, the activities creating the Polish Armed Forces as preparing for provocation and increasing their readiness to launch an attack in the eastern direction have intensified.

In current Russian and Belarusian media messages, being an element of propaganda activities (which have been integrated with each other for many months), Poland is perceived as a country which is ‘unjustifiably’ and ‘nervously’ reacting to joint Zapad-2021 exercises conducted by Moscow and Minsk. At the same time, Poland is perceived as a country which is preparing for provocations on the border and militarising the eastern and north-eastern parts of the country. One of the components of the message was information about the redeployment of Polish soldiers to the East as the part of the exercises. Within the framework of messages and comments, the fact of participation of these units in the exercises was somehow omitted – the issue of “strengthening the borders” by further units of the Polish Army was emphasized. At the same time, the issue of increasing the number of American troops in Poland and the issue of Poland’s ‘aggressive’ actions aimed at ‘dragging’ Belarus into the sphere of NATO influence was revived again.

The actions of the Russian and Belarusian sides are a continuation of the trend actively developed after the outbreak of the wave of protests in Belarus related to the falsification of the presidential election results by the current regime. Creating Poland as an external and internal enemy was then connected with an attempt to depreciate the image of the protests and opposition, who were presented as ‘traitors’ and ‘agents of Polish’. Currently, we may presume that this direction will be developed due to the need to justify the ‘necessity’ of Russia’s support for Belarus in form of dislocating Russian aviation, ground and missile forces on its territory. These actions are in the context of the announcements concerning Minsk’s plans to spend over a billion dollars on Russian military equipment.

The process of strengthening in Belarus and in Russia the negative image of Poland as a permanent threat and a force provoking tensions will be continued. Depending on the immediate goals, it will be muted or intensified, so as to support other directions of the information war waged against Poland and NATO states. Despite the potential temporary moments of limiting the distribution of the discussed messages, it should be assumed that within the next year, creating Poland as the side which provokes tensions and engages in a “hybrid war” against Belarus and Russia will be a permanent element of Russian propaganda messages within the context of increasing the presence of the Russian army in Belarus.

In connection with the anniversary of the attack of the USSR on the Second Polish Republic (17.09.1939) Russian and Belarusian propaganda centers are activating towards depreciation of the Poland image based on the historical direction. The issue of the USSR attack on Poland is presented in the context of the “Unity Day” holiday, the celebration of which has been set by the Belarusian authorities for the 17th of September. In accordance with Soviet and contemporary Russian and Belarusian historiography, this date is associated with the “victorious march” of the Red Army, which not only “returned freedom” to the peoples of the eastern part of the Second Polish Republic, but also allowed for the unification of Ukrainian and Belarusian lands. Due to the aggravation of relations between the West (including Poland) and Belarus, Minsk and Moscow have decided to refresh this kind of narration, actively using it as part of the information war waged against Poland, among others.

As part of the propaganda actions carried out by the Belarusian and Russian sides (it is worth noting that these messages are integrated, and the Belarusian centers are most likely directed by Russian experts or actively cooperate with them), more and more intensive attempts have been made in recent days to depreciate the image of the Second Polish Republic and contemporary Poland based on the discussed issues. Realizing such actions, the Belarusian party publishes appropriately prepared paradocumentary materials, creating the Second Polish Republic as a country occupying Belarus and almost exterminating the Belarusian, Jewish and Russian population. The extremely negative image of Poland is contrasted with the positive image of the Red Army and the USSR. They point out, among other things, the “criminal”, “fascist” character of the Polish “regime” and emphasize the “freedom” gained by Belarusians as a result of the existence of a communist apparatus on the territory of the Second Polish Republic. In addition to the documentary films broadcasted by Belarusian TV stations such as “ANT”, the Belarusian side prepared, on the occasion of “National Unity Day”, a number of video materials emphasizing the seriousness of the holiday and its unambiguously positive significance for the history of Belarus. These activities are supplemented by articles on Russian propaganda portals which reproduce the indicated narratives. Moreover, in both Belarusian and Russian messages, parallels are being made in order to project an extremely negative image of the Second Republic onto present Poland. Just as before World War II, today’s Poland is supposed to pose a threat to the ‘freedom’ of the Belarusian nation by allegedly destabilizing Belarus. Such messages are supplemented by building a positive image of the Belarusian and Russian armies, which constitute a force defending the nation against the inclinations of Polish provocateurs, imperialists, etc.