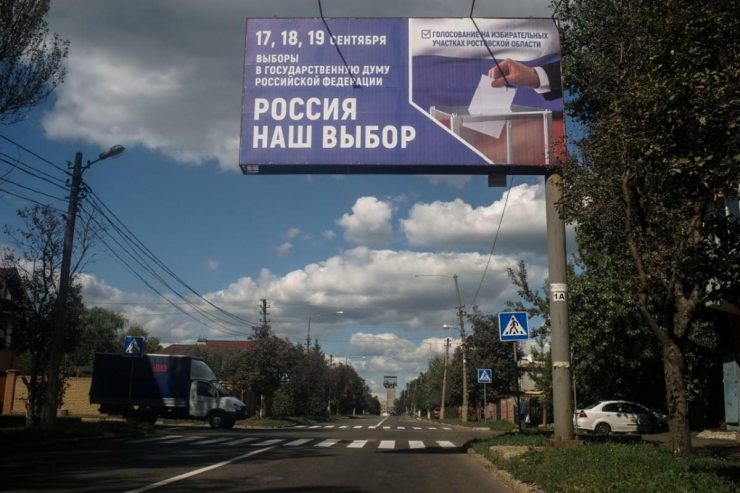 By issuing its passports and involving inhabitants of the occupied territories in its electoral process, Russia is further destroying the peace process in Donbass

The elections in Russia in terms of results have long ceased to carry any intrigue. The stable first places of the ruling United Russia do not surprise anyone for the simple reason that everyone already knows everything long before the start of the election campaign. Despite the mentioned stability in terms of results, the Russian elections each time differ in some organizational features. For example, this year’s elections to the State Duma were marked by the active participation of the inhabitants of the occupied territories of Donetsk and Luhansk regions. By such actions, Russia itself violates the provisions of the Minsk agreements, on the implementation of which it constantly insists, and complicates for Ukraine the possibility of further reintegration of its temporarily occupied territories.

The use by Russia of the “electoral mass” from the territories it occupied (this is exactly how the Kremlin sees the local population with Russian passports on the eve of the elections) is nothing new. In previous elections, for example, the pro-Kremlin political forces actively used the votes of “new Russian citizens” from the self-proclaimed and Moscow-dependent Transnistria, as well as Russian-occupied Abkhazia and South Ossetia. This year, the Russian-occupied parts of the Ukrainian Donetsk and Luhansk regions have been added to the “electoral donors” of United Russia and other Kremlin favorites.

And, interestingly, Moscow did not intend to keep silent about the use of these territories in the Russian electoral process. On the contrary, a real election campaign was launched in occupied Donbass with active street agitation and live communication between local voters and representatives of United Russia and other pro-Kremlin parties who were coming to the region. All Donetsk was covered with billboards with calls to participate in the upcoming elections. Moreover, there was no campaigning for any particular party, which suggests that the main goal was simply to involve the maximum number of people in the Russian political process.

According to the United Russia party itself, 2,500 presentations were held in some areas of Donbass. In particular, the forum “Russia – Donbass: the Unity of Priorities” was held in Donetsk, the “Forum of Russian Citizens” – in Lugansk. During these events the voters were told about how good it is to live in Russia, how this country helps and empathizes with the inhabitants of Donetsk and Lugansk, how important their votes are for Russia, and were promised to significantly improve the socio-economic situation after the elections. Besides that, the electoral lists themselves contained well-known personalities for the local population. For example, the United Russia included in its Rostov regional list the former “head of the DPR government” Alexander Borodai, and the list of Just Russia – For Truth included the writer Zakhar Prilepin, who became one of the main frontmen of the so-called Russian spring.

There were no polling stations in the occupied territories. Inhabitants of the occupied part of Donbass who received Russian passports were taken to the neighboring Rostov region of Russia, where 15 polling stations were available to them. According to Kirill Vyshinsky, a member of the Presidential Council for the Development of Civil Society and Human Rights, more than 1,400 bus trips have been organized for this purpose. In addition, the “new Russian voters” could vote online. To do so, they had to get a Russian insurance number, which, by the way, for many was the main motivation for participating in the elections, because they hoped that sooner or later they would receive Russian social benefits with its help. But the reality is that without a residence permit on the territory of Russia, nothing has been paid to anyone so far. Consequently, the insurance number was offered exclusively for participation in the elections.

According to Vyshinsky, about 150 thousand inhabitants of the occupied Donbass have voted in the current elections to the Russian State Duma. Considering that as of July 2021, more than 600 thousand people received Russian passports, only a third of the inhabitants of the occupied territories who received Russian passports were involved in the elections.

By actively involving inhabitants of the occupied Ukrainian territories in the current electoral process, the Kremlin pursued at least two goals. Firstly, the Russian leadership thus wanted to guarantee itself additional votes for United Russia, which is associated with Vladimir Putin by the majority of residents of the occupied territories. It is unlikely that the regular victory of Putin’s party, which was predetermined even before the elections, at least somehow depended on additional votes from the Donbass “republics”. But these votes – and Russian politicians and political scientists do not conceal this – were needed by the authorities simply for mass character.

Secondly, and more importantly, the very fact of participation of the inhabitants from occupied territories in Russian elections was important for the Kremlin. Speaking to the whole world about its commitment to the territorial integrity of Ukraine and the need to fulfill the Minsk agreements, Moscow is at the same time carrying out the gradual integration of the occupied Ukrainian territories into the Russian political space. And the Kremlin is not at all ashamed of such actions. On the contrary, it speaks openly about it. Thus, on the eve of the elections, Dmitry Sablin, the State Duma deputy from the United Russia said that “an experiment on reuniting this territory with Russia” is underway in the Donbass. Also, according to him, in the next elections in the Russian-occupied part of Donbass, Russian majority electoral districts will be created.

Given all the above mentioned, the following conclusions can be made. When Russia issues its passports in occupied territories of the Donetsk and Luhansk regions and uses their inhabitants in its electoral process, while a representative of the Russian party of power speaks openly about conducting an “experiment on reuniting this territory with Russia” – the Kremlin’s constant talks that what is happening in the east of Ukraine is its internal conflict and that Russia has nothing to do with it, once again look absurdly.

The Minsk agreements do not foresee the issuing by Russia of its passports in the territory of the occupied Donbass and the involvement of the region in its electoral process. Therefore, on the one hand, constantly accusing Ukraine of non-compliance with the Minsk agreements, Russia instead, by its abovementioned actions, destroys the text of the agreements, on the implementation of which it insists, and does everything in order not only to destroy the peace process, but also to make the reintegration of the temporarily occupied territories impossible for Ukraine. By the way, the EU also claims that elections to the Russian State Duma on the territory of the occupied Donbass contradict the Minsk agreements. According to the head of EU diplomacy, Josep Borrell, “The Russian Federation‘s decision to involve residents of the non-government controlled territories of the Donetsk and Luhansk regions in Ukraine in the State Duma, regional and local elections runs counter to the spirit and objectives of the Minsk agreements”.

And most importantly, the participation of the inhabitants of the Russian-occupied territories in the Russian electoral campaign suggests that in the near future we shouldn’t count on the settlement of the conflict and on the real restoration of the territorial integrity of Ukraine. On the contrary, by issuing Russian passports and making inhabitants of the occupied territories full-fledged participants of the Russian political life, Moscow is actively expanding its field of action against Ukraine, which could be covered up by the slogans of protection the interests of Russian citizens.