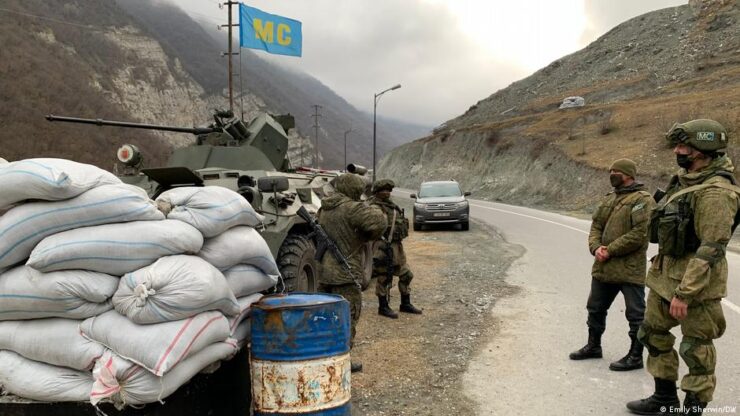 One year after the 2020 Karabakh war: What next

On September 27, 2020, Azerbaijan launched a large-scale military offensive against the non-recognized Nagorno Karabakh Republic. The atmosphere immediately before the war was quite tense in the region, and many experts were openly discussing the possibility of the resumption of hostilities. The negotiation process was in an impasse, and the July 2020 escalation along with Armenia – Azerbaijan border was a sign that some drastic changes were looming. Azerbaijan chose the right timing. The US was occupied by the 2020 Presidential elections, while Europe sought to overcome the COVID crisis. The most influential player in the region, Russia, wanted to deploy its peacekeepers in Karabakh either through agreement or due to the war. Before 2020 Armenia and Azerbaijan were against Russian plans. Baku did not want to provide Kremlin a new tool for pressure, while Armenia was interested in keeping its role as a sole guarantor of Karabakh security. However, closer to 2020, Azerbaijan apparently agreed to the Russian conditions viewing it as the only viable way to change the status quo. The transformation of Russia – Turkey relations from adversarial paradigm into cooperation/competition stance played a role in bringing Azerbaijan closer to Kremlin.

Meanwhile, the Armenian new government continued its defiance, rejecting the Russian plan and anything discussed before the 2018 Velvet Revolution. In these circumstances, most probably Russia, Azerbaijan, and Turkey reached some understanding to force Armenia to accept the Russian plan by allowing Azerbaijan to start the war with the direct involvement of Turkey. It is not easy to assess what was the initial plan – to bring Azerbaijani troops closer to the borders of the former Nagorno Karabakh Autonomous Region, and deploy Russian peacekeepers along that line, or the Azerbaijani control of Shushi was part of the initial agreement and the prize, which made worthy for President Aliyev to agree to the deployment of Russian troops.

We can not exclude the option that as Azerbaijan continued its advancement during the war, it might be tempted to break the understanding with Russia and seek to take the entire Karabakh. It would be the ideal outcome for Azerbaijan as it would make any deployment of Russian peacekeepers in Karabakh meaningless. Turkey might support this plan as well. According to the Turkish logic, it would be beneficial for Azerbaijan, and If Armenia loses the entire Karabakh, Turkey may offer Armenia to normalize bilateral relations. At least theoretically, the loss of Karabakh and normalized relations with Russia might make Armenia rethink the necessity of hosting a Russian military base and Russian border troops or reconsider its membership into CSTO and the Eurasian Economic Union. The puzzling events of the last days of the war have left some unanswered questions. Azerbaijani forces entered Shushi on November 6, and on November 7, authorities evacuated Stepanakert, effectively leaving few people there. It seemed that conditions were ideal for Azerbaijani troops to walk from Shushi to Stepanakert and thus finish the business. However, this did not happen. Then only 6 hours before the signature of the November 10, 2020, trilateral statement, Azerbaijani forces shot down a Russian military helicopter very close to Armenia – Azerbaijan border, thus creating a reason for the Russian military response. After the incident, there were unconfirmed reports about the missile attack on the Baku neighborhood, just as leaders of Armenia, Azerbaijan, and Russia were going to sign the statement and stop the war. We may only speculate that the incident with the Russian helicopter provided Russia a solid argument to prevent Azerbaijan’s refusal to sign the November 10 statement.

At the end of the day, Russia and Azerbaijan emerged as the primary beneficiaries of the 2020 Karabakh war. Azerbaijan took control of approximately 8500 square km of territory, including 30 percent of Nagorno Karabakh Autonomous Region, while Russia deployed its troops in the remaining 3000 square kilometers of Karabakh, effectively transforming it into the Russian protectorate. Turkey might be displeased that it was not a part of the November 10 statement, and Turkish troops were not deployed along the new line of contact between Nagorno Karabakh and Azerbaijan and were stationed in a joint Russia – Turkey monitoring center outside Karabakh. However, Turkey has significantly increased its influence in Azerbaijan, especially over its armed forces, which may give Turkey a significant advantage in the longer run.

As Armenia lost its control over Karabakh and Nikol Pashinyan’s Civic Contract party won the June 2021 early parliamentary elections in Armenia, the region has moved closer to the next stage of transformation. The new Armenian government states its desire to launch an era of peace in the South Caucasus and speaks about positive signals from Turkey on the normalization of bilateral relations. Simultaneously, the Armenian government used very vague language on Karabakh in its new program. There are no mentions of the Nagorno Karabakh Republic, and the government only speaks about the necessity to solve the problem based on the OSCE Minsk group’s principles and elements. Russia pushes forward the restoration of communications between Armenia and Azerbaijan through a trilateral working group chaired by Vice Prime Ministers. Armenia stated that it was ready to start the delimitation and demarcation of its borders with Azerbaijan, while Baku and Ankara talked about opening the “Zangezur corridor” to connect Azerbaijan with Nakhijevan and Turkey via the Syunik province of Armenia. Russia and Armenia state that the trilateral commission does not discuss establishing the corridors but seeks opening up of communications. Russia made positive statements about the possible normalization of relations between Armenia and Turkey, saying that after the Karabakh war (which means after Armenia lost Karabakh), relevant conditions exist to start the process. Meanwhile, the US and France, as OSCE Minsk Group co-chairs, are making statements about the necessity to re-launch the negotiation process under the Minsk Group auspices and are emphasizing that the Karabakh conflict has not been resolved yet and the status of Karabakh should be fixed.

It is challenging to predict what may happen in the region, even from a short-term perspective. However, there are many indicators that Armenia and Azerbaijan are close to signing a document, not necessarily a peace agreement, to outline the principles of delimitation and demarcation and launch the process. Immediately after that, the Armenia – Turkey public process may start, resulting in establishing diplomatic relations and Turkey’s decision to open the border with Armenia. Strategically, we will see less and less Western, first of all, American involvement in the region. As in some other regions, multipolar regional order may soon arrive in the South Caucasus.