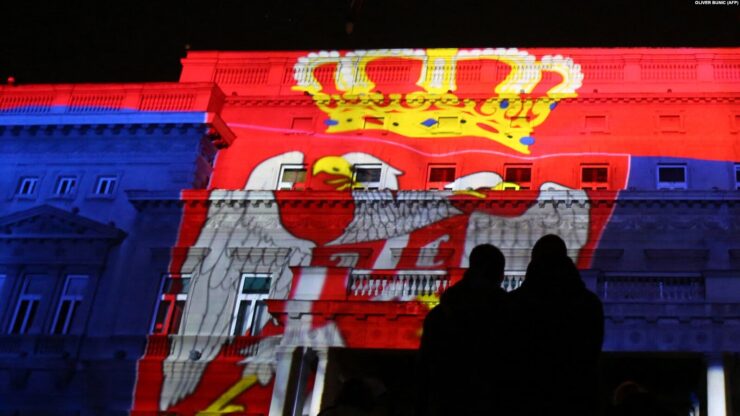 For months, Aleksandar Vulin, the Serbian interior minister and one of the leading loyalists of President Aleksandar Vucic, has been building a narrative which is reminiscent of the Serbia and FR Yugoslavia leader Slobodan Milosevic’s policy and implies national and political gathering of 1.3 million Serbs living in the region.

“Vucic should create the ‘Serbian World’. Belgrade must gather all Serbs in and around itself, and the president of Serbia is the president of all Serbs,” said Vulin on September 26, 2020. “If we had the courage to draw (the maps) and say where we live while living in the two former Yugoslavia, we wouldn’t have been talking about this today”, he added.

His deeply irrational and anachronistic project of ‘Serbian World’ is triggering unease among Serbia’s neighbors, decades after similar calls led to the bloody wars of the 1990’s.

Alexandar Vucic is publicly distancing himself from the idea launched by the leader of the Movement of Socialists and one of the founders of the Yugoslav Left party, which was led by Slobodan Milosevic’s wife. At that time Vucic was the minister of information and as radical unsuccessfully tried to redraw the internal borders of the former Yugoslavia and create a single Serb state. Today in a country where Vucic has absolute power, “distancing” or “disagreement” is interpreted as a farce and part of a deliberate game that assigns president the role of a peacemaker during the heated relations in the Western Balkans, to which Belgrade’s populist and nationalist policy makes a colossal contribution. And Vulin is Vucic’s alter ego. Unsanctioned and influential Serbian minister continues to warm up the atmosphere of the unfinished war. Thus, it is not surprising that Vulin is asking for the building of a monument to Milosevic, who by death escaped to be convicted of crimes against humanity in The Hague Tribunal.

Authorities in Belgrade do not deny the politicization of controversial ‘Serbian World’ project, but defend it with the argument that it is a response to the threat to the Serbian collective identity. On the one hand, the advocates of the ‘Serbian World’ deny any territorial claims. For instance, Vucic, a former ultranationalist who advocated the expansion of Serbia’s borders at the expense of its neighbors, claims that Serbia is not threatening anyone nor having the intentions to change borders in the Western Balkans. On the other hand, his critics, who can only state that the main protagonists of Milosevic’s policy have returned to power in Belgrade, are convinced that ‘Serbian World’ is a euphemism for ‘Greater Serbia’.

Vulin’s statements have the same effect as the non-paper attributed to Slovenian Prime Minister Janez Jansa, where the redrawing of borders, creating the ‘Greater Serbia’ and the ‘Greater Albania’, as well as dividing Bosnia and Herzegovina between Serbia and Croatia are described in detail. While abovementioned non-paper was strongly condemned in Brussels, Vulin in his turn expressed a surprise about “why the borders of the Balkan states are unchangeable and why the Serbian national question would not be finally resolved by uniting Serbs in one state”.

It is quite possible that the idea of changing the borders is unrealistic, but the idea of the ‘Serbian World’ in the way Vulin interprets it, fails to hide the ambition of official Belgrade to politically subjugate all Serbs outside Serbia and to instrumentalize them for its increasingly confrontational policy in the Balkans. What makes the idea of the ‘Serbian World’ even more dangerous is a kind of concordat between the government and the Serbian Orthodox Church, because that is how party voters and believers gather on the ‘Greater Serbian’ project.

Today Serbia is trying to emphasize close ties with the Serbian population in all countries in the region. In 2017, the presidents of Serbia and Bosnia and Herzegovina’s entity of the Republika Srpska announced the Declaration on the survival of the Serbian people in the region, which fate is still unknown.

Vucic has already achieved the ‘Serbian World’ in the north of Kosovo, where the party of local Serbs, the Serbian List, has secured an absolute control by blackmailing and instilling fear among the Serbs who have been passively watching how the solution of the Kosovo problem drag on for two decades.

In Montenegro, Belgrade supports in various logistical ways the local pro-Serbian vassal politicians from the Democratic Front. However this spoiled relations with Prime Minister Zdravko Krivokapic and caused a direct conflict with President Milo Djukanovic who accuses Vucic of a “reckless offensive” against Montenegro and compares him to Hitler. “This is about a new expansion of Serbia towards its neighbors, about new expansion in the region, with the obvious intention of Serbia to establish a status of colonial ruler over imaginary Serbian areas, the areas where Serbs live”, Djukanovic says.

The antagonism that the ‘Serbian World’ spreads in the region could be detected in the negative reaction of official Belgrade to the participation of Boris Milosevic, a Deputy Prime Minister of Croatian government and ethnic Serb, in celebrations marking the 1995 military operation that sparked a Serbian exodus, which was interpreted not as a gesture of normalization and renewal of trust, but as national betrayal. Moreover, on May 9, Vulin accused Croatia of being created by “violent secession” and the break-up of the former Yugoslavia and that by recognizing Kosovo in 2008, it “tried to break up Serbia”. “I am still waiting for an answer as to why the dismemberment of Serbia is a contribution to peace, and the unification of Serbs is a contribution to unrest in the Balkans”, Vulin wonders. In response, Croatian President Zoran Milanovic says that the authorities in Belgrade are talking nonsense about the ‘Serbian World’.

The most dangerous field of action of the ‘Serbian World’ is Bosnia and Herzegovina. Minister Vulin directly supports the Republika Srpska long-term leader Milorad Dodik’s separatist efforts to “overthrow” the neighboring country and to ensure the unification of the “two Serbian states”. “Our country is not Bosnia-Herzegovina, it is Serbia”, Dodik said ignoring the catastrophic consequences. Restoring the ‘Greater Serbia’ project and any violation of the Dayton Peace Accords would open the door to an armed conflict.

By promoting the ‘Serbian World’, Vulin is trying to transplant Putin’s idea of a ‘Russian World’ into Serbia and the region. “There are coincidences and similarities, but there is a key difference, because while trying to copy Russia, Vucic forgets that the role of Russia and Serbia in the world is not the same. What the West tolerates Russia, will not tolerate Serbia”, Gennady Sisoyev, a correspondent for the Russian Kommersant in the Balkans said.

Vulin sees the ‘Serbian World’ as a “political and state space” that should be achieved without a shot being fired. Although there is no capacity for military conflict, his project could cause lot of the problems in the region. Serbian minister estimates that the current geopolitical and international circumstances “do not go hand in hand with the unification of all areas where Serbs live into a single state union”, but he believes that this will happen “in ten, twenty or fifty years”.

Thus, the ‘Serbian World’ project is far from being harmless. And the region could recently be convinced that it is not just about Vulin’s “thinking”. Serbs were told to display thousands of national flags wherever they live in the region or the world to mark “The Day of Serb Unity, Freedom and the National Flag”.

One should stop the ‘Greater Serbia’ demon before it’s too late. But don’t count on Vucic to do that.