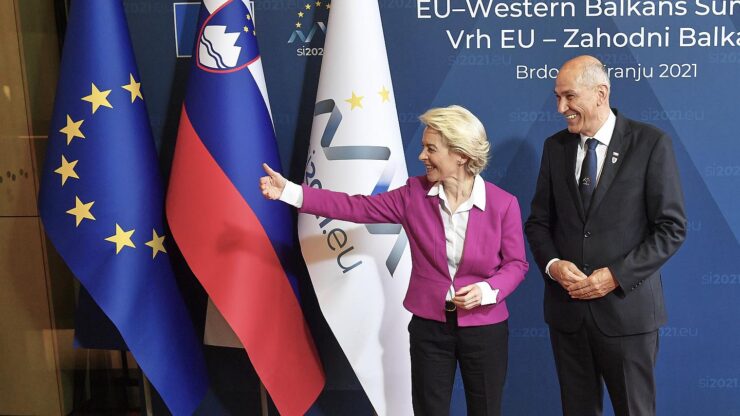 What next after Kranj?

Prior to the EU-Western Balkans summit held in Brdo castle near Kranj, Slovenia, expectations were so low that the very fact that the word “enlargement” found its way to the conclusions of the Council has been presented as a success (“The EU reconfirms its commitment to the enlargement process and its decisions taken thereon, based upon credible reforms by partners, fair and rigorous conditionality and the principle of own merits”.) The EU has been facing a crisis of credibility for several years now, ever since it became clear that not much will come out of, first, Juncker’s “promise” of membership by 2025 for “frontrunners”, and second, document that outlined what was meant to be “credible enlargement strategy” back in February 2018. Meanwhile, several processes that were meant to serve as a stopgap – most notably, common regional market coming out of the Berlin Process, and European Commission’s “flagship initiatives” – haven’t really took off, mostly because of the lack of commitment and uncertainty among “the Six”, where these processes will lead (them). For some, full membership remains the only option, while others, perhaps open to the idea of, for instance, membership in stages (or by policies), fear the reaction of the electorate. The debate is on, however, and there are several proposals of what to offer the Balkans if, as many like to tout, enlargement as we know it is “dead”.

The citizens will not pay too much attention. Time is the most expensive commodity, and people of the Balkans have been in this process for a good part of the last two decades. There is still the “promise of Thessaloniki”, and countries have tried to, for a period of years, align their policies accordingly. This has been a mutually beneficial process; the EU had concrete proof of its ability to influence and inspire change (many concepts were built around the idea, the notion of its supposedly “normative”, “transformative” power). However, repeated crises have turned this ambitious EU into an institution that is more inward looking, and more concerned with protecting – which is natural – the well-being of its citizens. Even the rational argument that WB6 taken together are less populous than Romania, hasn’t echoed since the price of accepting it (them) into membership seems too high. Enlargement has become an issue of politicking in France, used to be one in Great Britain, Austria, and a number of other countries as fears over (irregular) migration and conflict spillover remain. And to be honest, we haven’t really helped ourselves; politicians present a vision of a region in discord, few steps away from renewed conflict, and are above all interested in “capturing” the state – its institutions, so they could stay in power indefinitely. No one, starting with Germans and the French, is willing to give us a date, because that would mean commitment and political obligation which the opposition (always in a “race to the bottom”) might use to increase its chances.

The reasons for opposing the rapid enlargement are well known to us so far – one is colloquially called “Macron’s veto”, although there are countries that are “hiding” behind France in its insistence on more stringer procedures and track record before letting anyone in; second, the fear of “new Orbans” in the EU, i.e. members that, like Hungary and Poland, will call into question the primacy of Union’s values or law; and third, a number of unresolved bilateral issues (which can, paradoxically, only be resolved in the framework of European integration).

There are several things the EU should do now. To open negotiations with Northern Macedonia and Albania, probably goes without saying. Finally liberalize visa regime with Kosovo. Perhaps to close a chapter or two with Montenegro. But also, to open a debate among the members on how the enlargement process will continue. At the insistence of France, we got a new methodology – epitomized by clusters into which related chapters are now grouped. Already, for some countries like Serbia, there are three “blocking” chapters (23, 24 and 35), and if the Commission finds that no progress has been made, there will be no opening of new ones. (Given Serbia has not opened a chapter since December 2019, one could argue there is “fair and rigorous conditionality” already.) Now Brussels must decide how to approach the candidates. The focus on the rule of law remains (which is “in the European DNA”, as Charles Michel has noted); but there is also a dilemma, whether to open some of the clusters (i.e., the one on environment), ideally tying the candidates even more for a number of years (as there can be no realistic expectation that Serbia or any other country will meet them soon). A concrete list of benchmarks could be made widely known, passing the proverbial “ball” to the candidate’s “court”.

Despite many panel titles, the EU is not at risk of “losing” the Western Balkans realistically; economic exchange, standards of living, new ideas, framework for reform, all of that has predominantly come from “the West”. However, values-wise, the EU is losing ground and repeated public opinion polls show this (as a) trend over the last 5 years. When one takes perception of power in international relations, China and Russia seem to be on the rise, with the EU and the West in general retreat. Because it so much depends on the cooperation with the host (candidate) country, the EU is not good at communicating, or “selling” its “product”. And because it takes too much time to react, it has missed some important cues.

Executive Director of the Belgrade Fund for Political Excellence