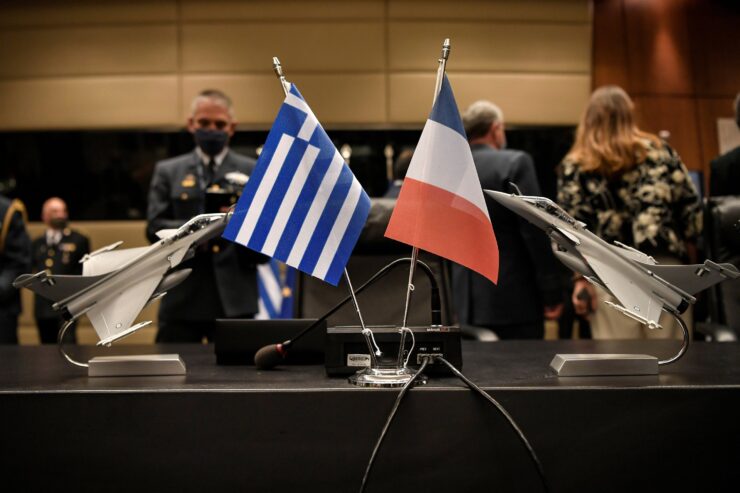 The Franco-Greek Defense Deal and Its Regional and Geostrategic Dimensions

Earlier this month, the Greek parliament approved by a majority an unprecedented 3 billion-euro agreement with France on defense co-operation and military supplies. It envisions Athens to receive from Paris by 2025 at least three state-of-the-art frigates for its navy, which needs a major modernization if it is to withstand the frenzied arms race with Turkey. The two countries have repeatedly found themselves on the brink of a major military confrontation in recent decades because of their rivalry in the Aegean and the Eastern Mediterranean, where they face a number of unresolved territorial and border issues and economic controversies over control of energy resources under the seabed. The last such sharp conflict between them erupted last summer.

Earlier this year, Greece negotiated with France the purchase of 18 new Rafale fighter jets, as well as six more refurbished ones, which will be received by early 2023. The deal is worth nearly 7 billion Euros. These fighters will be fully integrated and compatible with the relevant state-of-the-art French combat operating systems for naval-air force interaction. This marks the beginning of the integration of the armed forces of the two countries, which are already building, in competition with Ankara, an allied network in the region through coordinated military cooperation with Egypt, Israel and the UAE. This process has intensified especially after attempts by Turkish warships to provoke clashes with Greek military vessels off Cyprus and French vessels off Libya last year. According to Emmanuel Karagianis, an international security expert at London’s King’s College, “the Franco-Greek defense agreement is designed to contain Turkey’s regional ambitions”.

Undoubtedly, strong French support is particularly important for Greece against the backdrop of the over-ambitious program of rearmament and modernization of the Turkish armed forces, systematically implemented over the last decade by President Erdogan’s regime despite the country’s serious economic and financial troubles. Athens is fully aware that it cannot withstand this race on its own, even if only because of the enormous difference in the scale and resources of the two countries.

The 300-seat parliament in Athens approved the agreement by 191 votes in favour and 109 against. The leftist opposition Syriza party voted against the accord, arguing that it was “strategically sound, but too expensive”.

Prime Minister Mitsotakis told parliament that the deal “shields” Greece“ in a troubled Mediterranean”, saying that Athens had been trying to secure such an agreement since 1974, when Turkey invaded neighbouring Cyprus which has a majority Greek-Cypriot population. “In the event of an attack, our country will have the backing of the strongest army on our continent… For the first time it is clearly stipulated that there will be military assistance in the event of a third party attacking one of the two states”, Prime Minister Kyriakos Mitsotakis told lawmakers before the vote, actually revealing that this is not just a contract for the purchase of French weapons, but a military pact between the two countries.

“And we all know who is threatening whom with a casus belli (cause for war) in the Mediterranean”, he added. This was a clear reference to Turkey’s threats to go to war with Greece if the country declares a 12-nautical-mile sovereign maritime space around its islands, as it has a right to do under international law.

All NATO allies are required to come to the aid of a member state that suffers aggression, but the decades-old tensions between Athens and Ankara are complicated by the fact that Turkey is also a member of the Atlantic alliance.

Turkey, of course, lashed out at the Franco-Greek pact and warned that it would threaten regional stability by “isolating” Ankara.  Turkish foreign ministry spokesman described it as a bilateral military alliance formed against fellow Atlantic alliance member Turkey “in a way that harms the NATO alliance”.

The agreement is very important for France too, and not just for economic reasons, as it will pour several billion euros into the French arms industry, which is subject to fierce competition, mostly from the United States and Russia, on the international arms markets. It comes just two weeks after Australia surprisingly canceled a much larger deal to supply French submarines.

The shock for Paris was huge for the sudden loss of an almost certain contract for 66 billion dollars. But even more humiliating for France was the fact that the blow came from NATO allies, the United States and Britain, who allied against Paris and seduced Canberra to give up French submarines and replace them with American and British ones with nuclear engines.

Paris does not hide its great disappointment with the two key NATO allies outside the European Union. The deal with Athens, the details of which are to be finalized by the end of the year, was a small diplomatic victory for prestige. It reaffirms France’s growing commitment to the security in the Eastern Mediterranean and creates a new balance of power in the region, despite Turkish objections.

Macron did not fail to note that he is also investing in it a much broader intention, far beyond the framework of bilateral defense cooperation. Speaking at a press conference in Paris after the agreement was signed, he pointed out that it reaffirmed his vision of “European autonomy” at a time when Washington is much more committed to the Indo-Pacific region in order to limit the growing Chinese influence.

“The Europeans must stop being naive, – he stressed in the presence of the Greek Prime Minister. – When we are under pressure from powers… we need to react and show that we have the power and capacity to defend ourselves. Not escalating things, but protecting ourselves”.
“The Unites States are our great historical friends and allies in terms of values… but we must see that for more than 10 years the Americans first focus on themselves and have strategic interests reoriented toward China and the Pacific. We must, as Europeans, take our part in our own protection. This isn’t an alternative to the alliance with the United States, nor a substitute for it, but we should take responsibility of the European pillar within NATO and draw the conclusions that we are asked to take for our own protection, – Macron added, referring to the transatlantic security alliance. – We have a commitment to the independence of Europe. This is part of the common struggles we have undertaken in Europe – technological independence, a European defense, and combat-readiness”.

Mitsotakis also emphasized the “Euro-Atlantic dimension” of the agreement, calling it “the first bold step towards strategic autonomy in Europe”, which he said will not be opposed to NATO. “History… wants us together,” he said turning to the French President in Paris on September 28th. “So is geography”.

Autonomy, of course, does not mean independence, but often serves as the first step towards such a goal. It is unrealistic to believe that Europe was rushing to withdraw from NATO, but building such new structures puts in doubt the viability of the bloc and again provokes debate why it still exists in the 21st century long after the Soviet Union has gone in history with no chance of returning.

Reviving the idea of “European strategic autonomy”, Macron is sending a message not only to Moscow and Beijing but obviously to Washington too even though he is trying to reassure that this is not a “substitution” for an alliance with the U.S. Despite those reassurances from Macron and Mitsotakis, most observers could not fail to notice that their deal includes a mutual defense pact against any attacking country, even if it is a fellow NATO member, thus supplanting the bloc as their respective country’s premier defense alliance.

This in itself does not go well with front line NATO countries like Poland and Lithuania, who are opposed to pan-European defensive structures and prefer to enhance U.S. interests on the continent. Western observers warned that some, mainly Eastern European, countries like Poland for example may now be encouraged by the US to seek their own extraordinary guarantees outside NATO.

This leads to the conclusion that the biggest challenge to the prospect for a common European defense or establishing a European army is not necessarily coming from Washington as it becomes increasingly disengaged from the continent and the Middle East in order to focus on the Indo-Pacific region. Such resistance originates from within Europe itself. Although Europe has discussed its own “strategic sovereignty”, as the French call it, the bilateral agreement between Paris and Athens is the first concrete action in this direction with no immediate prospects for others to follow.

But Macron obviously intents to push on his idea. His immediate reaction to the so called “AUKUS betrayal” (Australia-United Kingdom-United States) has promptly shown that France can still play a major role in regional developments, outside strict NATO limits. An EU leaders’ summit dedicated to European defense will be convened by European Commission President Ursula von der Leyen and Macron in the first half of 2022 when France holds the rolling presidency of the EU.

Moving Europe towards more sovereignty over its security affairs will be a long process. France is adamant about the need to move more quickly, especially after the “betrayal” of the allies who spoiled the French plans. Paris hoped that in the post-Trump era Washington’s attitude towards Europe would change. But Biden’s policies during his first months in office indicate no such change.

Still Macron may soon prove right that those in Europe, especially Eastern Europe, who are hoping to maintain the status quo of U.S. dominance, will soon have to conform to the new regional order or be left behind as France reshapes the continent’s security structures.