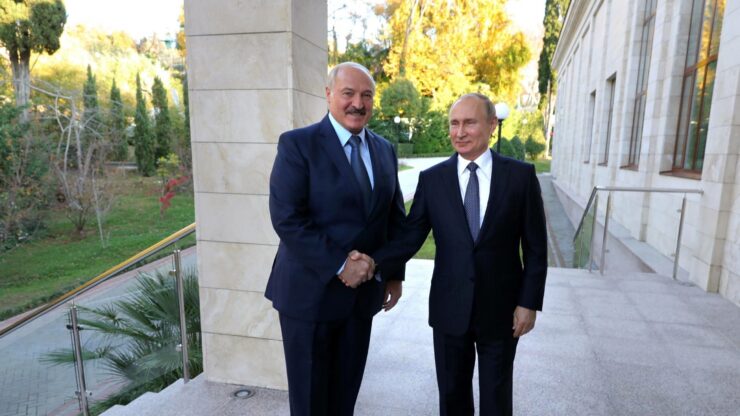 Brinkmanship on the Polish and Ukrainian borders – and playing the “Belarus card” with gas and refugees – seem to have rebounded on Russian president Vladimir Putin, setting back his campaign to force Western acceptance of his two new gas pipelines

It isn’t every day that TASS, Russia’s prime news agency, recalls a news item. But it happened last week. Specifically, on November 11, TASS withdrew its report of a phone call between Mr Putin and his Belarussian counterpart Alexander Lukashenka discussing the crisis involving Afghan and other migrants on the border between Belarus and Poland.

It was an odd move in at least two respects.

First, it was almost entirely futile. TASS-approved content is instantly relayed by all major media – TV channels, radio networks, news websites – between them reaching millions of readers and viewers. Once it’s out there, it’s out there. TASS can’t recall it in any meaningful sense. Yet it tried. Or, more precisely, Mr Putin personally tried: for no-one else would have had the power to recall that particular story.

Mr Lukashenka seems to have been on Mr Putin’s mind last week. On November 11, too, came the Belarussian foreign ministry’s announcement that the country had formally recognised the 2014 annexation by Russia of Crimea – certainly significant because it had been withheld for so long by the normally compliant Lukashenka government. And the very same day saw a public threat by the Belarussian boss to cut off the gas supply to Europe via the Yamal Pipeline, which runs through Belarus on its way from West Siberian gas fields to consumers in Poland and Germany.

Mr Putin distanced himself from that – though only two days later – saying pointedly that such move had not been discussed with him and that, if taken, it would harm relations between Moscow and Minsk. Arguably Mr Lukashenka – essentially a pawn, for all his grandstanding, and totally dependent on Gazprom – would not have spoken without clearance, so the episode can probably be seen as a “good cop/bad cop” double act designed to scare Europeans. The Kremlin’s game plan relies on the Yamal gas pipeline to exercise leverage on Poland, as is evidenced by a sequence of stoppages and reverse flows from Germany immediately before Mr Lukashenka aired his threat.

However, that may be, Mr Putin has been keen to distance himself from his Minsk henchman twice within three days. He evidently prefers the pose of mediator, the wise man who is not in charge of the “unpredictable” Lukashenka – and is not controlling the situation on the border of Belarus and Poland. And if the Yamal incident was devious double-act, the TASS recall can hardly be interpreted as anything other than faux pas and confusion. Mr Putin looks very much as if he is under stress.

The explanation is that, as far as his relations with the West are concerned, the Russian president already has his plate full of hot potatoes and can do without Mr Lukashenka raising the temperature still further. There’s a much broader and more substantial setting of a geostrategic storyline in development and Mr Putin can’t afford complications.

The Kremlin’s tactics of brinkmanship have always relied on willing partners in the EU. With German Chancellor Angela Merkel soon to depart now, Putin will lose his top asset. Hence his haste to escalate and defuse a conflict while he can still use her services. The deal Mr Putin wants to achieve is: mitigation or partial repeal of the sanctions in place against Belarus, in exchange for solving the refugee crisis on Poland’s border.

It’s vital for both Mr Putin and Mr Lukashenka to get that deal. For the latter, it’s a matter of survival. Sanctions are proving costly for the Belarussian dictator’s regime, and could well be fatal, producing social discontent, unemployment and a drop in living standards that could prove too much for Belarussians – and leave Mr Putin facing another “colour revolution” on his borders.

For Mr Putin, it’s a matter of his place in history as well as medium-term geopolitics. Having failed to bring Ukraine (“Little Russia”) back into the fold, his only chance to be remembered as the “new Alexander Nevsky”, as unifier of the Russian lands after the fall of the Soviet Union, is to integrate or annexe Belarussia (“White Russia”). But Belarussians are learning the hard way that the cost of their leader’s aggressive policies at home and abroad will only skyrocket if they opt to join their giant and belligerent neighbour, Russia.

But it’s not just about Belarus. The bad news for everyone else is that the Kremlin will continue to exacerbate relations with the EU and NATO to the point of red-hot confrontation with Ukraine and Poland – and along the whole frontline from the Baltic to the Black Sea.

Of course, that’s hardly a new thing. Military drills along the Ukrainian border have become routine in recent years, each time Mr Putin seeks to extract concessions from the EU and NATO. It’s not much different today, in the context of the endgame around the certification and coming online of Nord Stream-2, as the Russian president seeks to convert Germany’s dependence on Russian gas into tangible geopolitical gains.

The timing is perfect: there’s a cold winter ahead and gas reserves in Germany, Austria, and the Netherlands are inadequate, which precludes strong reactions to Mr Putin’s sabre-rattling and gas warfare – or at least, that’s probably what the Kremlin reasons. And there’s another time factor, as noted above: a political window of opportunity is closing, as Ms Merkel’s final departure from power will mean the end of her grip on the EU’s foreign policy. Best make use of this key asset while it’s still in place.

Think again, Mr Putin: you may find you have to do more TASS recalls in future.

For all that sabre-rattling now appears to be provoking some reaction other than apathy or timorousness. Recently top US representatives briefed allies at NATO HQ in Brussels on Russia’s potential plans to attack Ukraine. And the signs are that they were taken very seriously indeed, that a sobering process has been triggered within NATO on the subject of existential threats and how to address them. If it indeed goes that deep, the implication for Mr Putin is clear: a quick military win, as achieved in Georgia in 2009 or Ukraine in 2014, is not on the cards – even if Germany chooses to remain on the sidelines.

For the West, it’s as simple as this: if NATO fails to act in the current crises involving Poland and Europe’s advance line of defence against Russia, Ukraine, then Mr Putin will have a free rein in Europe, and NATO’s protection will be discredited. So for NATO it is Hamletian, and not to be is not an option.

In the meantime, Mr Putin’s chances of proceeding with Nord Stream and Turk Stream and locking his pincers around Ukraine have dwindled. For this is no longer a business game. It’s a war game.