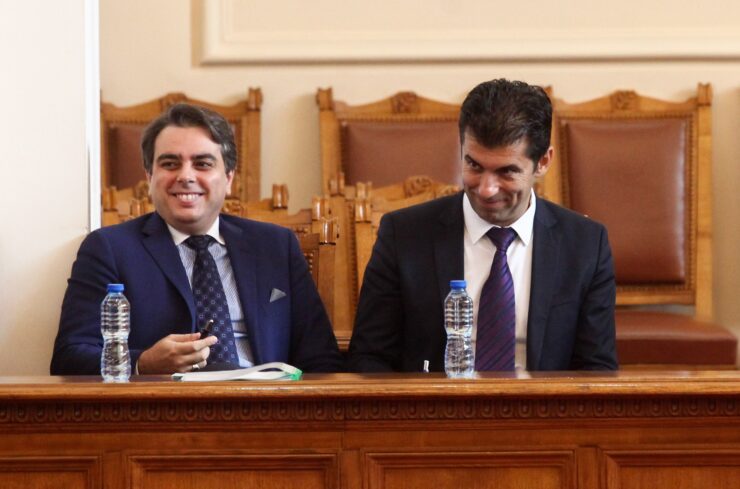 The Harvard whiff in Bulgarian politics

On November 14th, Bulgarians elected a new parliament – the third in a row this year. At the first elections in April, GERB, the party of Boyko Borissov, who has ruled the country most of the time after 2009, won the most votes. However, this was a pyrrhic victory – GERB had no chance to form a government because no one wanted to make a coalition with it.

At the early elections in July, a TV talk show host Slavi Trifonov came out on top. His success was a result of his personal popularity, but also of the fact that many voters gave him a mandate to end Borissov’s long rule. However, Trifonov did not cope with this task. He turned out to be an inexperienced political autist who did not want and did not know how to negotiate a coalition.

The main change that took place at the end of the summer was the emergence of a new political party in the form of two graduates of the famous Harvard University – 41-year-old Kiril Petkov and 44-year-old Asen Vassilev. They got a chance to occupy positions in the caretaker government appointed by President Rumen Radev in May this year. Petkov was the Minister of Economy and Vassilev – the Minister of Finance. The two became media favorites, revealing facts about the abuses of previous Borissov’s government. Thus, Petkov and Vassilev quickly gained the image of uncompromising fighters against corruption. In addition, they are young, well-educated, cosmopolitan and pragmatic. They both have successful careers as entrepreneurs. The leader in the tandem is Kiril Petkov, who is charismatic and very convincing in his public appearances.

In September, the president appointed a new caretaker government to hold elections on November 14th. No one was surprised by the fact that Petkov and Vassilev were not part of it – they announced that they were making a new political project and would run in the elections. The image of the two Harvard graduates did not fade even by the scandal caused by the fact that Kiril Petkov had dual citizenship – Bulgarian and Canadian – at the time of his appointment as Minister. His wife is Canadian, but the two have lived in Bulgaria with their three daughters for many years. However, the country’s constitution does not allow foreign nationals to become deputies and ministers. Petkov received a document that he renounced his Canadian citizenship only in August, and the Constitutional Court ruled that he was in violation of the law when he became a minister. However, this act has no special legal consequences and Petkov was threatened only by a small fine. And politically, he rather benefited from this scandal because he was attacked by GERB – the party that the majority of Bulgarians do not want to see in power.

Petkov and Vassilev’s entry into politics with a rolling start has led to serious concussions in the so-called protest camp, which included the pro-Western liberal coalition Democratic Bulgaria, Slavi Trifonov’s “There is such a people” and the “Stand Up!” We are coming!” coalition, which in April and July hardly overcame the 4% barrier to entering parliament. The party of the two Harvard members, called “We Continue the Change”, attracted the sympathy of a significant part of the voters of the three older “protesting” political parties.

Almost all opinion polls before the election pointed to GERB as a confident winner, which managed to keep its core electorate. As for “We Continue the Change”, the sociologists ranked it a second position.

At the end of the election day, however, it became clear that most surveys underestimated the potential of Kiril Petkov and Asen Vassilev to radically change the political landscape in the country. They won the first place by taking a quarter of the vote – 25.67%. GERB remained in second place with about three percent less, and the Bulgarian Socialist Party (BSP, former communists) surprisingly lost the third place, which was occupied by The Movement for Rights and Freedoms (MRF) – the party of ethnic Turks in Bulgaria. About a quarter of the MRF votes came from polling stations in Turkey.

Slavi Trifonov’s party lost more than half of its voters and finished with a score of 9.5%, followed by Democratic Bulgaria with 6.4%. The coalition “Stand up!” We are coming!” didn’t manage to enter the parliament.

For the first time, “Vazrazhdane” (Renascence), a nationalist xenophobic and pro-Russian party, will have a parliamentary representation. Its leader Kostadin Kostadinov successfully took advantage of the widespread anti-vaccination sentiment in the country and during his participation in election debates spoke against vaccines, masks and “green certificates”. In addition, he opposes Bulgaria’s entry into the eurozone. The success of “Vazrazhdane” is also a result of the redistribution of votes in the nationalist camp – no other nationalist party could take more than 1 percent of the vote.

The election of November 14th has once again showed that the struggle of ideas plays an increasingly smaller role in Bulgarian politics. Petkov and Vassilev won with the classic populist cliché that they would stop corruption. They also have a more detailed and detailed program, but almost no one was interested in it. The young Harvard players included mostly entrepreneurs and people with education from Western universities in their election lists, and in one of the metropolitan areas they staked on a popular rock musician. The only old party of ideological type – BSP – showed its weakest result for the last 30 years and took only 10.3%.

The new configuration in the Bulgarian parliament is not much different from the old one: on the one hand there are GERB and MRF, which are in isolation, and on the other – the so-called protest parties (“We continue the change”, Democratic Bulgaria and “There is such a people”). The BSP, which in the spring was seen as part of the “status quo parties”, has now moved on to the “protest camp”. Purely arithmetically, the protest parties cannot form a majority without the BSP. “Vazrazhdane” is out of the question because they are considered an extremist anti-systemic party and no one wants to talk to them.

The elections were followed by a wave of resignations of the leaders of parties that failed – Democratic Bulgaria, BSP, and the nationalist The IMRO-Bulgarian National Movement.

The winners have already begun negotiations to form a coalition. Kiril Petkov is a candidate for prime minister, and Asen Vassilev – for finance minister. The two are very dialogical, and they are also on the crest of the political wave, which gives them a good chance to form a government. This will put an end to several months of political instability in the country. And a regular government and parliament are urgently needed because Bulgaria is currently awaiting the European Commission’s position on the Reconstruction and Development Plan sent to Brussels last month. In the next few years, the country should receive nearly 13 billion Euros under the plan, but negotiations between Sofia and Brussels on the proposed projects are needed.

Simultaneously with the early parliamentary elections in Bulgaria, the regular presidential election was held. There was no particular intrigue there – the current head of state Rumen Radev was the favorite after receiving the support of the BSP, Slavi Trifonov and Kiril Petkov with Asen Vassilev. GERB nominated the rector of Sofia University Anastas Gerdjikov, a respected professor of classical philology. In the end, Gerdjikov managed to reach a runoff with Radev, but the difference between the two in the first round is huge – 49.4% against 22.8%. Radev’s re-election seems certain. He will remain a strong figure in Bulgarian politics, although the Constitution gives him very little power. To a large extent, Kiril Petkov and Asen Vassilev were introduced to politics by Radev, and it seems that there will be an understanding between the future government and the president.

Foreign policy was almost absent in the election debates, but there is no doubt that under the new government Bulgaria will continue to be a loyal member of the EU and NATO. However, a change in relations with the Republic of Northern Macedonia is possible.

Until now, Bulgaria has blocked the start of negotiations about membership of this small Balkan country in the EU on the grounds of “theft of history”. However, Petkov and Vassilev are not burdened with traditional Bulgarian nationalist clichés and are signaling that they will take a more pragmatic approach to the Sofia-Skopje dispute.

In conclusion – the fresh “Harvard” whiff in Bulgarian politics overshadow the former leaders Boyko Borisov and Slavi Trifonov, who were deeply provincial figures, and not only because they do not speak English. Petkov and Vassilev bring something new, more modern and more cosmopolitan. However, they are not very experienced in public administration and especially in political games, so it is not certain that the next government will run for a full term.