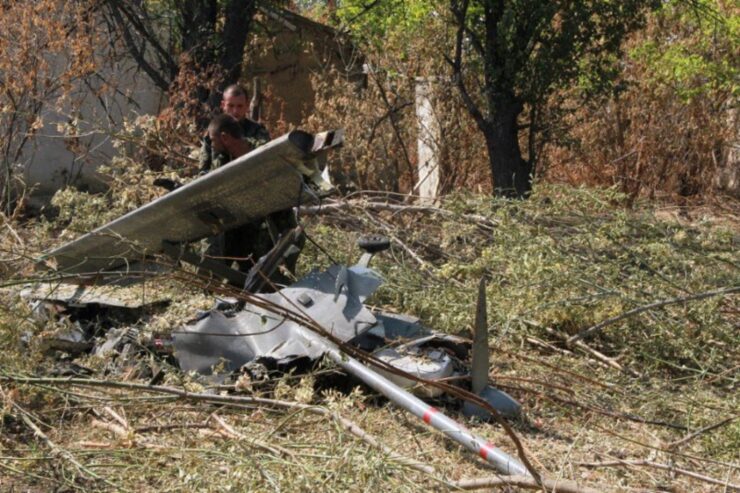 However, according to sources of FlightGlobal, the decision still allowed “follow-ups” to existing contracts, including supplying spare parts and upgrades. It wasn’t until 2016 that Israel fully suspended supplies of its drones and spares to Russia.

So, from Israel’s point of view, two shipments of Israeli drone parts to Russia somewhere between 2014 and 2018 revealed by Conflict Armament Research could have been legal if they took place prior to the 2016 ban.

However, Mykhailo Samus doesn’t back this opinion,

“The supplies prior to 2016 were actually a crime. And when we talk about the beginning of the war against Ukraine, it was the very period from 2014 to 2016 when not only Israel was making shipments to Russia. There were direct supplies from Italy, Germany, and France, there were deliveries from Israel as well. Their reasoning was that these were contracts signed before 2014, so they had the right to continue that,” Mykhailo Samus commented.

According to the expert, the most striking example of this behavior was the French contract to supply two Mistral-class helicopter carriers to Russia, signed in 2011. The framework agreement also included technology transfer by creating a consortium and building the next three ships in Russia using Russian components after 2015, when the second France-build carrier was to be shipped to Russia.

“The memorable Mistral contract was successfully averted, but Ukraine had hard times proving to France that the €2 billion for the contract would be bloody money because they would supply these ships to the country which, at the time, had effectively occupied Crimea and the Donbas, was waging an aggressive war against Ukraine. And back then the only thing to stop France was the EU Code of Conduct on Arms Exports, which clearly states that EU countries have no right to supply weapons, military equipment, and dual-use items to participants in armed conflicts,” Mr. Samus says.

Russia and France settled on compensations to Russia for the canceled Mistral contract in the late summer of 2015. The deal was worth €1.2 billion ($1.3 billion), Russia’s advance payment totaled €893 million. France had to return the prepaid money and repay Moscow’s alleged costs which included training 400 sailors, stripping off the Russian equipment, and shipping it back to Russia. In total, France repaid a sum comparable to the full cost of the deal and later managed to sell the two ships to Egypt.

As of 2014, starting from the infamous reset in relations with the US of 2010, Russia obtained and signed a huge number of contracts for the supply of weapons and technology, for dual-use goods from European countries such as Italy, France, Germany, Israel. Mykhailo Samus says these included sensitive technologies, aviation tech, and radio electronics, naval technology, and special forces equipment.

“For instance, Germany managed to build one state-of-the-art major ground training center in Russia, Düsseldorf-based Rheinmetall Group did it. They were going to build four of them, one in each military district of Russia, but managed to build only in the Western MD. These contracts were terminated, although Rheinmetall too didn’t immediately cancel them, arguing that all those were signed in 2012,” Mr. Samus says.

The Italian company IVECO had signed a contract to supply or assemble 1,775 LMV armored vehicles renamed “Rys” in Russia on Russian soil, and the company supplied Russia with them up until 2016.

France also transferred  Russia military technologies other than Mistral helicopter carriers. For example, an interior photo of a Russian tank reportedly captured in August 2014 near Ukraine’s Ilovaisk had, according to Igor Sutyagin, an expert at the RUSI think-tank, a thermal-imaging fire control system made by French firm Thales.

Mykhailo Samus says that these night-vision devices used to be supplied to Russia for many years and only after the outbreak of the war in Ukraine and the further ongoing conflict these supplies were cut.

“It’s true that sometime after 2016 these international supplies stopped at some point, but it gets really interesting here, because Russia calls, say, the Forpost UAV Russian, which is actually also an Israeli drone, it’s officially said to be made from all Russian parts,” Mykhailo says.

”But the drones shot down by Ukrainian military in the Donbas still comprise Israeli components – the problem is that Israel had managed to build an entire plant in Russia to produce its drones. So, although a drone may have ‘Made in Russia’ written outside and its name is Russian, its components may remain Israeli. And although the Israeli side says the supplies were made before the ban, it is difficult to trace how true this really is. Because it’s difficult to determine whether these components were delivered now, or they were delivered before 2016 and Russia still uses them.”

“In fact, Russia cannot substiute its imports by 100%, which is obvious, because how can you import and then produce the same Israeli drone? Even then you can make some new Russian one from local components, electronics, and so on. The fact is that Russia doesn’t have such components: any drone as an aircraft, which is, just like a plane, is a system created specifically, with its design being tested for the interaction of all its systems. If you change something, you need to actually make a new aircraft, as it happens with planes — changing some devices, systems actually requires new tests to see how it would affect the capabilities, capacities, characteristics of this plane or UAV,” Mr. Samus believes.

That is why, the expert says, he has doubts that Israel had fully canceled supplies of drone components to Russia, despite official statements saying otherwise.

As for the EU, after 2016, when there was a lot of pressure on European companies, they mostly stopped supplies, at least there are no direct confirmed military business contacts with Russia for now.

The Russians are trying to replace European components with Chinese ones. Mykhailo says that the main reason for this is the European attitude to sanctions: it makes no sense for European companies to get themselves in trouble by earning only a couple of thousand or tens of thousands of dollars from Russia because the supplies to Russia are indeed prohibited by sanctions.

“That is, in the regime of export control, this is a punishable violation, quite a serious one for a company that deals only with civilian products while its products can be used somewhere as a dual-use product or for military purposes. Especially if used in the conflict zone, it is better not to deal with such supplies to Russia, That’s why, I believe, European companies are trying to avoid that. Yet, as the Siemens turbines in Crimea show, when it comes to big money, they don’t mind it. Nevertheless, penalties and sanctions for the companies supplying the turbines are slightly different than for suppliers of military goods,” Mykhailo Samus says.

With a number of military supplies to Russia prior to 2014 and some even after the introduction of the EU sanctions, Western-European countries had unofficially banned any military supplies to Ukraine long before the Russo-Ukrainian war and this “embargo” lasts to the present day, Mykhailo Samus states,

There was another issue with Europe, especially prior to 2016 when Ukraine said the EU, “You’ve got interesting things out there: you supply weapons, military equipment and technology to the aggressor country, while Ukraine has been banned from military supplies since 2008 and from any contacts of a military-technical nature. This was then an implicit embargo on Ukraine, as Ukraine supplied arms to Georgia during the Georgian-Russian war. Nothing has changed since then: Europe — I mean Western Europe — does not supply us (Ukraine, – Ed.) with anything of this kind.

Russia became interested in Israeli drone technologies after it had countered Israeli-made drones operated by Georgia in the days of the 2008 Russo-Georgian war when Russia itself had to resort to sending fighter jets or even bombers to collect intelligence data or adjust artillery fire. In the subsequent years, Russia managed not only to purchase drones of several types in Israel, but Israel also built its drone factory in Russia so that Russia itself started manufacturing licensed Israeli drones.

Israel believed that providing Russia with its drones would gain a lever to dissuade Moscow from supplying the sophisticated S-300 air defense systems to Iran. In 2010, Russia suspended its 2007 contract with Iran, but in 2015 Putin lifted the ban and started shipping S-300 components to Iran.

Ukraine didn’t operate any military UAVs at the time of the beginning of the Russo-Ukrainian war in the late spring of 2014. However, the country could have developed drone capabilities long before the war if it were not for the reluctance of its political and military leadership of the Yanukovych era, Mykhailo Samus says.

“Israel had managed to supply drones to Ukraine, too, but the military and political leadership simply didn’t want to buy them. I know for sure that around 2007-2008, one set of Birdeye was purchased in Israel, but it seems to have remained unused in storage,” Mykhailo said.

Anyway, in September 2014, only a month after its ban of new drone contracts with Russia, Israel also banned all drone supplies to Ukraine, reportedly for maintaining good relations with Russia.

Sanctions do have an effect on Russia, despite it saying otherwise

The conclusion I can draw from the CAR study for myself is that the Russians are really experiencing huge problems due to the sanctions, huge problems from the fact that they didn’t have enough time before 2014 to obtain a full production cycle of all UAV components, and the same goes for ship technology in the Mistrals, and aviation technology, and so on. They immediately tried to solve it by turning to China, but it turned out that the Chinese components were of poor quality.

According to Mykhailo, this applies not only to drones but also to the ship engines that they tried to replace – the diesel motors that they used to buy in Canada, the United States, Finland. The lack of new quality engines causes “huge problems in the Black Sea Fleet.”

I think that as time goes on, Russia would get more and more sanction-caused problems, that’s why the Russians keep saying that sanctions don’t work, but for some reason, they are constantly trying to get them lifted.

When Euromaidan press published the key points of the report “Weapons of War in Ukraine” by the UK-based investigative organization Conflict Armament Research, it caught our eye that between 2014 and 2018, the drone manufacturer Israel Aerospace Industries supplied a sanctioned Russian defense company with UAV components produced by various European and US manufacturers, thus providing a loophole for sanctions evasion.

To understand whether it is used now, we reached out to military expert Mykhailo Samus, Director of the New Geopolitics Research Network, and found out how exactly Israeli technologies are helping Russia today, when western companies decided that it’s not worth the risk supplying war technologies to Russia, and that, paradoxically, Ukraine is still under an unofficial arms embargo from countries of Western Europe.

The interview was published at Euromaidanpress.com